How Robot Therapists Can Fill a Gap in Health Care

The health-care industry has been among the most resilient when it comes to resisting automation. Less than 30 percent of a nurse's activities could be automated, a recent McKinsey & Co. study found.

But demand for health care is so great that robots are seen as key aides to resource-constrained health-care workers. The goal is to fill a hole that leaves many patients underserved and alone.

"We are particularly motivated by autism because the incidence is so high and so many children today are diagnosed with autism," said professor Maja Mataric, who leads a team at the University of Southern California's Viterbi School of Engineering.

The U.S. Centers for Disease Control and Prevention estimates that 1 in 68 children has been identified with autism spectrum disorder. The National Autism Association says autism is the fastest growing yet most underfunded developmental disorder. This creates a great and growing demand for services that cannot be met by existing human resources. 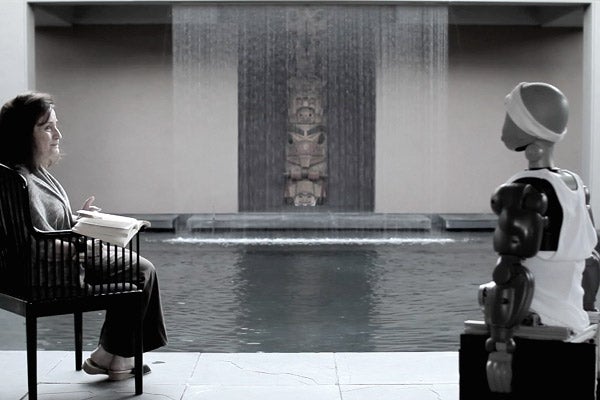 She partners with manufacturers to develop the bots -- some more human-looking than others -- which are programmed using data from USC's research. Sensors embedded in the bots gather further data on things like group interactions, including the flow of human conversation and the time it takes for a person to complete a given task. As information builds, the model improves.

Robots can help train some autistic children how to behave in socially appropriate ways and can sometimes draw out social skills that human therapists may struggle to elicit. For certain kids, robots are less intimidating than people and have the added benefit of being able to repeat behavior with consistency, which can be helpful in therapy, said Mataric. 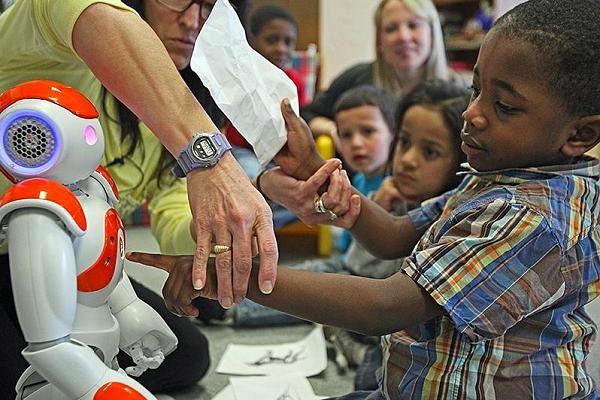 Tobi Adebayo, reaches out to the robot. The Moody School in Haverhill is one of just three places in the world using the NAO robot to work with students who have learning disabilities, including some with autism.
Image credit: Suzanne Kreiter | The Boston Globe | Getty Images

In one project, Mataric has been using her robots to help teach children with autism about sharing. The kids and the robots take turns playing a game, helping the child build an understanding of when to let others take their turn. The first step is for the child to play with the robot and the next is to introduce another child into the game.

"A key part of robot-assisted therapy is to not just have it be between the user and the robot -- it has to be with other people as well," Mataric said. That's especially true in autism, she said, "because the deficit is about social behavior."

Robots, the thinking goes, can also help break the ice for autistic kids, who have difficulty making friends.

"Play with children with autism doesn't happen very much," she said. 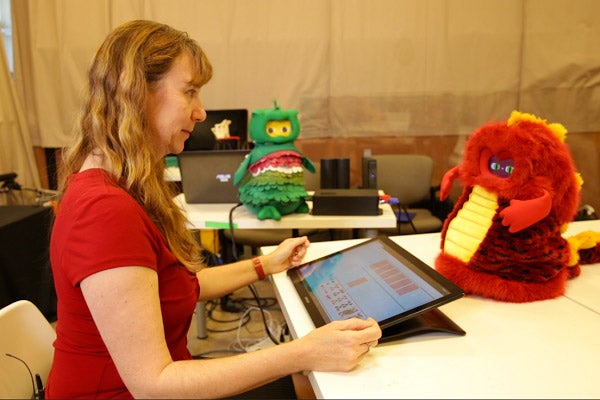 A new study -- a partnership between USC, Yale, the Massachusetts Institute of Technology and Stanford -- will send these robots into 30 homes of autistic children. Students will look at how the kids and their parents interact with the robots and examine the potential therapeutic effects. This is something that has never been analyzed, said Mataric.

Another pilot is sending her "Maki" robots into the Children's Hospital in Los Angeles to work alongside child life specialists, health care professionals who help reduce a child's fear. In the future, the robot could be placed in hospitals where having the help of human professionals is not an option because there aren't the resources available, said Mataric.

One application for Maki will be to help children deal with the trauma of intravenous injections. For example, the robot might distract a child by playing a game, explain exactly what is happening in the process or offer a reminder that the procedure will help the patient feel better. 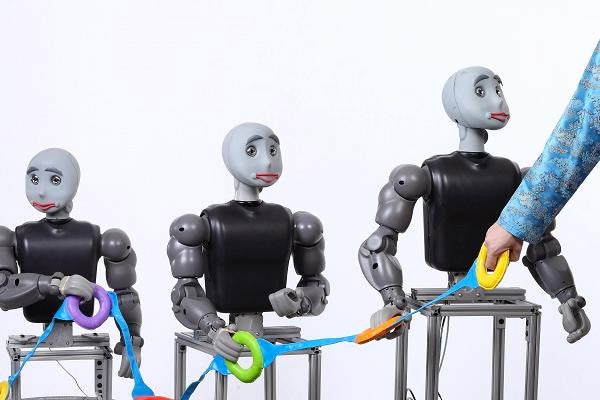 Maja Mataric, a University of Southern California computer scientist is project leader for Bandit, a robot that is designed to engage with children with autism.
Image credit: John B. Carnett | Getty Images

A number of companies are working to commercialize socially assistive robots, and it may not be long before the presence of robots in hospitals, schools and homes is common.

One company that is already selling robots to help kids with autism is RoboKind. Its "Milo" robot was developed in partnership with the Callier Center at the University of Texas at Dallas and costs $5,000. The company is focused on the education market and is already in 100 schools, said CEO Fred Margolin. 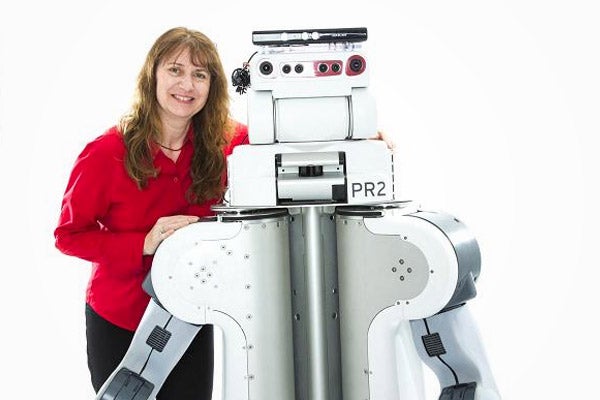 Maja Mataric has been working on socially assistive robots for more than a decade.
Image credit: USC

Mataric has started her own company to commercialize USC's bots and believes that, as with other commercial products like iRobot's Roomba vacuum, the price will drop as the industry develops. She estimates that there are hundreds of thousands of potential customers, and that manufacturing at scale could bring the cost as low as $500.

"The only way to reach real people in the real world is to make these products affordable," she said.

Do you think you dance well? Boston Dynamics robots beat you with their choreography