Imagine not having to say no to a drink anymore because you have to drive home.

That would be great for liquor sales, which have been hit hard by drunk-driving laws in countries like China and Scotland, according to a research note by Morgan Stanley's Adam Jonas and his team.

Drinking and driving should, of course, always be mutually exclusive, but the rise of car-sharing services and the development of driverless cars could shake things up.

Uber, for one, claimed that it has prevented about 1,800 drunk-driving crashes since its launch in California in July 2012, according to a blog post last January. But the evidence is mixed: A study by researchers at the University of Southern California and Oxford University found no effect from Uber on crash rates.

Regardless, the driverless-car and alcohol industries could benefit each other significantly.

"Shared and autonomous vehicle technology help address the mutual exclusivity of drinking and driving in a way that can significantly enhance the growth rate of the alcohol market and on-trade sales at restaurants. The total addressable market (TAM) of the global alcohol market is ~$1.5tn today (1.14tn drinks x $1.33/drink). As our base case, we believe greater prevalence of shared mobility (i.e. ride-sharing) in the next 10 years can add 80 bps to the annual growth rate of the alcohol market (currently ~2.2%). This assumes that the joint population of drivers and those who drink consume 1 extra alcoholic beverage per week on average. In reality, this is highly dependent on the timing and telemetry of shared models. Would be drivers who reside in cities where shared mobility is well penetrated are likely to consume more than 1 additional drink per week, in our view. Beyond 2025, we believe autonomous technology can unlock an even greater TAM opportunity."

To make their case, the analysts calculated current global alcohol consumption and its monetary value, and compared that with estimated figures under the impact of car-sharing and driverless cars. They found that the booze market could get an extra $98 billion: 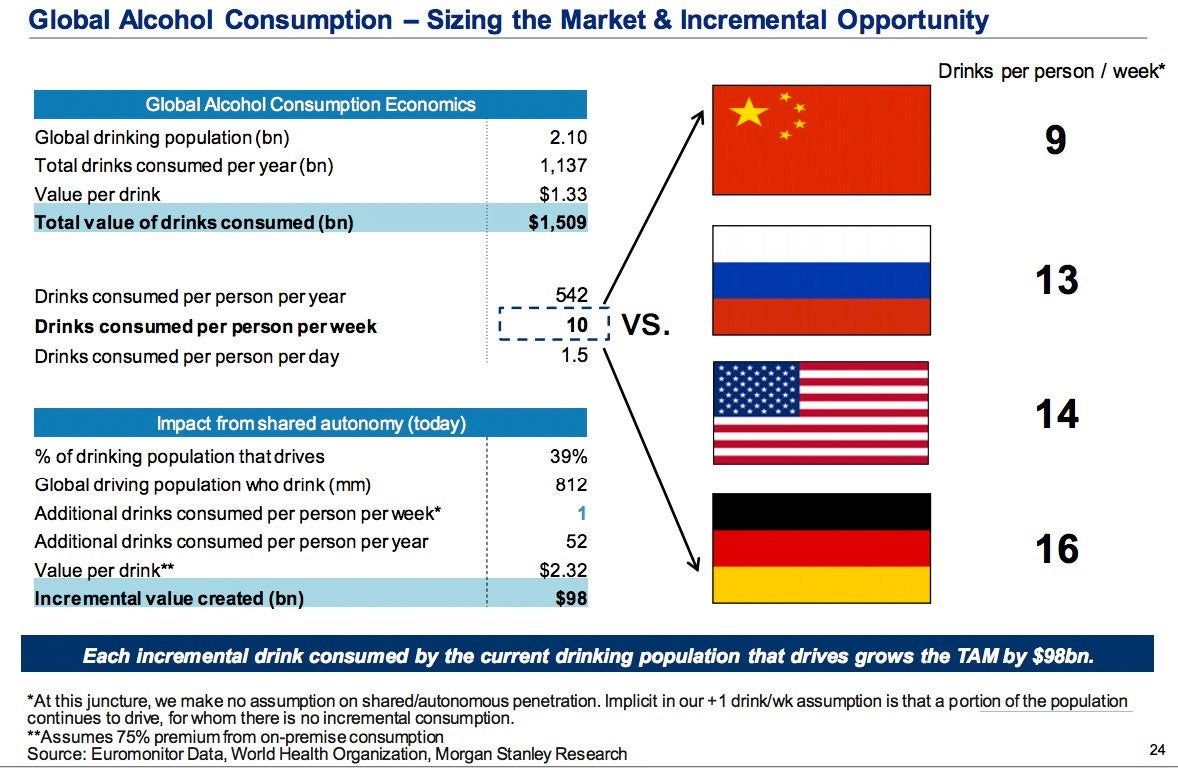 Brands that sell premium beer and liquor will benefit the most from these incremental drinks, according to the note, citing examples such as Corona's parent company, Constellation Brands, British whiskey distiller Diageo and Chinese state-owned company Kweichow Moutai.

We already saw how Americans are increasingly trading up to more expensive alcohol, a trend that Constellation CEO Rob Sands believes will continue.

What's the Scariest Thing About Driverless Cars? Hint: It's Not the Price.