Planning to Startup in Kerala? Here's Everything You Need to Know About Kerala Startup Mission!

Jayashankar Prasad, CEO Kerala Startup Mission, on everything about the state's initiatives
Next Article Add to Queue

What are the key initiatives taken by the government in Kerala to motivate startups?

The state government have implemented the Technology Start up Policy 2014 through its Nodal agency Kerala Start up Mission. The start up policy covers every pain points of the startups starting from capacity development, Infrastructure Development, Funding and Industry Association.

To create awareness for being an entrepreneur Kerala Start up Mission initiated its activities which touches every youngster from academia to an entrepreneur. KSUM supporting Technology Startups we identified that the technical knowledge of the youngsters need to be developed systematically which progressively changes the outlook of youngsters to create innovative projects/startups. Innovation being the thrust area for every successful startup, the need for empowering the technical capability of a youngster has become inevitable.

Identifying the same, the  Startup Mission has connected the ecosystem in 3 levels which starts from Schools – Colleges and Startups themselves.

What are the key qualities that you’d check before on boarding startups?

Idea validation, market viability, Innovation on the idea, whetehr the product solves any problem in the society, will the idea create traction, whether the idea is technically sound, whether the founder have sound technical knowhow.

According to Prasad, the sectors that  really stand out in the state information technology , electronics, biotech, tourism , food tech, healthcare.  As an incubator, infrastructure facilities are provided at three nodes of the state namely, Trivandrum, Ernakulum and Calicut.

More about the Kerala Startup Mission

Kerala StartUp Mission (KSUM) has been actively initiating various programmes for developing the student entrepreneurship in the state. Government of Kerala declared the start-up policy with an aim to accelerate the growth of student entrepreneurs. KSUM being the nodal agency for implementing the Startup policy have come up with various schemes for the effective implementation of the policy. The schemes cover a broad area from schools, colleges and to young entrepreneurs. 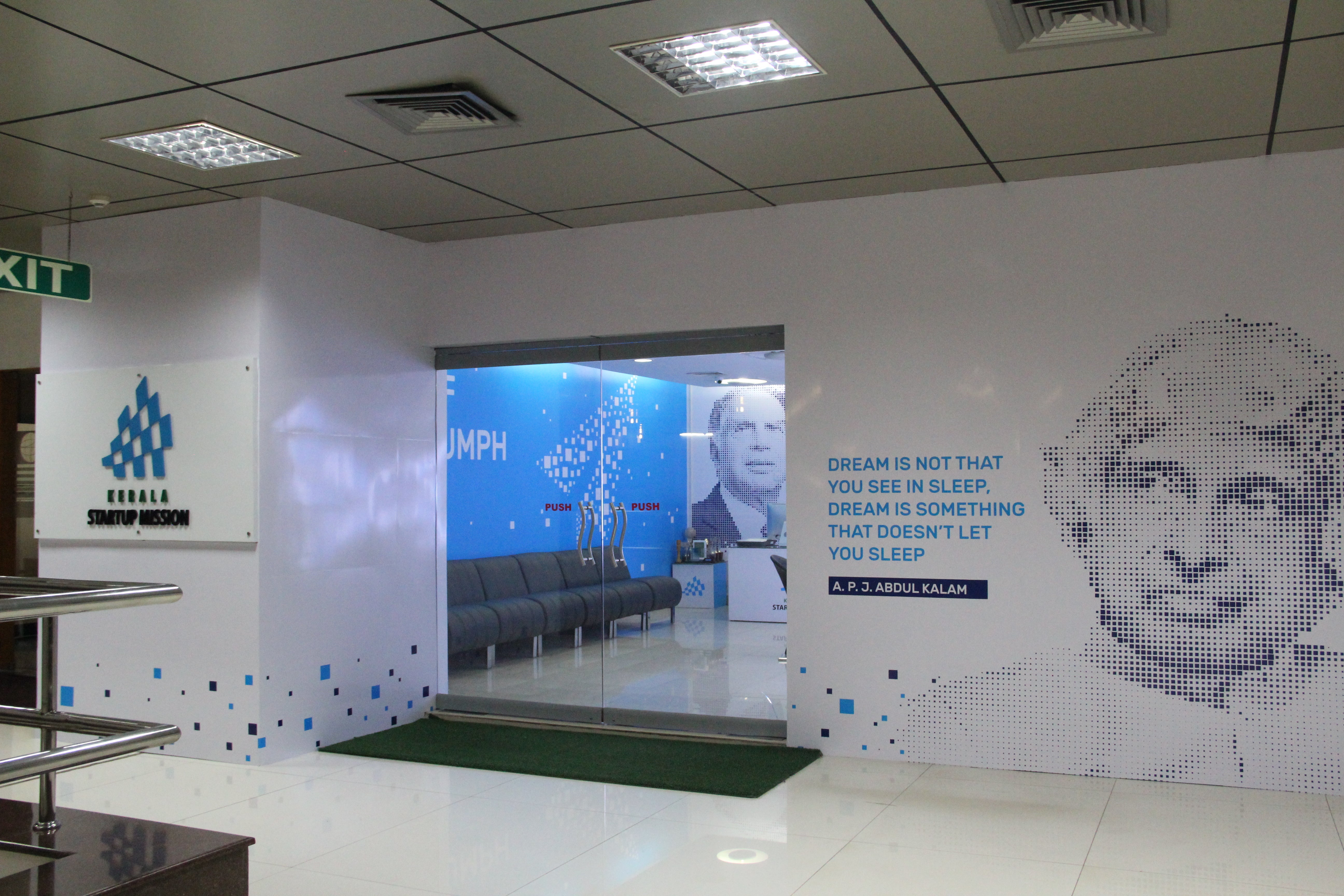 The programs are found to be effective as more youngsters come up with innovative ideas and the culture of entrepreneurship found to be flourished throughout the state. KSUM have been interacting with schools and colleges for the effective implementation of the schemes. KSM proposes to develop the innovative ideas of entrepreneurs into products. They will be given infrastructure facilities as well as mentorship to come out with market viable products. Kerala Startup Mission has initiated various programmes for the implementation of the Startup Policy.

KSUM was formerly the Technopark Technology Business Incubator (T-TBI), a society under the Travancore Cochin literary, Scientific and charitable Societies Registration Act XII of 1955 and started the incubation programme in the name of Technopark Business Incubation Centre (TBIC) in 2002. TBIC had been incubating IT & ITeS companies starting from 2 seaters. 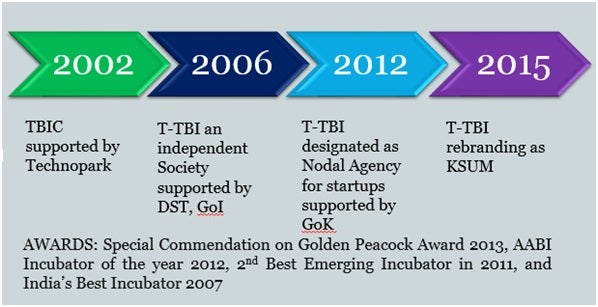 In 2012, Kerala Start Up Mission was taken up by Govt. of Kerala and entrusted as the agency for implementing the entrepreneurship development programmes in the state. KSUM is building the Kerala Technology Innovation Zone at KINFRA HiTech Park, Kochi, which is a single roof infrastructure for multiple sector incubator. Since then, KSUM has been promoting entrepreneurship development programmes right from schools (Raspberry Pi Programmes), colleges (Boot Camps), Startups (Pre-incubation/ Incubation/ Accelerator Progarmme, Startup Box Campaign, Leadership Academy, International Exchange Programme etc).

KSUM is also the implementing body for the Kerala Technology Startup Policy that supports startup ecosystem by means of 9 components such as Infrastructure, Incubators and Accelerators, Human Capital Development, Funding, State Support, Governance, Public Private Partnership, Scaling Existing and Establishing New Incubators and Startup-Bootup-Scale up model for moving fast from ideas to IPO.

The Start up Boot camps run by Kerala Start up Mission is acting as a nodal point for pooling up innovative ideas from colleges. The 113 boot camps have accommodated around 100000 engineering students across the state. The activities initiated in the boot camps enable the students to come up with innovative ideas. These innovative ideas are taken up to expert committee who will evaluate and will give mentorship for the same. The technology related issues as well as market analysis/viability will be assessed and proper guidance will be given by the expert committee. 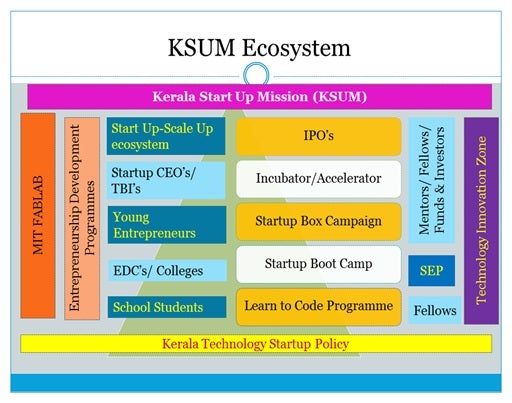 The model derived by KSUM will enable the students to get hands on experience on various technology based products. The fabrication labs will act as a catalyst to come up with prototypes.The idea to prototype can be made possible by the resources available with Kerala Startup Mission.

Entrepreneur members get access to exclusive offers, events and more.
Government and Startup

Potential of Government-tech Start-ups and Their Framework

Banks or VCs; Where Should Startups Seek Funds?

"We Are Taking Innovation To All Over Karnataka" – Priyank Kharge

Make In India Vs Startup India

Why Are All Tech Giants Suddenly Investing In Telangana?