Can Your Product Fit into a Gift Box? Here's a New Holiday Sales Idea.

Holiday markets around the country are getting bigger and bigger every year. Why? The gifts they sell are beautiful, and visitors are ready to buy.

As a micro-entrepreneur, you've probably decked the halls of your brick-and-mortar boutique with twinkling lights and other hallmarks of the holiday season. Your ecommerce site? Aglow with sparkling sales and discounts to woo in buyers for the big Christmas rush.

But, wait. There's an additional channel to consider that might lead to still more holiday cheer (as in profits, not figgy pudding): Say hello to the concept of the holiday market.

Holiday markets are those (often outdoor) events, from Thanksgiving til Christmas, where craftspeople, artists and food vendors rent booths and sell to the thousands of passersby strolling past, sipping hot cider and perusing the lovely artisanal gift possibilities holiday markets offer in one locale (much nicer than the local mall).

So, if your own product can fit into a gift box -- think hand-crafted soaps and fragrances, leather goods, t-shirts, yummy treats, artwork and the like -- sign up for one or more of the holiday markets taking off in dozens of U.S. cities.

Chicago's Christkindlmarket is one of them. As a branch of the German-American Chamber of Commerce, the market, in the Windy City's Daley Plaza, promotes products from German-speaking countries that range from teddy bears to beer steins.

"It's about gaining brand recognition, so people will be familiar with their name and seek them out," says market manager Kate Bleeker. "It's about building community awareness." Twenty years ago, Bleeker says, Chicago was the first Christkindlmarket. Today, these markets are all over the United States and Canada.

In New York, vendors Shirley and Rebecca Solomon have been selling at various holiday markets for about the same period of time. 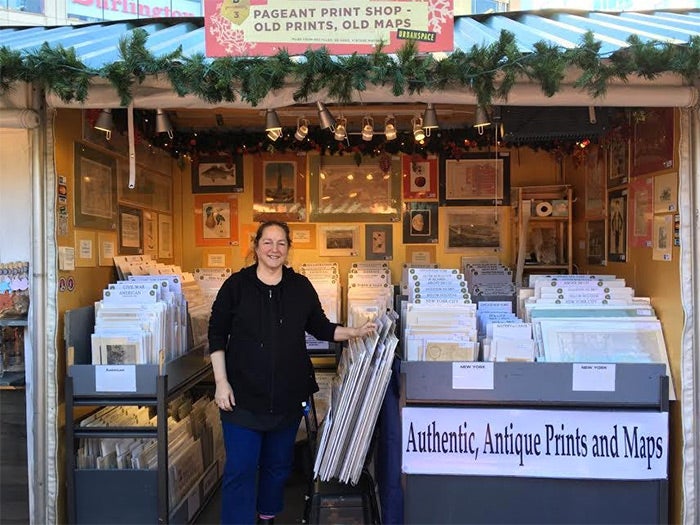 The sisters are co-owners of Pageant Print Shop, on New York's Lower East Side, a legacy business their father Sidney co-founded 70 years ago. Holiday-market veterans, the sisters have sold at multiple New York holiday markets, including those at Grand Central and Columbus Circle. In recent years, Pageant Print has been a fixture at the Union Square Market, managed by Urban Space NYC.

Normally, the sisters work out of their charming East Fourth Street store (glimpsed in films like Neil Simon's Chapter Two and Woody Allen's Hannah and Her Sisters), offering antique maps and prints dating back to the 1700s. The maps are particularly popular as Christmas gifts.

And the sisters couldn't be more positive about holiday markets' sales opportunities. In an interview, Rebecca Solomon offered tips on how to proceed for entrepreneurs with cold feet (literally; these fairs are usually outdoors).

Why do a holiday market at all? "A bricks-and-mortar store only brings in so many people, but holiday markets bring in thousands of people a day who are in a buying mood," Solomon said. "They're there because they're ready to buy. So, you just have to make sure you have what they want."

Where do you get your maps? "That's a secret."

Have any of your sales items bombed? "I don't think we've ever had anything that bombed. If it's a good year, we can sell anything. [She declines to give revenue figures.] But we can have 2,500 sales over a month. We have done other markets and not done them again because they just didn't work for us: the wrong clientele, the wrong customers for us." [The Union Square market runs November 17 to Christmas Eve; some markets are shorter, or offer vendors different schedules.]

What have you learned over the years? "Our New York section really got expanded. People love anything 'New York.' One of the things you need to know is who your customers are -- because they can be very different at different holiday markets. So, for instance, at the Bryant Park holiday market, they get a lot more tourists, whereas at Union Square we get tourists and locals. You have to know who's coming to the market, so you can cater to that. Some people sell children's clothes because people are always buying for kids. If you're doing jewelry, you want to make sure that your stuff is very different from that of any other jeweler."

What kinds of prices do you charge? "We'll have a couple of things over $500 and we can usually sell them but I think our average price point is between $20 and $100. And it's important to know that. I think, for people coming in, selling the more crafty stuff, they have to have enough; they should be ready for the volume. [And price points should vary.] There are people who sell original artwork, but then they also sell greeting cards. Think about 'stocking stuffers.'"

Other advice? "Be ready for the last-minute rush. One of the things is, you try to look at how you're doing, but you'll do as much in the last two days as you do in the first two weeks. The last-minute rush really makes a huge difference. So, don't be discouraged if it's a slow start."

What do first-time holiday market sellers need to think about? "Make your booth look festive and bright. We put up holiday lights and green stuff. We think that if you decorate your booth for holiday happiness, it really affects everything. The one in [Washington, D.C.], people are in their booths for only a week. At that point, you're not committed to really investing in decorations. But we do."

Those are some long hours for the market. Do you hire help? "A lot of people use Craigslist and, depending on how you do, it some people pay by the hour and some on a commission. We just hire people we know."

Do you have concerns about others at the market offering the same products you do? "At Union Square, they're really good about not duplicating. They had another print vendor for a while, and it really made a difference. You can have different jewelry designers, though."

What can you say about weather? "Weather affects everything. Especially the closer you get to the holidays, a rainy day or snowy day can really knock things out. You usually can't make up those sales. [Moisture] really affects us, as does cold: If it's 10 degrees, customers don't want to stand there and look through a million things. Whereas at other booths, you can see everything they have at one glance. Also, people are not out when the weather is really bad."

How have you two coped with the weather? "We have heaters! Plus, we've learned how to dress. We've been at Union Square for over 20 years. We missed the first year [because of weather]. They asked Shirley if she wanted to do it, and she said, 'Are you crazy? Who wants to be outside?' And then her friend who did it said it was the best thing ever."