By Aparajita Mukherjee February 13, 2017
Opinions expressed by Entrepreneur contributors are their own.
You're reading Entrepreneur Middle East, an international franchise of Entrepreneur Media.

The Qatar Financial Centre (QFC) has come a long way since its inception in 2005, be it with the continuous development of its corporate strategy, the widening of its platform, or the permitted activities and regulations. In explaining the basic function of the QFC, Yousuf Mohamed Al-Jaida, CEO of Qatar Financial Centre Authority, says that QFC is “neither an offshore centre, nor a free trade zone, but an onshore platform,” noting how it enables international firms to operate in Qatar without restrictions on currency or trade, and under one of the most favorable tax environments in the world. But Al-Jaida is quick to clarify that QFC is not just a platform for enterprises outside of Qatar.

“A financial and business centre can’t just be created by attracting foreign companies. To be a true business centre, Qatar needs to nurture and support the growth of local companies as well. The QFC plays an important role in supporting this aspect of Qatar’s growth- more than 30% of our licensed companies are local; in our conversations with them, these local firms acknowledge the QFC’s robust legislation as an important facilitator in their success as they expand in Qatar and beyond.”

Since 2005, the QFC has licensed over 300 firms, with approximately QAR75 billion in assets, with those firms distributing over QAR1.5 billion in salaries per year. “Several of these institutions began by providing services in Qatar without immediately having a formal presence here. So an important benefit to the local economy is that QFC is a catalyst to on-shoring businesses,” explains Al-Jaida. “Recently, Qatar First Bank became the first Qatari QFC-licensed firm to be listed on the Qatar Exchange. This and several other local success stories add to the real impact that the QFC has on Qatar’s economy.”

Classifying the several kinds of companies within QFC, Al-Jaida mentions that several of these companies are specialist companies operating in knowledge-based industries, for example research services (Bloomberg & Thomson Reuters), valuation services (ValuStrat) and Management consulting (PWC, McKinsey). “Their presence in Qatar facilitates information sharing and capacity transfer to the local economy,” says Al- Jaida. While the size of a company that comes into Qatar through QFC is not the most important criteria, QFC’s main purpose, clarifies Al-Jaida, is to act as an ideal platform for international companies who want to expand their business activities to Qatar and the region. One of the huge benefits that QFC offers its licensed entities is having its own legal, regulatory, tax and business infrastructure, which allows 100% foreign ownership, unlimited repatriation of profits, no restriction on the currency used for trading and the competitive corporate flat tax rate of 10% on locally-sourced profits, which is adjusted for tax purposes and determined on the basis of Generally Accepted Accounting Principles (IFRS, UK and US GGAP).

Commenting on the transition from a zero-tax regime to the levy of tax by QFC on its licensed firms since the QFC Law No. 7 of 2005 provided for an initial tax holiday of three years for QFC entities (extended, later, to five years), Al-Jaida says, “The QFC approach in respect of tax, which is unique in the region, is not to provide companies with permanent tax holidays or to market itself as a free zone or a tax haven. Instead, it took the option of setting itself up as a location where financial services providers and other businesses can operate freely onshore (in Qatar), regionally and internationally, while being subject to a transparent, fair and competitive tax regime.”

Al-Jaida clarifies that the QFC tax regulations (which became effective on January 1, 2010) provide for a territorial tax system whereby only locally sourced income is taxable. “In other words, income that is derived from activities performed outside Qatar is not taxable.” Clarifying that the tax imposition has had its advantages as opposed to a permanent tax holiday, Al-Jaida mentions that the flat tax has made it possible for any foreign company’s branch operation at QFC to offset its corporate tax against the tax liability of the company’s head office, often even in the absence of a tax treaty. “This is because the tax law of most developed countries provide for unilateral tax credit relief. This possibility would not be available if, instead of corporate tax, QFC entities were subject to service fees or other levies,” explains Al-Jaida.

Another important advantage, according to Al-Jaida, of being subject to tax in the QFC is the access to the benefits and protections provided by the wide tax treaty network of the State of Qatar. He informs that Qatar has more than 60 effective tax treaties, and being subject to tax is often a requirement to get access to these treaties, particularly now in this post-Base Erosion and Profit Shifting era (or BEPS, a project initiated by the Organization of Economic Development and Cooperation) to tackle tax avoidance. Tax treaty benefits include mainly lower taxation thresholds and withholding tax rates, availability of foreign tax credit, access to the Mutual Agreement Procedure (a dispute resolution mechanism) and protection against discrimination.

Al-Jaida adds that on the back of the Gulf Cooperation Council’s decision to introduce Value Added Tax (VAT), by its very nature, being an international treaty, the agreement introducing VAT will apply to all companies in Qatar (including QFC entities) regardless of any relief or exceptions provided for, in domestic laws. “However,” he clarifies, “the implementation of the tax still requires the enactment of a domestic VAT law, which will stipulate in full the details. We know that the Ministry of Finance is working on this, and is putting in place appropriate resources to make the implementation of the tax a success.” 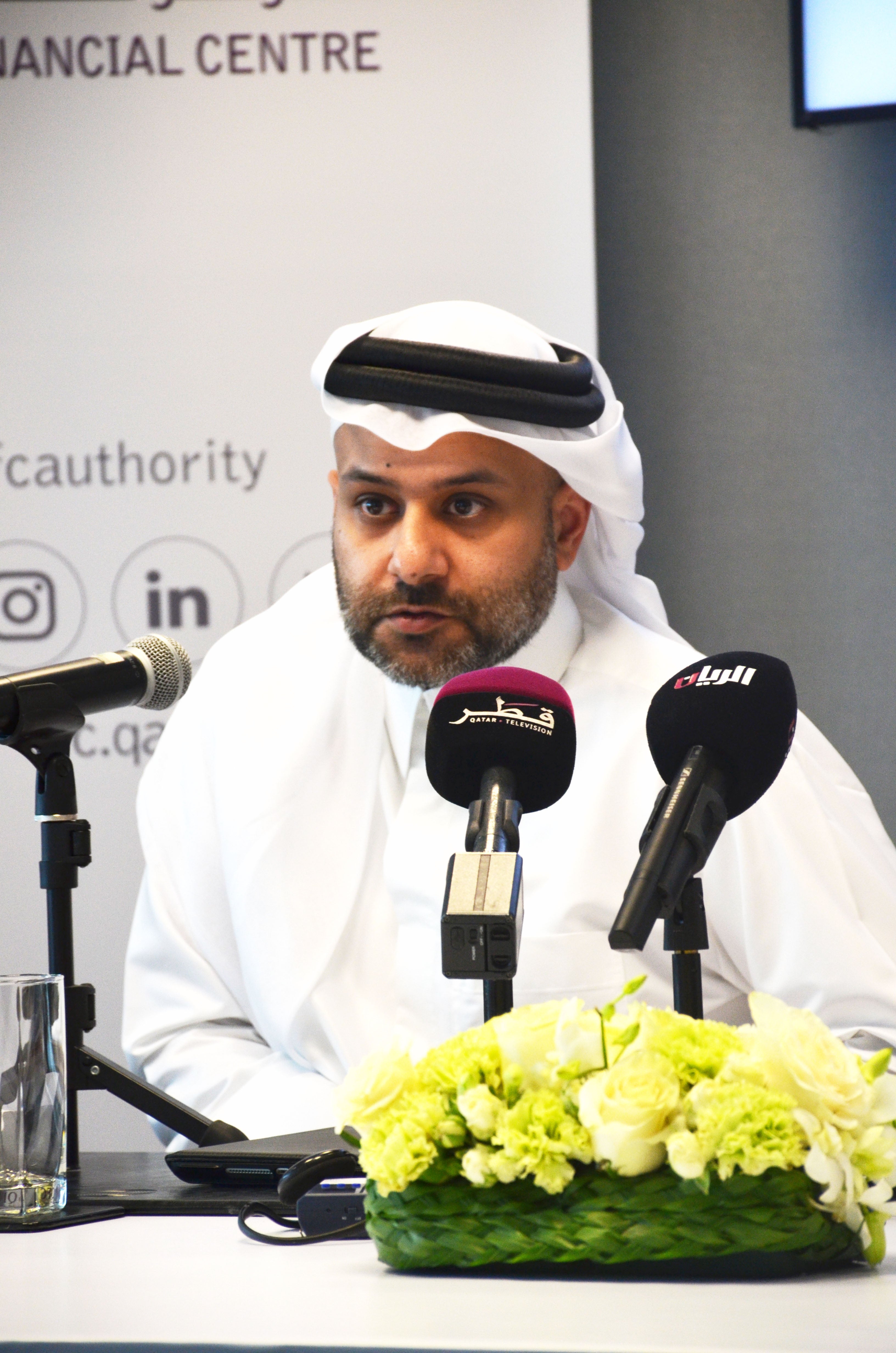 QFC’s objective is to promote Qatar both regionally and globally. Qatar’s Gross Domestic Product continues to grow favorably in comparison to other oil-exporting countries in the Middle East, and Qatar has maintained its credit rating, one of the highest in the world. The strength and stability of Qatar’s market makes it an ideal candidate for businesses looking to expand to Qatar and beyond.”

QFC started with bringing in financial services companies into the country and later expanded to include management consultancy, recruitment, sports and entertainment, engineering, and claims services. Speaking about the advantages that this widening of the types of companies has brought about, Al-Jaida lists out three specific economic impacts: direct impact (based on direct business benefits from the entities and companies that QFC has brought into the country); indirect impacts (from entities and companies by and induced impacts (from direct and indirect employee spending benefits).

“However,” Al-Jaida clarifies, “QFC’s contribution goes beyond the economic contribution; the foreign companies we attract bring along an additional human element, high caliber staff, knowledge and knowhow that contributes to the growth and diversification of the local economy and is transferred to the local population, creating a deep talent pool that, in turn, benefits the economy as a whole.” On QFC’s role as a catalyst to boosting the entrepreneurial culture among the Qatari youth, Al-Jaida opines that the QFC is instrumental in opening up the private sector in Qatar and exhibiting the ‘best in breed’ of a huge variety of businesses.

Citing examples, Al-Jaida mentions, “We have, for example, attracted some of the biggest management consultancies in the world and various professional service firms that are quite new to the region. A by-product of having these firms on the peninsula is the knowledge and expertise they bring, all of which will circulate in the economy and undoubtedly inspire both the local youth and industry veterans to start their own ventures and widen their aspirations to go beyond merely seeking jobs to creating them.” In addition, towards promoting the entrepreneurial mindset, QFC has taken a more structural approach by investing in a partnership with the Qatar Finance and Business Academy in a number of educational schemes aimed at preparing and equipping the local human capital and developing the financial services industry as a key source of sustainable growth for its citizens and residents alike. 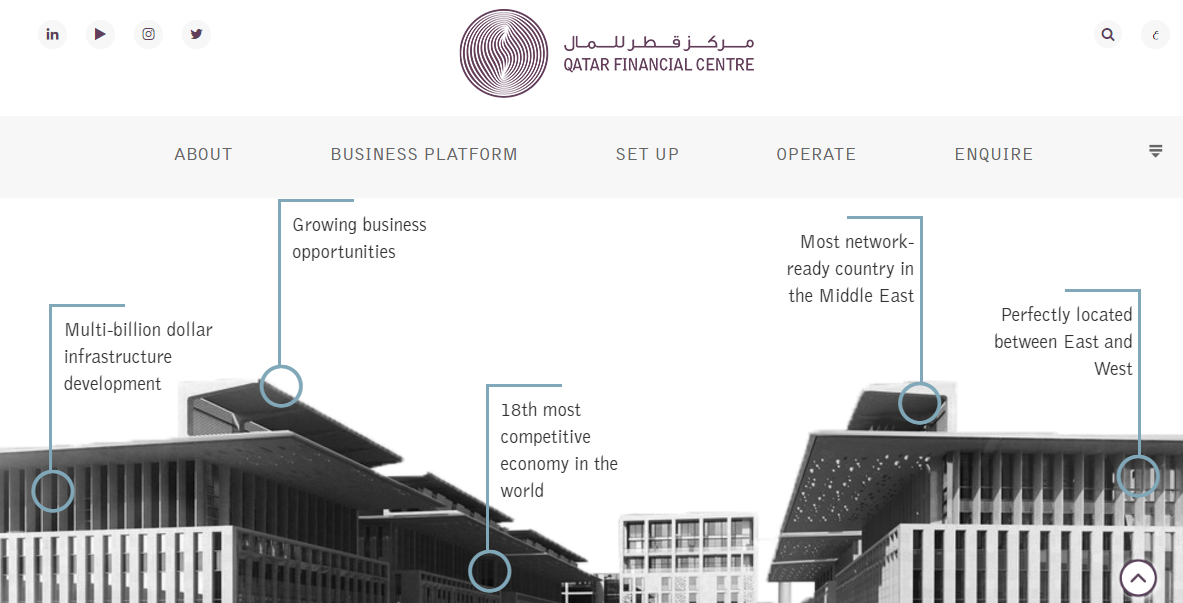 Training programs such as “Kawader” and the “Future CEO Programme” developed jointly with QFBA have been designed to reinforce the development of the human capital and recognize the highly skilled human capital as a foundation for entrepreneurship, private sector diversification and ultimately the prosperity and sustainability of the Qatari economy. The current hydrocarbon pricing in the international market, in the opinion of Al-Jaida, has presented an opportunity for substantial growth in market sectors such as financial and management consultancies that are not directly affected by the fluctuations in the price of energy. “These sectors are naturally thriving in the region as it moves and matures to more diverse, sustainable, knowledge-based economies. The QFC has recently shifted its strategy to pay more focus on attracting firms that will serve its purpose of helping in diversifying the economy in line with the Qatar National Vision 2030.”

In addition to domestic initiatives, QFC, in 2016 also launched its Asia Roadshow which included events in the UAE, India and Japan. According to Al-Jaida, “In Japan and India, we were provided with an opportunity to sit down with prominent Japanese and Indian investors to discuss investment prospects in the country, and get them acquainted with the support provided by the QFC to the firms to expand globally, and eventually lead to promote the Japanese and Indian trade and investment presence in Qatar.” He adds that as part of this year’s roadshows, QFC is looking at Germany, UK, China, Singapore, USA and UAE.

Reflecting on the decadelong journey that the QFC has made since its establishment in 2005, Al-Jaida says, “The most important of learning throughout our journey, in my opinion, is the realization that today’s business environment dictates that our laws, regulations, policies and strategies are, in fact, responsive and require continuous commitment to evolve and develop them further.” With a futuristic tone, he signs off, “Staying ahead of the curve is a major responsibility, which entails a lot of dedication, hard work, unconditional investment and belief in our most important asset, human capital, as keys to success.”

Related: A New Generation Of Islamic Finance Experts Is Required In The Middle East 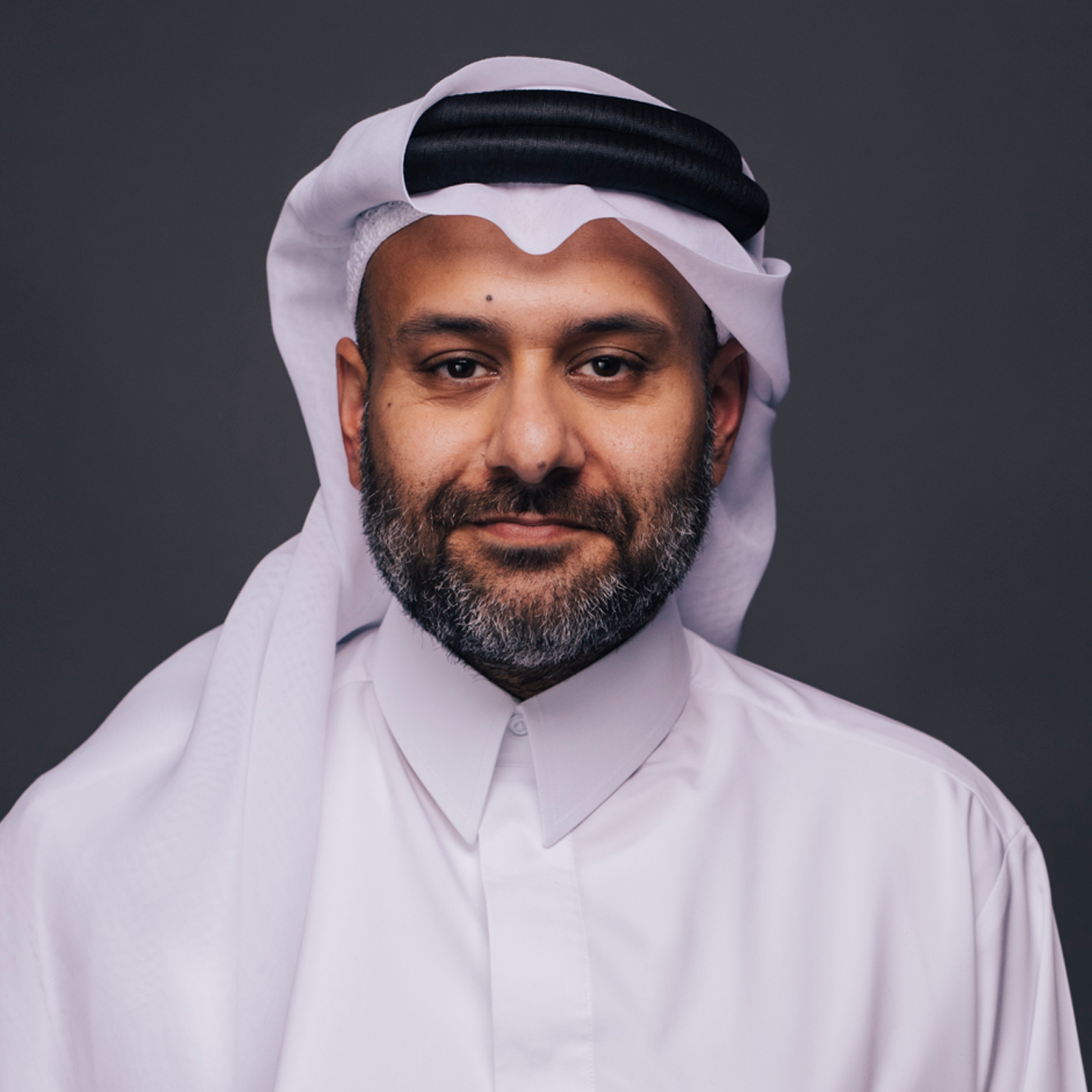 2. Always have a detailed plan

“An in-depth plan that fully details how you will tackle the challenges ahead is an absolute necessity. The plan should define the opportunities for growth, the mission, the target, measurable goals and deadline for each milestone along the way.” 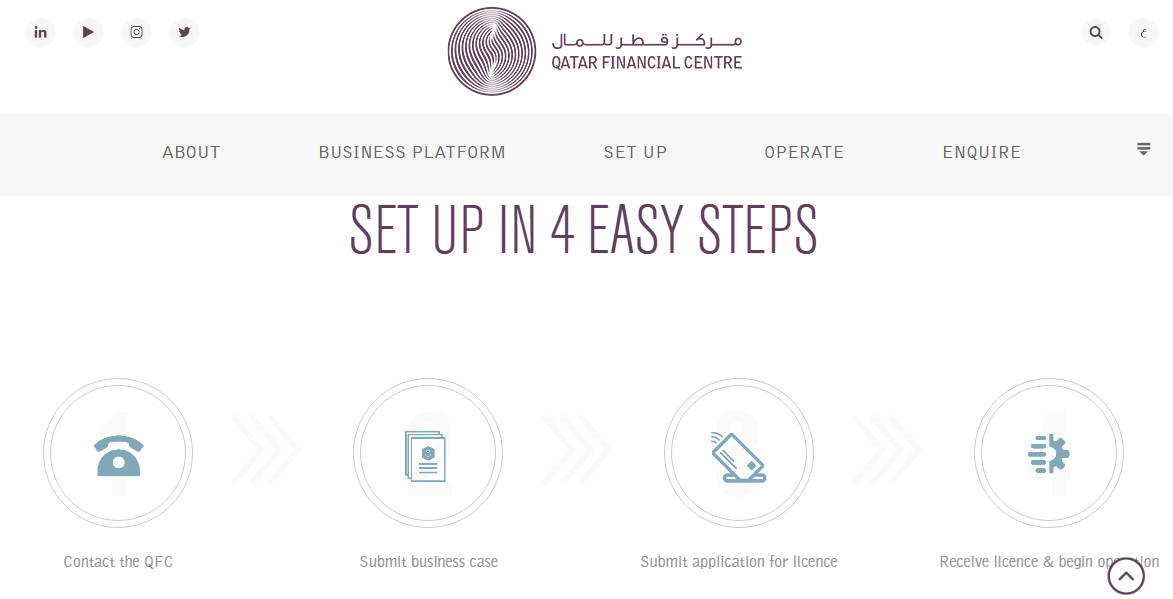 3. Surround yourself with the right people

“Knowing people who can be your mentor or offer strategic advice is important but having the right people with you on the ground is equally important. Build your staff with smart, talented, and driven employees who share your vision.”

4. Have confidence in your business idea

“There will always be people who will criticize you and your business model. Ignore the doubters. If you believe that you have found a good product or service, then go for it. Yes, there may be a few rejections but use these to improve your business instead of letting it drag you down.”

“Running a successful business requires an inordinate amount of time and energy. It is paramount to find a healthy work-life balance, even though it can be a challenge to do so.”