"It’s an exciting time to be an entrepreneur in this part of the world,” says Aysha Al Mudahka, CEO of Qatar Business Incubation Center (QBIC), and before you dismiss this notion of hers as an oft-repeated trope, know that she has good reasons to back it up as well. “We see that many populations around the world are aging, while the Arabic-speaking world is, I think, about 50% under the age of 25, and we have a large, educated, connected middle class. That’s a factor in remaining competitive; we have an advantage there, we’re young in this part of the world. None of us knows what AlphaGo and self-driving cars are going to mean for the labor markets in 10 years, but we do know that the Arab world is predicted to witness 7% above the global average for internet penetration by 2018, and that’s an advantage.”

With this being the case, it should therefore come as no surprise as to why entrepreneurship has been a priority for the Qatar government for quite some time now. After all, according to Al Mudahka, for over 20 years now, the state has been striving to develop a knowledge-based economy, moving away from being a rentier state and developing a solid, booming private sector. “The country has built the necessary infrastructure, fostered education, technology, research and innovation, as well as many other aspects that support this ambition,” she says. “We’re already witnessing change and development in various areas, especially when it comes to education and personal development.”

Explaining QBIC’s role in the overall rubric of the government’s plans, Al Mudahka says, “QBIC fits within the entrepreneurship, startup development and incubation aspect of the SME vision that Qatar Development Bank (QDB) is executing, as well as Nama (previously known as the Social Development Center)- they are our founders. At QBIC, we welcome startups with potential to grow, and equip them with the tools and facilities they need to reach new levels and scale up. Our mission is to create the next QAR100 million Qatari companies, and to make sure that they survive the initial stages of joining the private sector and eventually grow into an SME.”

Realizing this mission will require changes in the country’s landscape as well, and Al Mudhahka notes that there are a number of reforms taking place in this regard- for instance, the Ministry of Economy and Commerce recently launched a new mobile application where one can register a company and manage most of the official documents needed.

Moreover, 30% of public tenders, going forward, will be dedicated exclusively to SMEs which, in Al-Mudahka’s opinion, “is a very strategic approach, and will ensure that SMEs and startups can find good business opportunities and chances to grow. It’s really a perfect time for such policy to be in place, and I hope to see our entrepreneurs making use of such support, which is offered by QDB through a conference known as Moushtarayt, aimed at creating business opportunities for SMEs and startups.”

From QBIC’s standpoint, the organization teaches entrepreneurs a methodology that makes it easier for them to invest less money and give more time and commitment to work on a minimum viable product (MVP), try and test it in the market, generate revenue, and then out of this revenue, start scaling up slowly. “We use the lean methodology to educate startups,” explains Al Mudahka. “The methodology and the mindset should be there before we introduce money. We do not give them all the money they need at once; we start with QAR100,000 for three months and test what they do with it, what they do with activating their company, what they do with the customer validation, and creating a second MVP.”

During this stage, it can be assessed if the business can survive or not. If they succeed, the business will remain there for two years, and QBIC will have them accelerate during that time. “Therefore, by the second year, they are ready to exit the incubator. They’re always sheltered under QBIC’s umbrella, and we end up taking a lot of their risks for them. This is why we have a strict evaluation process and regular milestone meetings.” Al Mudahka reveals that till date, QBIC has incubated over 50 companies that range from a variety of different industries in the past two years. 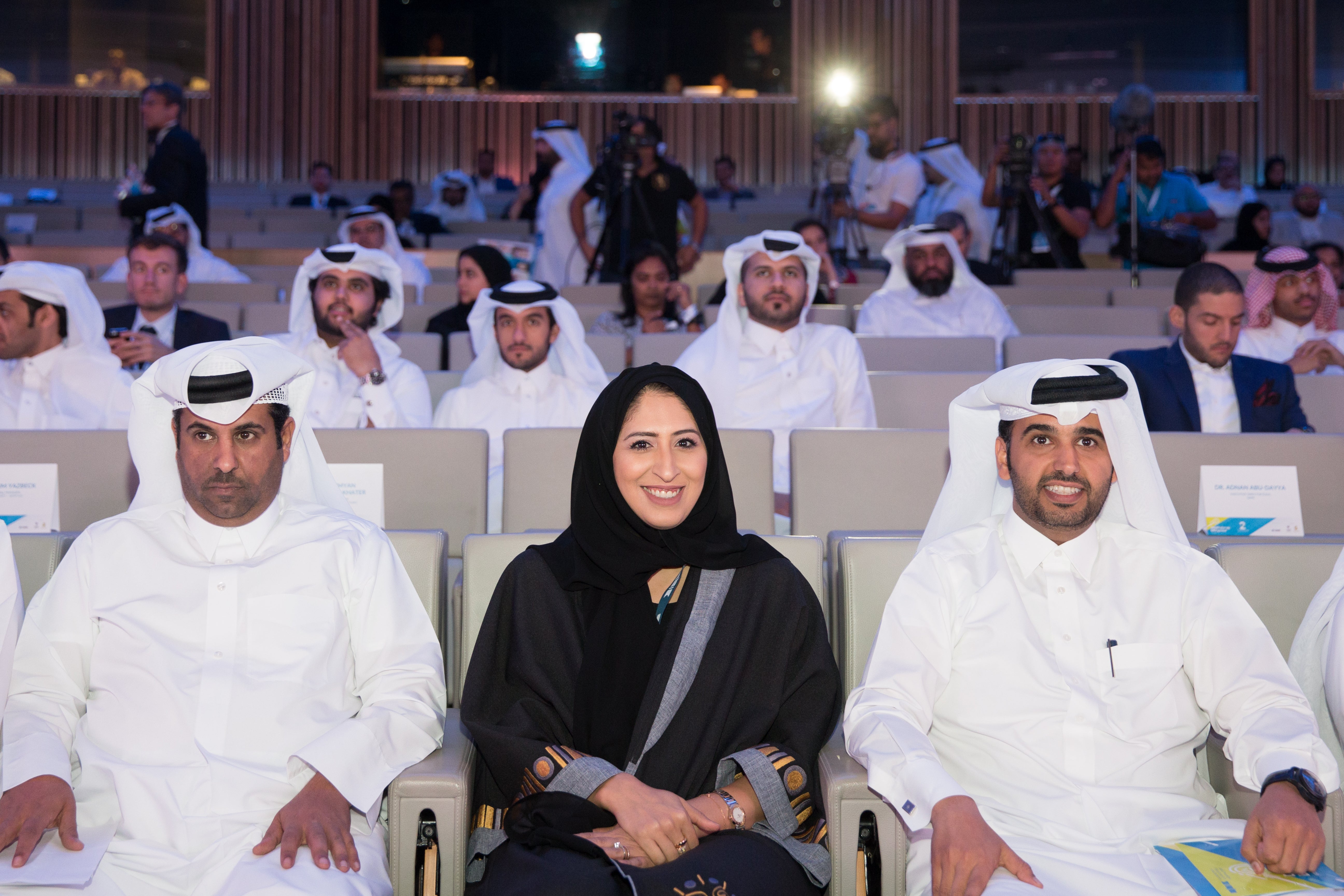 From a personal standpoint, Al Mudahka feels a strong connection with the QBIC community- she explains that it’s hard not to feel very connected with something one is passionate about, with a team that brings in interesting ideas for businesses and how to take the economy forward. “I’m not really sure if that’s something to do with age,” she says. “I feel sure I’m still going to feel that strong desire for engagement and interest in the future when I’m older. At the same time, of course, it is great to be able to stand as an example for what is possible. If I can do it, why can’t others? And indeed others are doing the same. There are a lot of young Arab entrepreneurs.”

As for her own career trajectory, Al Mudahka began her professional life at Qatar Financial Center, which was then working on a new project aimed at promoting Qatar globally, as the ultimate upcoming destination for business investments. “It was a great learning experience for me, and I had the chance to network and connect with business leaders and influencers.” From there, the next destination was to Wharton Business School of the University of Pennsylvania, in the US for an executive course that lasted for a month, followed by an internship in one of the largest insurance broker companies in New York at the peak of the financial crisis in 2008.

“It was a very challenging time for me to be involved in this sector, and from my experience, I decided that insurance was not the path for me.” But the stay in New York City exposed Al Mudahka to a number of startups –this included small boutiques, small projects in the field of arts, culture, social media, e-solutions, food and beverage– which inspired her to get more involved in this realm, and she ended up joining a program at Carnegie Mellon University in Qatar (CMUQ), related to corporate innovation and entrepreneurship.

“It is at that stage that I realized my true calling- to focus on women’s development in the workforce, alongside innovation and entrepreneurship. From that point, I became more involved with entrepreneurship. It has been eight years now that I have been working in this field, and being part of its development and really laying the foundations for a strong private sector, has made my career so much more worthwhile.” 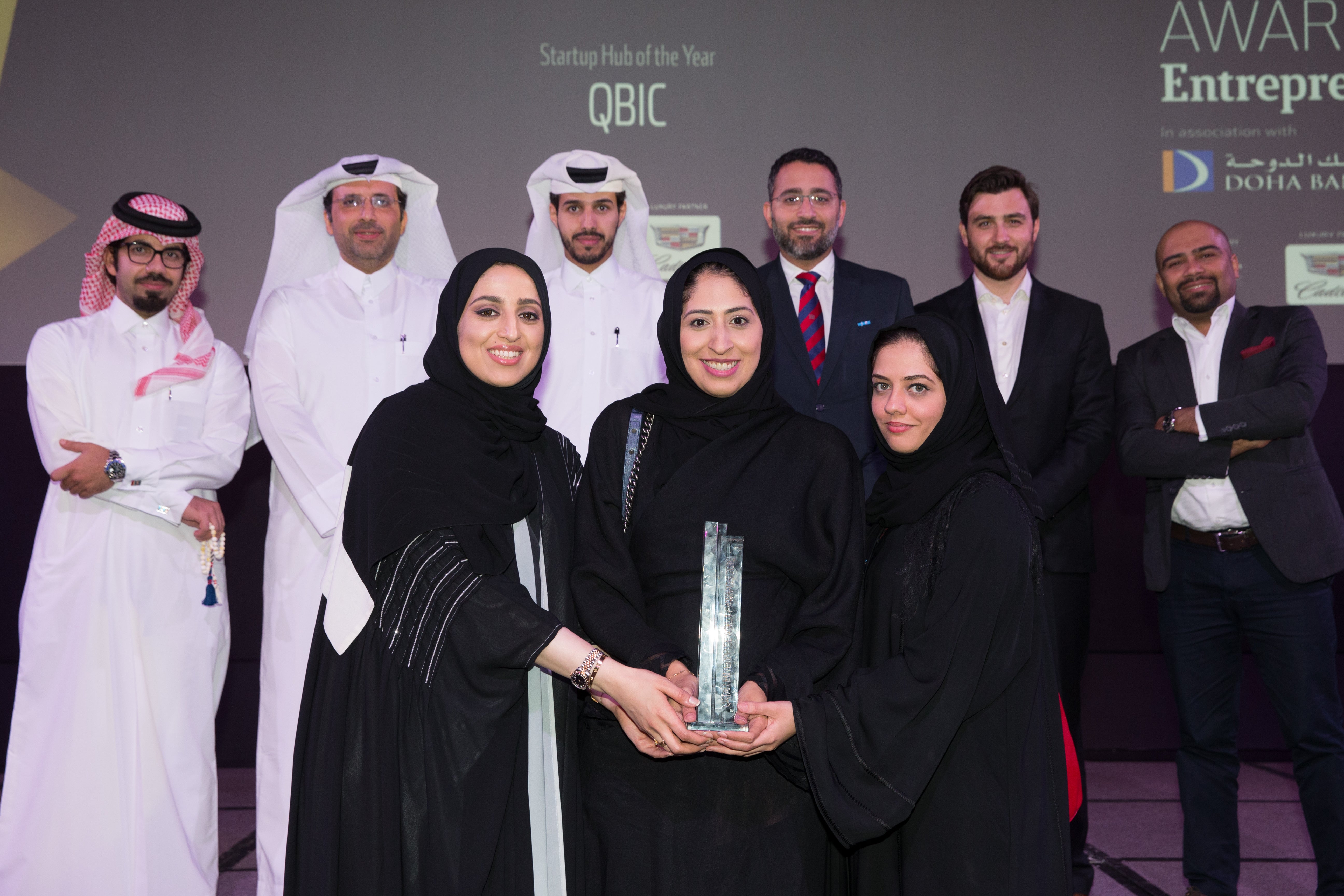 Given her current position and her career trajectory, it should come as no surprise that Al Mudahka is a role model for many women, and she doesn’t hesitate from speaking up for her peers as well. She sheds light on a white paper produced by Education For Employment in collaboration with Bayt.com and YouGov entitled, First Jobs for Young Women in the Middle East and North Africa, which says that if women’s participation in labor markets in the MENA equaled that of men’s, the regional GDP could rise by 47% over the next decade, and the MENA region alone could realize US$600 billion annually in economic impact (US$2.7 trillion by 2025).

“This shows that there is actually more of an opportunity for women to start their own business than to join the workforce, because the latter requires 100% commitment,” Al Mudahka notes. “Unlike a full-time office job, entrepreneurship grants women the opportunity to work from home, or from a place of comfort.” She adds that if we want a smarter economy, “not merely an economy trying to play catch-up with America regarding working women while America plays catch-up with Sweden, then the economy has to reflect the way we do things here. It has to be a transformation taking us towards our own ideal society, not someone else’s. The economy is a function of human interaction and transaction. It is not separate from culture, history, religious practice, society’s expectations, people’s behavior. All of that means that women in the Arabic world can and should work if they want to.”

It’s clear that Al Mudahka is thus a firm champion of entrepreneurship in Qatar, but given that we live in a culture where failure is still considered taboo, I ask her what she recommends for people wrestling with this kind of self-doubt. “Dealing with failures in public is not something that is favorable,” she agrees. “But we are very blessed to have families that always protect us -maybe a little bit too much- in order for us to take risks, which is both a blessing and a curse. As far as entrepreneurship is concerned, in order to achieve success, risks need to be taken and challenges overcome, and sometimes, that means you need to fail and try again.”

And that’s where institutions like QBIC come into play- Al Mudahka says she and her team are there to help people succeed, and that includes helping people who may find it difficult to rise again after a setback. “Failure is part of anyone’s lifecycle; it is one step to move forward and to become even more successful,” she says. “It is just one of the lessons that you have to go through to pick up the next opportunity, and move forward. If an entrepreneur is passionate enough, then failure will never be the end of your journey.”

• Works with two groups of entrepreneurs - those who have an idea and would like to turn into a business; and those with an existing small-scale startup looking for support to accelerate and grow.

• Provides them with free office spaces, mentoring, coaching and a chance to enroll in one of their flagship programs: LeanStartup (LSP) or the LeanScaleup (LSUP) Program, both which are based on the “lean” methodology, initially founded by Eric Ries. Also on offer are smart financing, legal support, coaching/mentoring and an equity share.

• Both LSP and LSUP allow entrepreneurs to partake without having a business plan, or specific degrees required to start a business. It takes the entrepreneur’s idea, and quickly transforms it into a tangible product or service –a Minimum Viable Product- while being as cost-efficient as it can, to test it in the market to see if the product is needed and wanted by the target customers.

• Offers entrepreneurs a seed fund of up to QAR300,000, which is then turned into equity shares. If a company requires additional funds then we refer them to our founder, QDB, as they have specially decided support systems and services for entrepreneurs.

QBIC has partnered with Qatar Tourism Authority (QTA) to set up a specialized incubator called QBIC Tourism that will enable entrepreneurs to develop products and services to enhance the Qatar tourism experience, by providing them with unique business development tools and access to insight and guidance from QTA decision-makers. “We have incubated seven companies so far, and have received hundreds of applications for aspiring entrepreneurs,” Al Mudahka says. “We have recently partnered with Ooredoo Qatar, focusing on digital solutions,” she adds.

“Together, we set up a specialized incubator called Digital and Beyond, which focuses on startups with digital solutions in a variety of sectors including: healthcare, sports, public services or finance and have incubated five startups, with many more ideas and applicants in the pipeline. We only launched this project a few months ago. It has already gained tremendous popularity amongst aspiring entrepreneurs.”

The Changing Face Of Business In The Middle East

Driven By Growth: Saudi Arabia Sees A Rise In Support For Startups And Entrepreneurs

Arabnet Beirut 2019: Highlights From The Tenth Anniversary Of The Landmark Event