Student developers, Microsoft is looking for the next big innovation from the student community, and here’s your chance to show off your best software solution. Microsoft Gulf, in partnership with Emaar Properties, is hosting the UAE edition of the Microsoft Imagine Cup 2017, a large-scale student competition offering young developers a chance to “mold the world of tomorrow” using their creativity and tech skills. Having debuted in 2003, the competition holds the status of being the largest and one of the oldest technology challenges, and kicks off its regional round in April 2017. Like the Microsoft YouthSpark initiative (of which Imagine Cup is a part of), the challenge is based on the premise that many of today’s successful tech platforms began as student projects, and is designed to “create an avenue for young entrepreneurs and innovators, in bringing their ideas to market.”

Imagine Cup selects most promising ideas/teams in over 100 countries by conducting local and online editions of the contest. These selected teams will then embark on an all-expenses-paid trip to the World Finals to compete with global student teams for a US$100,000 grand cash prize. Further, this year, the contest has decided to not bind itself by categories and invites “technology solutions of every type, from every field” that run on Azure cloud, and “demonstrate the potential for digital transformation.” The cash prize for this year’s regional round will be $15,000 for first, $10,000 for second, and $7,000 for third place winners. 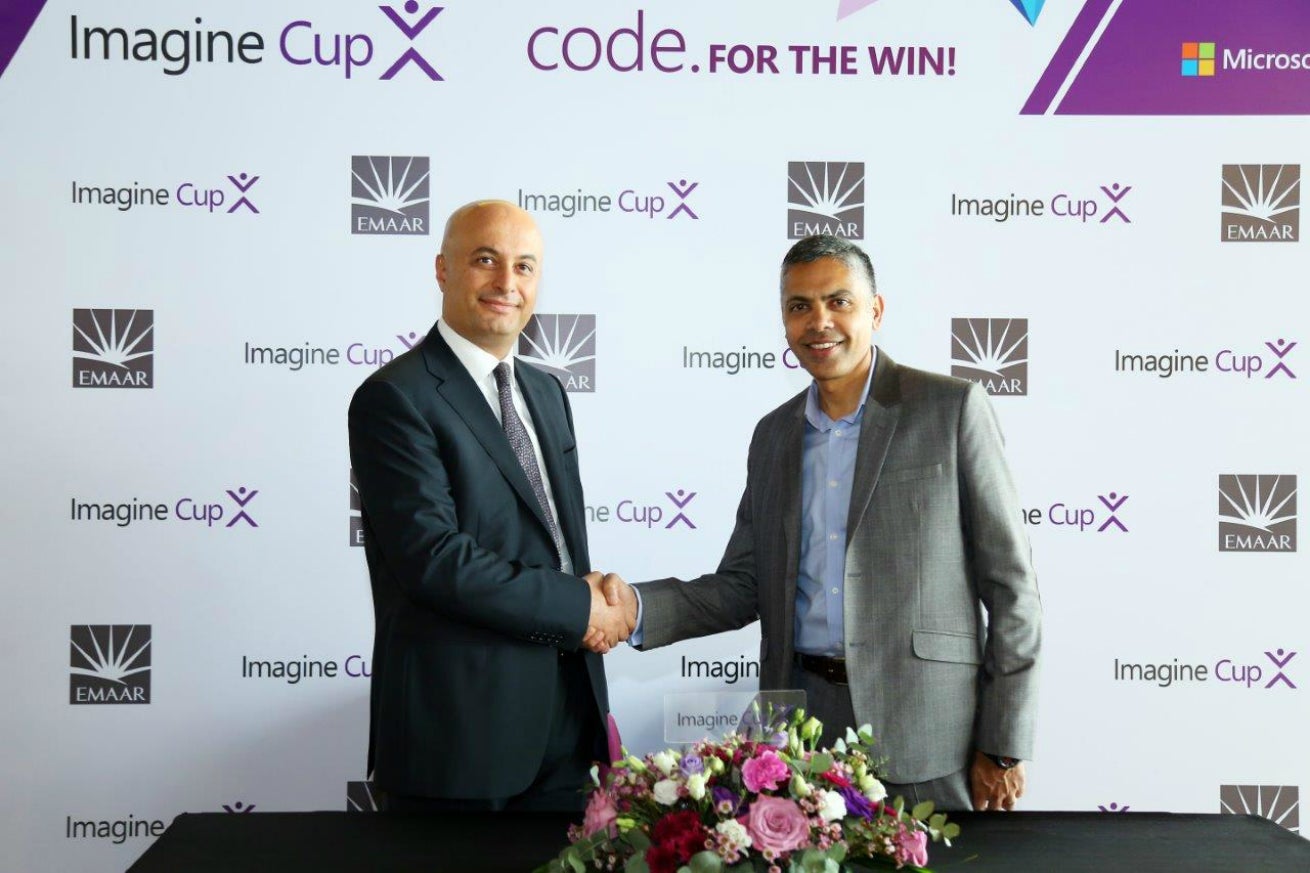 Speaking about the challenge, Samer Abu Ltaif, Regional General Manager, Microsoft Gulf says that Microsoft is “very proud of the change that we're seeing in the UAE,” given “the number of accelerators heading here, and the number of venture capitalists that are starting to show interest,” and he sees the Imagine Cup as “a golden opportunity” in the current climate. With regard to the support from Emaar, Abu Ltaif says he considers the group to be a key player shaping the lives of people in multiple cities around the globe. “There is a lot of emphasis on digital transformation in the context of urbanization and building cities…[Like Emaar], we are equally hungry to learn together and share those values with them,” he adds. Emaar, on its part, also regards the tie-up to be logical, both in terms of matching of values and objectives around tech innovations. “We believe that we are building iconic experiences for people, but we are really building it for future generations,” says Veresh Sita, Chief Digital Officer, Emaar Properties. “We want to focus on youth, youth development and youth empowerment. Instead of us, in a vacuum, trying to figure out what future generations desire, we see no better way than to actually use the youth of today to help us design the cities of the future,” he explains.

Talking about the business sectors and segments that stand to be gain the most from the solutions emerging from the challenge, Abu Ltaif draws attention to the fact that the organizers have taken a conscious decision to not apply any criteria or categories year, and “want to leave it open for the students to unleash their creativity. We want to focus our energy on enabling them, and want to limit our engagement and even engagement of the mentors to helping them in things that are structural…giving them a direction that is about enabling a city.” From Emaar’s perspective, Sita also agrees to this: “What we did not want to do is put a lens or put a filter on Imagine Cup, because those are our lenses, and we truly want the youth to be able to define what they think is important.” Elaborating on a few expectations from the event, he says, “There are lots of things we're looking at: how do we create a fundamentally hassle-free journey, at every single touch point, how we are thinking about movement of people throughout the city; safety, security, health, education, frictionless transactions are key components that we are thinking about.”

According to a statement on the challenge, Microsoft also conducted road shows for the Imagine Cup making stops at various UAE universities, to focus on creating awareness among students, and encourage participation in the competition, emphasizing on ideas that will fuel UAE’s smart cities vision. The activities also featured training sessions to prepare interested students on how they can apply and submit their ideas. The organizers anticipate the Imagine Cup in UAE to reach over 5,000 students in universities across Dubai, Abu Dhabi, Sharjah, Ajman and Ras Al Khaimah. Deadline to apply is the March 05, 2017, so hurry and apply here to pitch your idea.