The $35 monthly service offers live TV streaming from 50 networks for $35 per month.

By Angela Moscaritolo April 6, 2017
This story originally appeared on PCMag

YouTube just made it a whole lot easier to cut the cord.

The service will set you back $35 a month, which YouTube said is less than half the average cost of cable, but on par with rival services like Sling TV, which starts at $20 a month.

For a full list of networks, check out the image below, though YouTube plans to add more networks to the roster in the near future, including AMC, BBC America, IFC, Sundance TV, WE tv and BBC World News. You can also add Showtime or Fox Soccer Plus for an extra charge.

"YouTube TV gives you the best of live TV, from must-see shows like Empire, The Voice, The Big Bang Theory and Scandal, to the live sports you want from the NBA, MLB, NFL and NCAA," YouTube wrote in its announcement. "Based on where you live, you'll get your local broadcast TV stations covering local sports and news."

Subscribers also get access to a cloud DVR with no storage limits, though it only saves recordings for nine months. Subscribers can share their account with up to five friends or family members, and each person gets their own recommendations and access to the cloud DVR. As a household, you can watch up to three streams at a time.

At this point, YouTube TV is only available in several large metro areas, including New York, Los Angeles, the San Francisco Bay Area, Chicago and Philadelphia. Try it out now free for a month; if you sign up, Google will give you a free Chromecast after your first month's payment. You can also watch on your phone, tablet or computer. 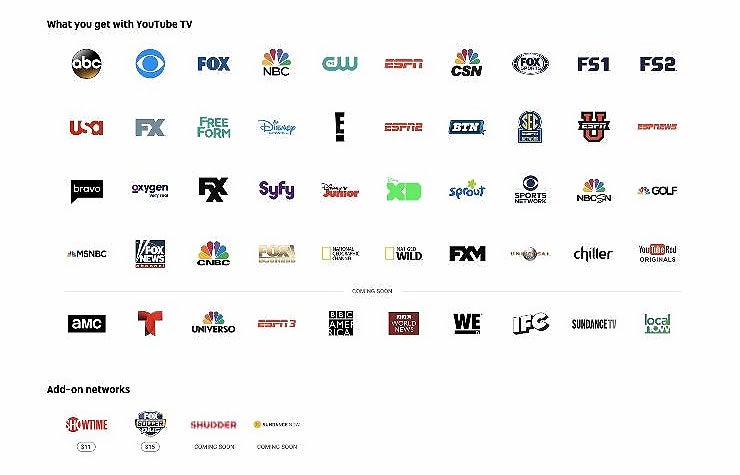