Uber Central is a new feature that lets business users book multiple rides at once for guests, VIPs and visitors.

By Juan Martinez April 19, 2017
This story originally appeared on PCMag

Finding a ride for your company's clients and VIPs just got a whole lot easier. Uber has unveiled Uber Central, a feature within Uber for Business that gives companies unlimited on-demand and spontaneous rides for third parties. Traditionally, Uber for Business was created to give employees access to a platform that would directly bill the business when rides were procured. However, users needed to have the application installed and they needed an account to schedule or hail a ride. With Uber Central, anyone with access to the account can book rides for a third party, even if the third party doesn't have an Uber account. The feature also lets an account book multiple third-party rides at once.

Here's how it works: If your hotel wants to help send its guests home, then Uber Central can help you book rides to the airport. The rides will then be charged to your Uber for Business account, from which you can monitor your trips and manage expenses. Another out-of-the-box use case lets hotel and bar owners order rides for patrons up until closing time to ensure that no one gets left behind or drives home drunk (as long as your company is willing to foot the bill for the expense).

Uber for Business charges a 10 percent premium applied to all rides taken. Uber Central, which falls under the Uber for Business umbrella, will follow the same pricing model. There is no limit to the number of Uber Central rides an organization can request. However, if businesses need the ability to request hundreds of rides per hour they can work with Uber's enterprise sales team to accommodate those needs, the company said in a statement. Each plan can have an unlimited number of administrators. 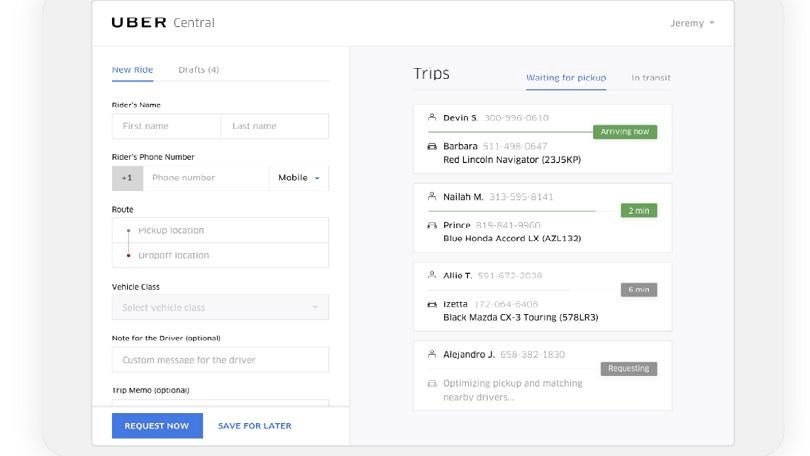 More than 8,000 companies tested Uber Central leading up to its launch. The Hotel Angeleno in Los Angeles booked airport rides for guests as they arrived in Los Angeles and as they left the city. The hotel also booked rides for users into the city when requested. To alert guests to the offering, the hotel built custom key cards that promoted the availability of Uber Central.

Roadside assistance provider Agero offered rides to customers whose cars needed to be taken into the shop. From the Uber Central dashboard, which can be managed remotely or back at company headquarters, Agero staffers booked rides from any location where motorists may have been stranded.

Uber for the business traveler

Meanwhile, general yellow taxi transactions have decreased to only 11 percent of all recorded rides, down more than 37 percent since the start of 2014. This has been a boon for Uber, which reported a gross bookings increase of 28 percent year over year during the first quarter of 2017.

Unfortunately, Uber continues to show up in the news for the wrong reasons. The company's CEO Travis Kalanick joined President Donald Trump's advisory board, which led to a public outcry (Kalanick later stepped down). The CEO also insulted one of his drivers on video. A third incident took place when Uber dropped surge pricing during the New York City transit strike against President Trump's immigration ban. Uber then made the news in light of its slew of sexual harassment allegations with which it's been dealing. But, perhaps most importantly, the company is losing money -- lots of it. Net losses in 2016 were approximately $3.8 billion, with $1 billion specifically lost in China.

Still, the company is valued at $69 billion by investors. Uber says it has $7 billion in cash and $2.3 billion in untapped credit. Coupled with innovative ideas such as Uber Central, Uber's coffers should help it right course and continue building on its ground transportation market share.