The iPad Was Supposed to Revolutionize News, Books and Computers. So What Happened?

iPad sales have been declining since 2013.

A few months after Steve Jobs introduced the iPad to the world, a device he called "magical and revolutionary" onstage, there was a team visiting Apple headquarters working to find ways to live up to that description. When the tablet came out in 2010, some people weren’t sure what to use it for. Apple had to demonstrate how you could lean back on a couch and read or watch a show, in a way that didn’t make sense on a laptop or a phone.

This team was scrambling to create something brand new for the iPad ahead of a splashy launch in New York. But the team didn’t work for Apple; they worked for Rupert Murdoch’s News Corp., and under the close watch of Jobs and Apple’s iPad team, they were trying to create the first newspaper designed specifically for a tablet.

The app would be called The Daily, and it looked like a tabloid come to life, with animated graphics and videos.

"There were regular visits to Cupertino where we showed them new prototypes," Jon Dobrowolski, who worked on The Daily as the head of product, said in an interview with Business Insider. "They would help us work through complex problems. We were doing things that hadn’t pushed the iPad that far."

It was clear Apple wanted The Daily to be a success as much as News Corp did. Jobs provided feedback on early versions of the app. There was a sense within News Corp. that Jobs would’ve been even more involved with the project if his health hadn’t started to seriously decline around the same time The Daily was gearing up to launch, Dobrowolski said.

It would’ve been the ultimate proof that the iPad had a purpose, even if that purpose was a bit muddy at launch. As the iPod changed music industry and the iPhone changed telecommunications, the iPad would change news and publishing.

In February 2011, a little more than a year after the original iPad launched, Murdoch, gathered a scrum of media and tech reporters at the Guggenheim in New York to unveil what he believed would be a transformative way to get news. 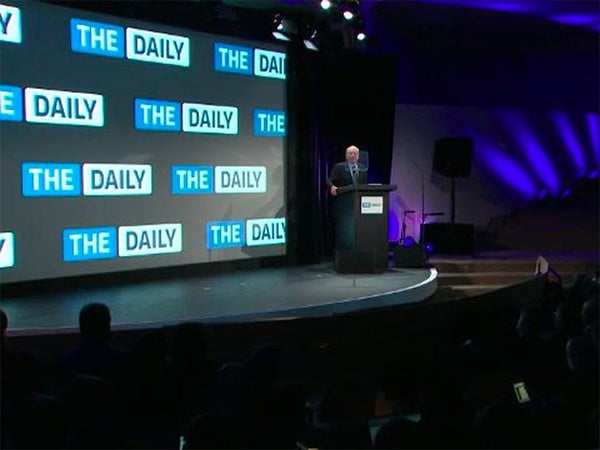 For 99 cents a week or $39.99 a year, subscribers to The Daily would get an interactive reimagining of a daily news publication, full of interactive charts, video and other electronic goodies along with high-quality journalism from a newsroom packed with editors and reporters with impressive résumés.

Apple’s iTunes boss at the time, Eddy Cue, was onstage as well, promoting the App Store’s new subscription model and giving his blessing to The Daily. He called the iPad a new category of device and boasted about the growing ecosystem of apps for it.

"The iPad demands we rethink our craft," Murdoch said from the stage.

The Daily shut down less than two years later.

It was the first sign that the promise of the iPad -- that it would upend industries like book publishing, education, the news media and even video entertainment -- would not come to pass. iPad sales have been in free fall since 2013. Ebook sales are plummeting by double-digit percentages as print books show a surprising renewed growth. Digital publishers have found more success on Facebook and other digital platforms, not tying their futures to one gadget. And despite a push to reinvent textbook publishing, Apple failed to make a dent in an industry controlled by big publishers.

"The role of the iPad was probably vaguer than any product Apple launched," said Jan Dawson, chief analyst at Jackdaw Research. "It wasn’t well defined."

And Apple is still trying to figure it out.

This week, Apple will host its annual World Wide Developers Conference (WWDC), where it shows off new versions of the software that powers its products. There are also rumblings that we might get a look at a new iPad Pro model with a 10.5-inch screen and shrunken-down bezels aimed at transforming the iPad from a media-consumption device to one that could replace your laptop.

But even Apple’s biggest fans have had doubts the iPad can be the new kind of computer the company wants it to be, and the onus is on Apple this week to put the tools in place to make it happen or risk failing to deliver on yet another promise. 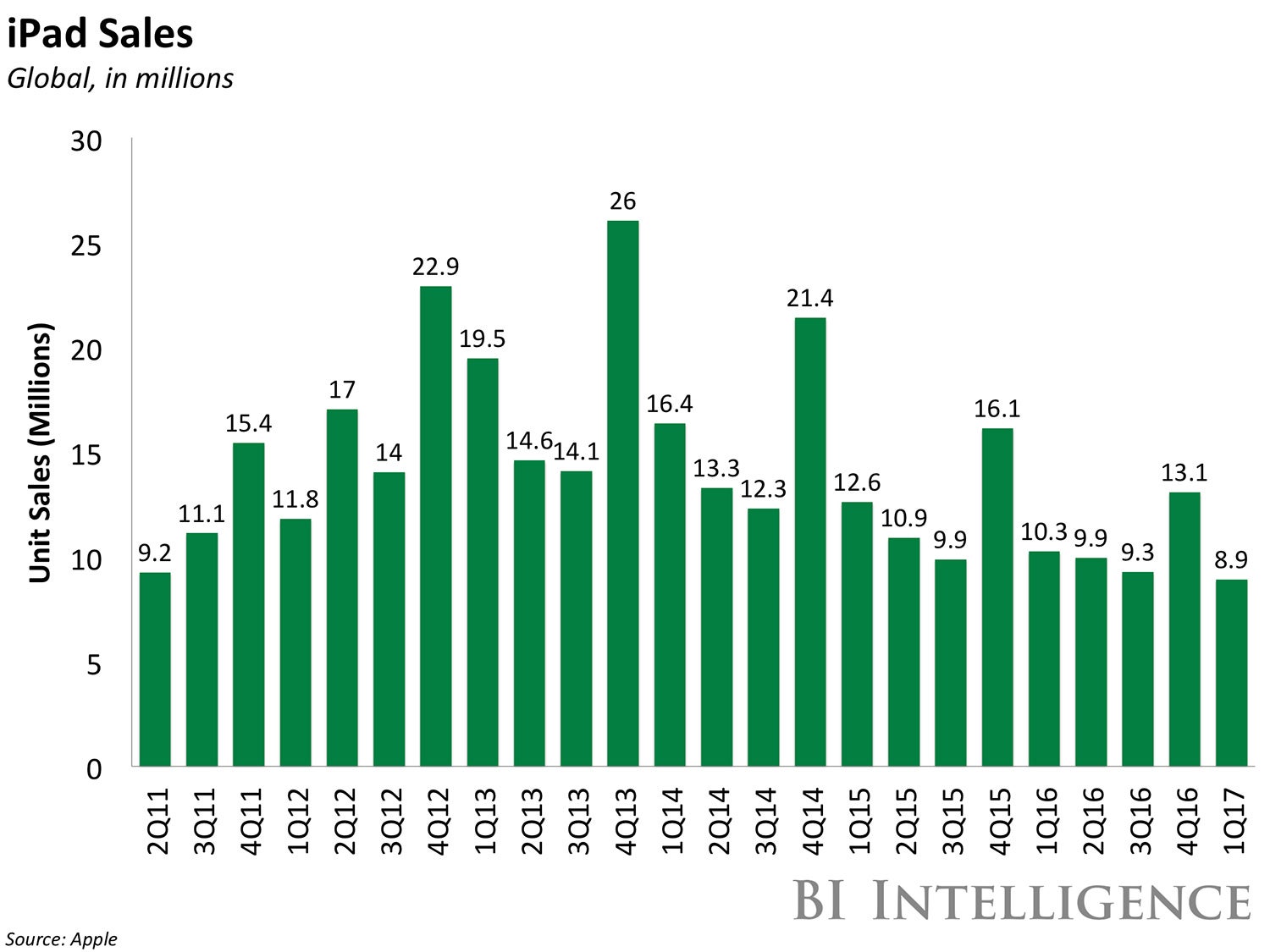 iPad sales have been declining since 2013.

Even the support from Apple couldn’t save The Daily, and it’s a useful lesson in why some of the early hopes for the iPad never panned out.

From the beginning, the app was plagued with bugs and crashes, which Dobrowolski blamed on the fact that the iPad was still essentially running software and chips designed for a phone.

The production process wasn’t as easy as News Corp. thought it’d be. When The Daily launched, News Corp. executives claimed they’d save on overhead costs and production time because they didn’t have to print and deliver a physical newspaper. Each issue would magically show up on subscribers’ iPads instead. 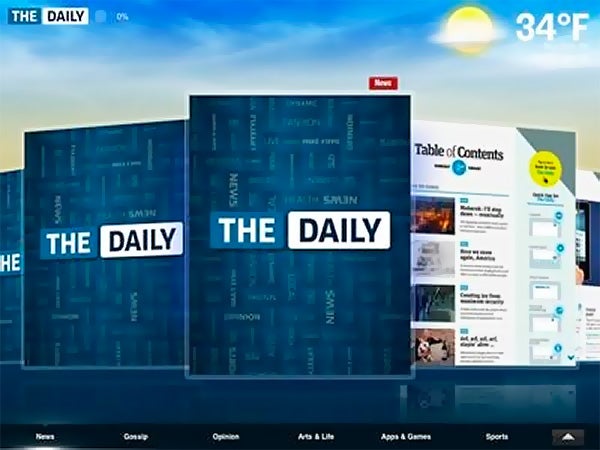 The reality: It took a lot more work to produce each edition of The Daily than originally thought.

Dobrowolski said the team would often work from 10 a.m. until 4 a.m. the next day, trying to get each issue out on time, wrestling with graphics and layout for both vertical and horizontal positions formats.

It turned out that iPad publishing was a tricky process, and, in the end, the subscribers simply weren’t there, forcing The Daily to announce it was shutting down in December 2012, not even two years after its debut.

No one tried anything on that scale again. The Daily was the most ambitious, but it wasn’t alone. Condé Nast and other major magazine publishers made efforts to transfer their portfolio of magazines to the iPad. But all those additional videos, graphics and animations could take up to a few gigabytes of memory with each issue, which turned out to be a bad experience since iPads had a measly 16 gigs to start with. Others were just PDF versions of the print magazine. Hardly revolutionary.

After The Daily’s failure, Apple tried in 2012 to take on the lucrative textbook industry with another high-profile event in New York, the heart of the publishing industry. The company debuted iBooks 2, a new ebooks app that featured digital, interactive textbooks from a few major publishers. But Apple fell largely silent about its ambitions to "reinvent the textbook" after the event, and there’s scant evidence that publishers have embraced iBooks over print.

"Apple hasn’t disrupted the textbook market at all," Dawson said. "Textbooks are a very high-margin business for publishers, and there’s little incentive for them to sell on the iPad. Without having them on board it’s really hard to disrupt a market like that."

A new kind of computer 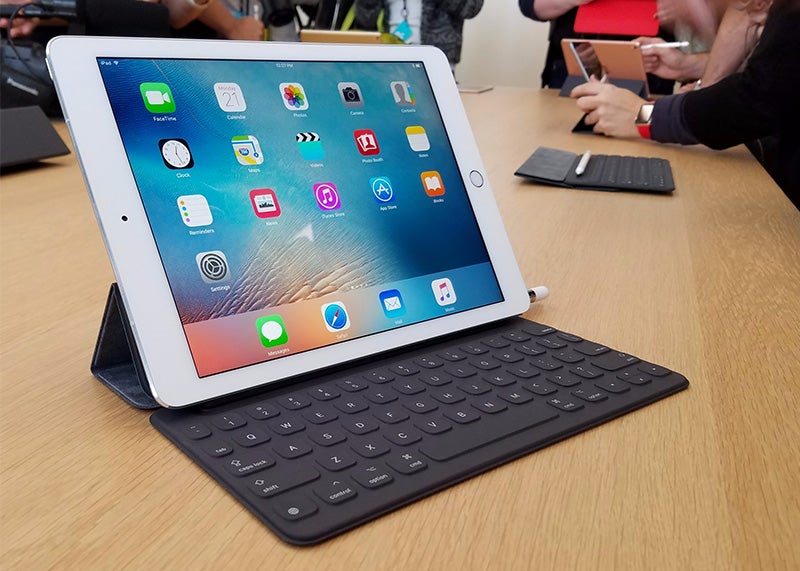 Apple now pitches the iPad as a device that can replace your laptop.
Image credit: Tech Insider/Steve Kovach

By the following year, the iPad saw its first sales decline, and it hasn’t recovered since. There were many factors to blame. Some said it was because people realized you don’t need to upgrade your iPad every year or two like you do with the iPhone. Others said Apple’s introduction of the big-screen iPhone 6 and iPhone 6 Plus ate into iPad sales.

So now we’re in the middle of another promise: The iPad as a laptop replacement. In 2015, Apple introduced the iPad Pro, adding more power, a larger screen and new capabilities thanks to a snap-on keyboard cover and $99 stylus called the Apple Pencil. CEO Tim Cook claimed in an interview before the Pro’s launch that the iPad Pro could do enough to replace a laptop.

It was a remarkable pivot and the first time Apple explicitly claimed it had made a new kind of computer. Jobs and other Apple executives had always talked about the long-term prospects of the iPad as a new kind of PC, but the iPad Pro was the first model in the product’s five years that was being marketed that way.

But critics, including some of Apple’s biggest defenders, aren’t totally buying it. Pro-Apple writer John Gruber wrote a long critique about the keyboard cover. "Trying to use the iPad Pro as a laptop with the Smart Keyboard exposes the seams of an OS that was clearly designed for touchscreen use first," he wrote.

Recode’s Walt Mossberg put it more bluntly, saying "because Apple hasn’t made a great keyboard, the iPad Pro isn’t a complete replacement for a great laptop like the MacBook Air."

It’s not just the hardware. While some apps like Microsoft Office have made it to the iPad, it’s still missing other essential productivity apps that could truly make it a laptop replacement. Much of the iPad app ecosystem is still populated with jumbo-sized iPhone apps, not the reimagined apps needed to take advantage of more screen space and extra power. The iPad’s split-screen feature helps a little, but it’s not enough.

The benefits would be enormous -- a device as powerful and capable as a laptop but packed in an ultrathin, portable package. No one has cracked that yet.

"The big challenge is how to evolve iOS on an iPad in a way that feels natural in that setting," Dawson said. "Apple has a tricky balancing act."

So now the pressure is on Apple to figure out where the iPad fits in. The iPad is far from a flop -- any of Apple’s rivals would kill to have a product that sells around 10 million units per quarter -- but it still hasn’t found a distinct purpose within Apple’s hardware ecosystem.

While the iPad made a great consumption device, it failed to disrupt the media and publishing industries that Apple and its early partners first imagined. And in the nearly two years since the iPad Pro’s debut, it’s unclear how successful Apple can be with its next major promise: turning the iPad into a dream device that replaces your laptop altogether.

As WWDC approaches, some are already speculating what Apple could do to take the iPad to the next level. (Scott Stein of CNET has a good piece on that very topic, where he suggests revamping the home screen, improving the Safari browser and more. It’s worth a read.) And if we do see new hardware, it’ll have to address the qualms critics have had with the keyboard.

The iPad has proved itself to be magical and successful. The next step is to prove it can be revolutionary.