Have documents read back to you with simultaneous word highlighting to help find errors and better support users with learning disabilities.

By Matthew Humphries August 1, 2017
This story originally appeared on PCMag

This week Microsoft rolled out a number of new features heading to Office 365. The stand out addition is a feature called Read Aloud in Word, which you'll eventually find available under the Review tab on the Word menu. 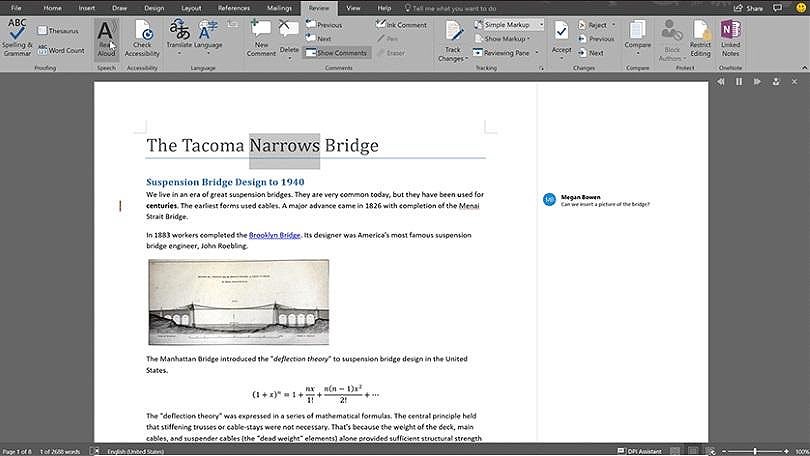 When enabled, Read Aloud allows you to hear any given Word document being read out loud while each word is highlighted simultaneously. By going through this process, Microsoft believes it is easier to recognize and correct errors. And because Read Aloud happens within the existing work flow, it's easy to rectify each error as soon as it becomes apparent.

Microsoft also views Read Aloud as beneficial for users with learning disabilities such as dyslexia. It should allow for improved reading and accuracy, and ultimately more error-free documents.

Other new features of note include the ability to turn text into timelines in PowerPoint and support for 3D objects in Office apps. PowerPoint Designer tracks any times, dates and associated topics placed in slides and can intelligently create professional-looking timelines using that information. As for 3D support, Word, Excel and PowerPoint will all accept 3D objects from the Remix 3D catalog. In PowerPoint, you can even create cinematic animations using Morph on those objects.

For now, these new features are being made available to Office Insiders, but Microsoft says they will "reach general availability later this year" for all Office 365 users.

Switching to Windows 11? Learn How to Use It.

3 Tech Stocks That Wowed The Analysts

Why Implementing IT Service Management Is More Crucial Than Ever

4 Penny Stocks Up Big With The Stock Market Down Today; Time To Buy?