World Economic Forum report for 2017-18 stated the ranking of 137 global economies, based on factors driving countries' productivity and prosperity

Policy makers of a country are constantly working on measures to make its economy competitive in the world. In doing so they take great care to make sure that the steps are reasonable enough to achieve a lasting growth and development.

A recent report by World Economic Forum titled ‘The Global Competitiveness Report 2017-2018’ showed the ranking of 137 global economies, based on factors driving countries’ productivity and prosperity. The global competitive index is calculated by collating country-level data, covering 12 categories – the pillars of competitiveness – that collectively make up a comprehensive picture of a country’s competitiveness.

“Ten years after the global financial crisis, economies remain at risk from further shock and are ill-prepared for the next wave of innovation and automation,” the report revealed.

Entrepreneur India takes a look at key findings of the global competitiveness index:

Switzerland Has World’s Most Competitive Economy 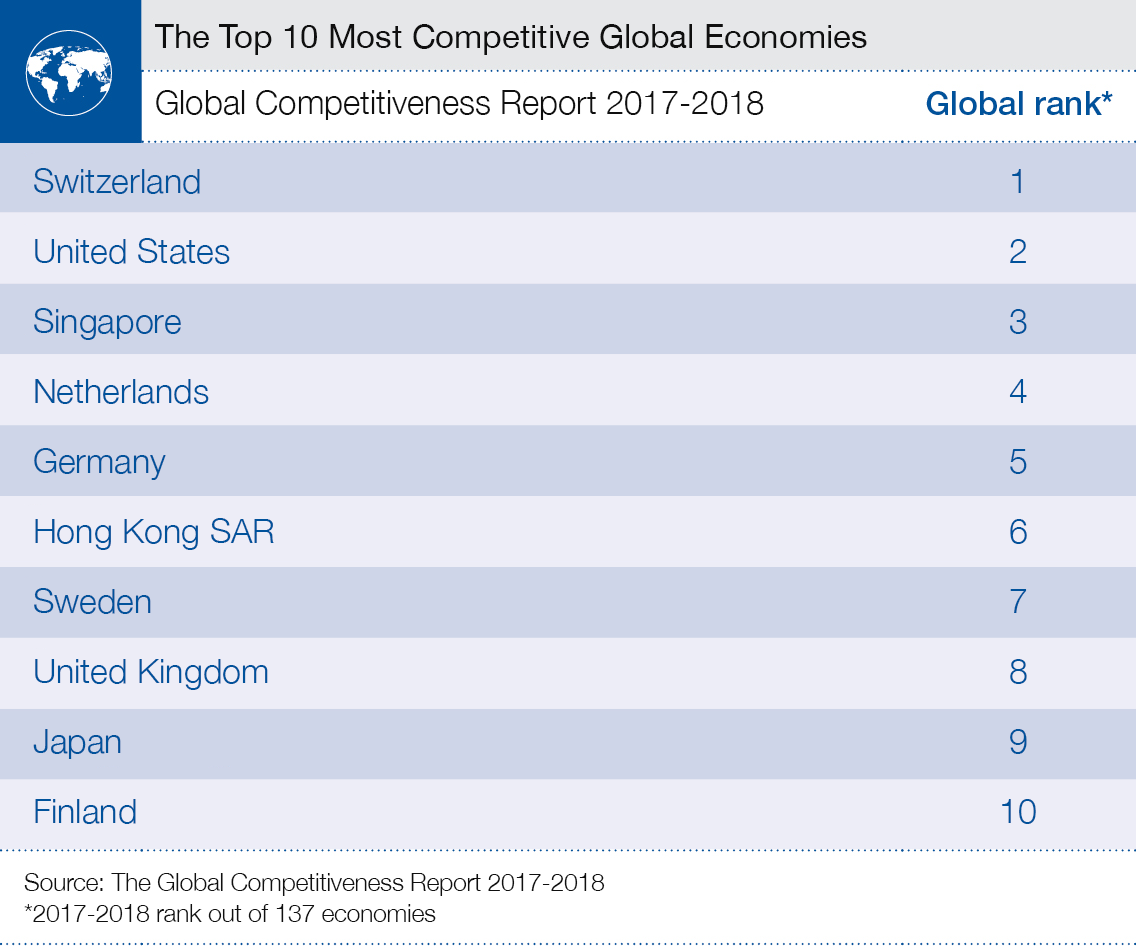 The Switzerland-based organization’s report stated that for the ninth consecutive year, Switzerland is the world’s most competitive economy, narrowly ahead of the US and Singapore. Other G20 economies in the top 10 are Germany (5), the United Kingdom (8) and Japan (9). China has the highest ranking among the BRICS countries, climbing up a rank to 27 from 2016.

From the list of factors, respondents to the World Economic Forum's Executive Opinion Survey were asked to select the five most problematic factors for doing business in their country and to rank them between 1 (most problematic) and 5. The score corresponds to the responses weighted according to their rankings.

India has slipped from the 39th position to 40th, but remains the most competitive country in South Asia, as most countries in the region are improving their performances. Two Himalayan countries Bhutan (82nd rank) and Nepal (88th rank) are among the most improved countries globally while Pakistan (115th rank) and Bangladesh (99th rank) have both improved their scores across all pillars of competitiveness. Improving Information and Communication Technology (ICT) infrastructure remains the biggest challenges for the South Asia region.

World Is Moving From Capitalism to Talent-ism

Klaus Schwab, Founder and Executive Chairman, World Economic Forum commented that in future global competitiveness would be more and more defined by the innovative capacity of a country. Talents will become increasingly more important than capital and therefore the world is moving from the age of capitalism into the age of talent-ism.

Countries preparing for the Fourth Industrial Revolution and simultaneously strengthening their political, economic and social systems will be the winners in the competitive race of the future.

Coronavirus: What It Means For the Mankind and the Economy