By Sindhu Hariharan October 10, 2017
Opinions expressed by Entrepreneur contributors are their own.
You're reading Entrepreneur Middle East, an international franchise of Entrepreneur Media.

MAGNiTT MENA’s Q3 2017 Funding Report is here, and the data reinforces the powerful surge of fundraising wins in the ecosystem that we’ve all been coming across lately. According to the report, 2017 has recorded a strong trend of growth of investments in MENA startups with deal count in the first nine months of 2017 (169 deals), surpassing entire year of 2016 (164 deals). The third quarter of 2017, in particular, is also reported to be “the strongest Q3 in recent history” clocking 62 new deals and over $75 million in investments. However, it’s worth noting that this performance is lower than the bumper funding seen in the previous quarter (Q2 2017) of $109 million in funding across 64 deals (even excluding Souq and Careem’s large fundraisings).

With regard to startups that were victorious this quarter, fintech continued its momentum as a buzzing sector in the region gaining 2% in deal count from previous quarter, and fintech enterprises also comprised the top three of the five largest investments in Q3- Paytabs ($20 million), Souqalmal.com ($10 million) and Beehive ($5 million), Altibbi ($6.5 million) and Foodics ($4 million) make up the top five. MAGNiTT founder and CEO Philip Bahoshy believes that overall, the investments trend is positive this quarter. “When looking at the data, it is clear that there is an emergence of new players in the funding landscape which is healthy for startup investment. As well there is greater appetite to invest at all levels of startup stage,” he notes. 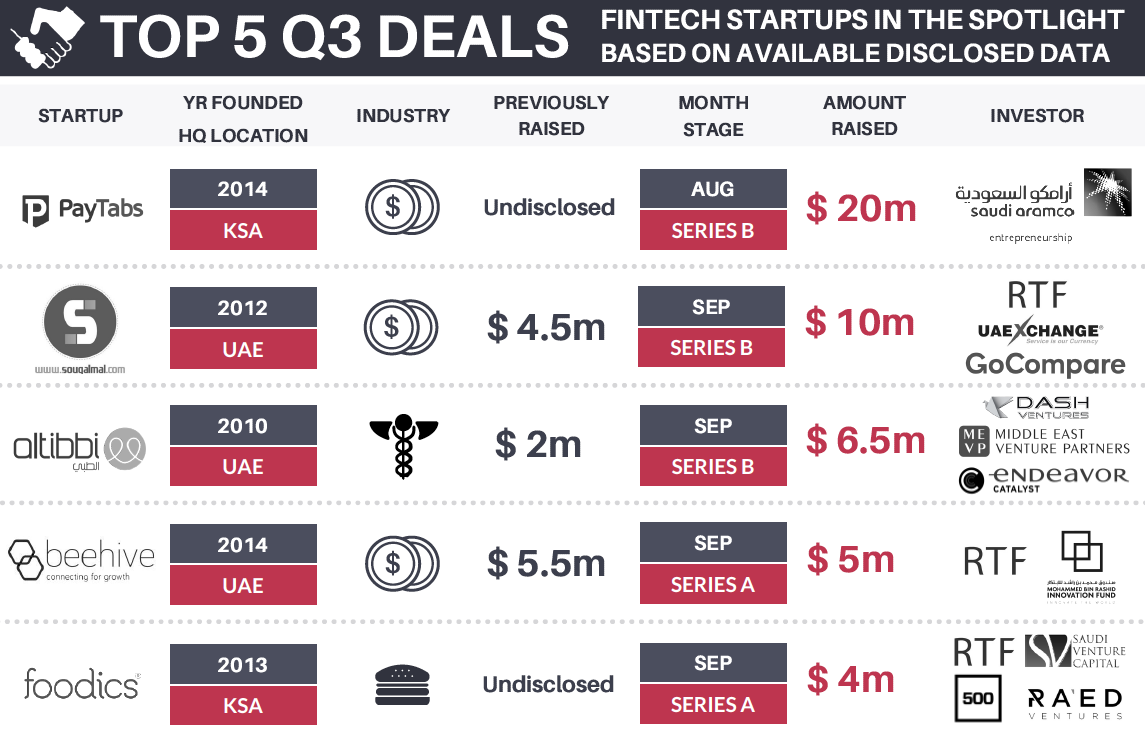 Surprisingly, the e-commerce sector in MENA seems to be lagging behind others this quarter, reporting a 4.5% drop in deal count. Commenting on whether this may be a sign of sector consolidation of sorts, Bahoshy notes that while quarterly data may not be conclusive, there does seem to be a slowdown in the emergence of e-commerce sites across the region. “This will definitely have been as a result of the entrance of Amazon in the region, the creation [existence] of Souq.com, and the consolidation that has taken place in that space,” he says. Further, he adds that two out of the five exits that took place in Q3 2017 were also found to be that of e-commerce platforms.

In case of markets gaining from the funding upswing, the UAE continues to be the dominating market with 50% of all deals and 37% of all funding amount (excluding Careem’s funding of $150 million) in third quarter. However, interestingly, the period has seen an increase in investment activity in Saudi Arabia with the Kingdom reporting a 10% rise in deal flow year-to-date from Q2. “KSA, as a market, has showed continued growth and interest in the entrepreneurship space. With the launch of Vision 2030, funds allocated by PIF [Saudi Public Investment Fund], and emergence of new VCs from the Kingdom, we believe that this trend is likely to continue to grow,” Bahoshy opines.

Besides robust participation from VC firms usually active in the MENA region, 500 Startups, following the launch of their Falcon Fund in MENA, have been the most active VC by number of deals (16). MEVP with 10 deals, and Turn8 with 8 deals followed close behind. KSA-based VC’s have also made their presence felt with Riyad Taqnia participating in three out of the five largest investment deals.