Shopify | Brand Spotlight Partner What is this?

The biggest trends and lessons from Black Friday Cyber Monday 2016 to help you for 2017.

Black Friday Cyber Monday (BFCM) marks an annual opportunity for businesses of all sizes to attract shoppers in the deal-seeking spirit.

At the peak of BFCM in 2016, the Shopify platform alone processed over $555,716 transactions in a single minute. That’s a lot of orders.

But whether you saw success last year or stumbled through the season, it’s always worth dissecting what happened to do even better this year.

To help you plan ahead, here’s a look back at some of the biggest trends and lessons we can glean from Black Friday Cyber Monday 2016 to help you crush it in 2017.

Just because BFCM weekend runs from November 24th to 27th, doesn’t mean the opportunity exists solely between the Friday and the Monday.

In fact, searches for “deals” on Google actually start to rise near the beginning of November, many days before BFCM.

According to research conducted by RetailMeNot last year, 85 percent of shoppers expected deals before Black Friday with a 21% spike in interest as early as November 7th.

As a result, businesses are starting their holiday marketing earlier. In a Shopify podcast last year, Quan Nguyen of cosmetics brand 100 Percent Pure, shared his thoughts about this trend:

“Three years ago, it was just a weekend. We started about a day earlier for Cyber Monday and Black Friday. Then last year, we started three days earlier. I think this year, we’re going to start a week earlier. That’s what we notice as a trend. People are just starting their Black Friday and Cyber Monday promotion earlier. So we want to be the first one to send out the email to catch shoppers’ attention.”

In short, BFCM isn’t an isolated event but the height of a season where shoppers are actively seeking out and expecting deals.

2. BFCM isn’t only for Americans anymore.

Both Black Friday and Cyber Monday originated in America and are still most popular at home.

But the event is also gaining traction in other parts of the world, seeing the most notable growth in Spain and Denmark, according to Shopify’s data from 2016. 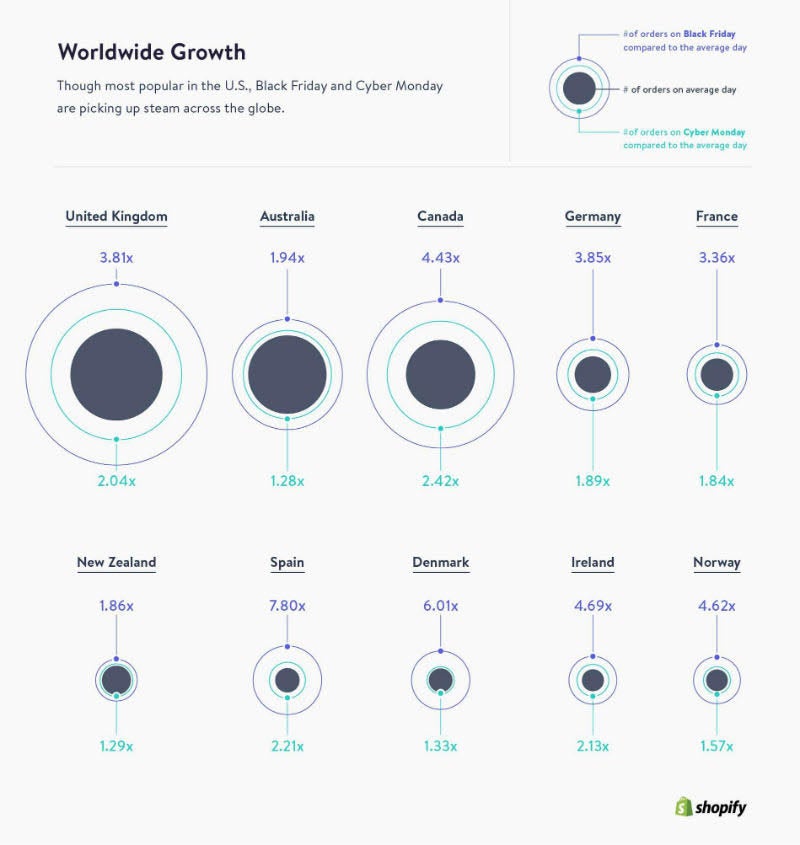 While you can expect each market to have its own nuances, in many cases the growth in adoption is only just getting started. In Spain, for example, the first stores started participating in BFCM only 5 years ago, with more and more retailers getting on board.

If you’ve been promoting your BFCM deals in America mostly, there may be international markets worth paying attention to this year or in the near future.

3. Mobile devices are a close companion for shoppers.

By now, you probably expect every website you visit to be mobile-friendly. And that goes double for shoppers who now find convenience in carrying out their shopping across multiple devices.

Mobile shopping has given consumers the option to shop through their phones, on the couch, on their commute, or even in-store.

Smartphone purchases are now a more-than-viable alternative to desktop transactions with payment options like Apple Pay, Android Pay, and Shopify Pay, paving the way for a more frictionless mobile checkout. 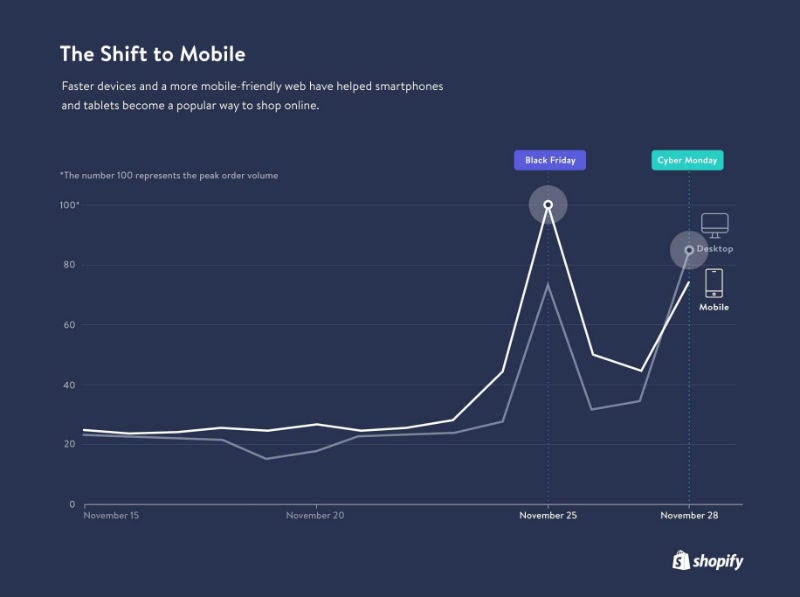 Besides buying, consumers are also turning to their phones to conduct another part of the shopping process: research.

According to a survey by Google last year, 82% of smartphone users say they still consult their phones about in-store purchases with 60% starting their shopping on one device and finishing it on another.

The way we choose to shop is now a matter of preference, convenience, and context—BFCM marketing campaigns need to be integrated across different channels to address all the different touchpoints where a consumer might learn about your deals.

And now, more than ever, it’s important to offer a consistent experience for shoppers regardless of their device of choice and to start embracing mobile shopping as shopping. Period.

Black Friday Cyber Monday represents a growing opportunity for everyone, but that also makes it a fierce competition for consumers’ hard-earned money. BFCM, for many businesses, is pay-to-play through search engine and social media ads.

Smaller retailers going up against larger companies often don’t have the big budgets to compete on the same level for reach.

But they may have a loyal audience and existing customers they can rely on to support their small business.

According to Dylan Jawahir of Battle Balms, who shared his BFCM experience from last year with me, it’s about using your advantages to make up for a smaller advertising budget:

“I learned that as a small business owner with limited funds, I'm not going to have the reach that the bigger companies have. I can't compete with their large budgets. I can't do it all myself. So, I focus on promoting Battle Balm to my existing customer base in a way that incentivizes them to tell their friends. It takes a little bit of preparation up front, but by leveraging my fan base, I get increased sales, while my fan base is rewarded for spreading the good word! Everyone wins!”

Whether it’s through referral marketing or enticing customers to share a deal with their social network, selling through an existing network of customers can be a more cost-effective way for small businesses to participate in BFCM.

5. Email can be your most profitable marketing channel.

As mentioned before, you’ll want to consider promoting your deals well before BFCM and email marketing is a reliable way to do that without paying to reach customers.

Since you’ll likely be offering your products at a discount for BFCM, marketing channels where you’re not paying for reach are especially valuable and worth doubling down on throughout the season.

In a case study conducted by Shopify’s Stockroom store for BFCM last year, where the team explored organic marketing tactics, email turned out to be the most profitable channel. While only 4 emails were sent solely around BFCM, the results were a pleasant surprise given the simplicity of the campaign.

With further planning, an earlier start, and a longer campaign, email marketing could have been used to reap results throughout the entire deal-seeking season. You can read the full case study to find out how other unpaid tactics fared during BFCM.

BFCM presents a huge opportunity for businesses to capitalize on the year’s busiest season for buying.

But it takes more than an attractive offer to succeed—it takes careful planning and forethought in how you think about marketing to reach consumers.

Check out our Black Friday Cyber Monday Toolbox for free tools and resources to help you succeed during BFCM 2017.