Boxed is one company that's playing the long game when it comes to boosting efficiency with automation.

Boxed, an online wholesaler, is all about convenience. It allows customers to stock up on essentials, from toilet paper to La Croix, save money by buying in bulk and save a trip to a store such as BJs, Costco or Sam’s Club by having items delivered.

To provide this experience at scale, Boxed has four fulfillment centers across the U.S. At each of these locations, dozens of full-time employees retrieve or pick items and pack them into boxes to be shipped to customers’ homes (similar to how Amazon does it). The average order includes nine items, and Boxed employees spend a lot of time and energy walking to different aisles within the warehouse to gather the right goods.

While Boxed has built software systems that help optimize paths and minimize repeat trips to the same aisles, that’s just the beginning of the company’s efforts to improve efficiency in its fulfillment centers -- a task many ecommerce companies face.

Boxed is just one example of a company that’s flipping the grim narrative about automation by committing to keeping its workers employed. Others that have boasted zero layoffs amid automation are Evian and Accenture. Evian, for example, replaced manual forklifts with automated shuttles when it opened its new bottling plant, then retrained forklift drivers to become technicians. In total, the company offered 30,000 hours of retraining for its workers, and it hired 200 additional people when the plant opened, TriplePundit reports.

And then there’s Amazon. In 2012, the company acquired a company called Kiva for its bots that could navigate to inventory pods and autonomously drive them to human packers. For the past three years, the retail giant has held an annual Robotics Challenge to encourage the development of new technologies to automate other aspects of the fulfillment, including picking inventory.

Boxed executives also realized the potential for efficiency gains through automation, and it has begun researching and developing new technologies to speed up the picking process. But the company’s goal is not to replace its existing employees with robots to save money, though that’s the common narrative surrounding automation: That it will warrant a robot tax on employers that displace workers with tech (an idea backed by Bill Gates) or require a universal basic income (posited by Elon Musk and Richard Branson) when the robot revolution leaves an entire class of society jobless.

“We’re committed to building technology to work alongside humans,” says Will Fong, Boxed co-founder and CTO. “With that said, we’re really looking to kind of enable the workers to do more with less.” 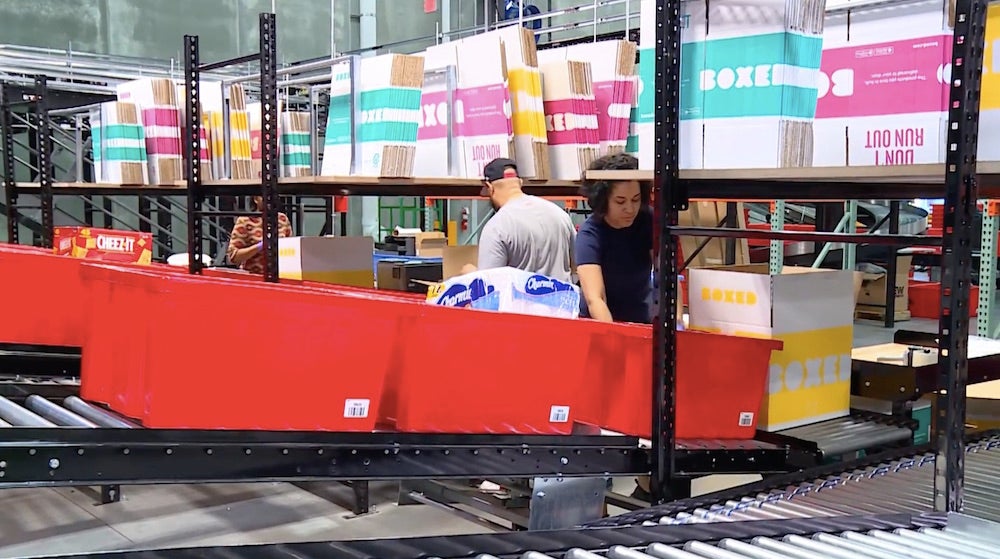 Most pickers have been able to transition to this type of picking role, but in some cases, they’ve been retrained to perform other roles within the company, such as customer service. Box loaders have even worked their way up to operations and managerial positions. Fong tells Entrepreneur that as Boxed evolves its automation efforts, the company will work to reallocate workers within the fulfillment centers.

Now, pickers don’t have to walk through the warehouse -- items come to them via cart. The pickers put items into totes that are transported by the carts. Then, their packer counterparts take what's in the totes and put them into boxes for shipping.

Boxed has been rolling out the carts over the past couple of weeks, and Fong estimates each of the three fulfillment centers will eventually have between 30 and 40 carts. While Boxed expects the fulfillment centers with carts to be just 80 percent as efficient as the one with the conveyor system, the lower cost of implementing the system will make up for it. Carts at each facility will cost Boxed 10 to 20 percent what it took to build out Union’s automation.

“As we’re thinking about what robots can do, also open minded in exploring other ways to utilize these carts,” he says, thinking long term. “For example, what would it look like if these carts were used to turn retail centers into mini fulfillment centers?” Other uses down the road may include replenishing items in the warehouses and transporting supplies -- again, alongside humans.

“We do see many executives, despite stereotypes about them being heartless capitalists, being quite interested, concerned and motivated on this question of, how do we keep people working?” says Michael Chui, a partner at the McKinsey Global Institute. “My observation is that, if somebody’s motivated and there’s something interesting for them to learn to do, and help provide for their families, in many cases, people will be interested in doing that.”

One point he makes is that, as employees’ jobs become automated, despite a company’s intentions to keep them on board, an employee might determine that the best use their talent is actually at a different company.

“So you run into this question of, ‘If I’m the CEO, and my employee’s next job that would suit them best is at a different company, how much does it make sense for me to retrain them versus another company versus have that training supported by broader society?’” Chui says, emphasizing that “investing in people” and supporting them through retraining efforts might be viewed as a perk by potential hires, as well as rehires who get retrained at a company, go work for another and build their skills further, then return.

A lot can be said for creating a company culture in which automation is viewed as an opportunity, not a sacrifice. Chui says that workers in jobs that are likely to be automated in the near future, be the warehouse workers or truck drivers, should not be underestimated in terms of their awareness of what lies ahead. Business leaders can engage in candid, mature conversations “about the fact that technology will change everyone’s job going forward,” he says.

ServiceNow (NOW) Dips More Than Broader Markets: What You Should Know

Raytheon Technologies (RTX) Stock Moves -0.67%: What You Should Know