Why You Need to Always Be Questioning Yourself

We should always be asking: Why am I doing this? And can I do it better?
Next Article

I want to tell you about the time I admitted I didn’t know what I was doing. When I realized I wasn’t the right man for the job, and I started asking uncomfortable questions about my role here at Entrepreneur -- questions my peers might scold me for asking. And then I looked to an unlikely ally for help.

Related: 3 Questions That You Should Regularly Ask Yourself That Can Transform Your Life

It all started when I asked, Am I doing something simply because that’s the way it’s always been done? This is, after all, the question all entrepreneurs ask themselves. I write about it all the time. But in practice, asking this question isn’t easy. It requires us to look critically at things we may not have realized were broken, like wandering through a mansion to examine every floorboard. It is, frankly, an exhausting question to ask. It’s hard to even know where to start. And once you find something to improve, it’s not always clear how to fix it.

But I’m here to tell you about the great, unexpected payoff of asking this question. It forces you to look at things in completely new ways, and can lead to solutions you couldn’t have foreseen. For me, I began by asking something very basic about my own writing ability, and it led to something else entirely: The creative agency Huge helped redesign Entrepreneur magazine’s cover.

How did we get from one to the other? That’s the fun part.

Here’s the question I started with:

Why am I, the editor in chief, writing the cover lines?

“Cover lines” is magazine parlance for the headlines you see on a magazine cover. Every magazine where I’ve worked developed cover lines differently. At one, for example, editors were invited to stand around a wall of layouts and toss out ideas. At another, it was a closed-door session with one or two top deputies. But the end was always the same: The editor-in-chief made the final decision, and that’s what went to print.

When I took this job, I mindlessly followed suit. I’d workshop ideas with fellow editors and the president of our company, but ultimately I was the guy writing the lines. Had I become editor-in-chief anywhere else, I might have never questioned that process. But at this magazine, I’m inspired every day by the people we write about. Entrepreneurs live in what LinkedIn co-founder Reid Hoffman calls “permanent beta” -- a state of constant reinvention, of never settling. They get comfortable asking themselves uncomfortable questions. And so, I aspire to do that in my own job, too. Which gets us back to Why am I, the editor-in-chief, writing the cover lines?

Related: 10 Motivating Quotes to Help You Spring Into Action

To answer that, I must make some uncomfortable admissions. To start, my job is to oversee editorial, but the cover, if we’re being honest, is not a piece of editorial. It’s a piece of marketing; its purpose is to sell the magazine. But I don’t have a background in marketing. I have no idea how to write marketing copy! And that means I’m quite possibly the exact wrong guy for this task.

Honestly, I don’t feel bad about this. It’s good to know our strengths -- and a great strength, I believe, is the ability to recognize our own weaknesses. So what would happen, I wondered, if I stepped aside and got actual marketing people to write the cover lines for an issue?

I had a hunch that Huge would be up for this challenge. It’s a (ahem) huge creative agency based in Brooklyn that first caught my attention in 2011, when it helped create HBO GO. I got managing director Jason Schlossberg on the phone, explained my thinking, and proposed a challenge: I’d come by and explain what we had planned for a coming issue, and Huge’s writing team could tell me what to say on the cover. “That’s really interesting,” Schlossberg said. He promised to confer with his team and get back to me.

A few days later, he did -- and upped the ante. Rather than just rethink who’s writing cover lines, he said, why not rethink the cover entirely? Huge was willing to research our readership and then approach the task like a marketer, applying advertising principles to magazine design.

Here again, I was faced with an uncomfortable question. After a year of refining our covers, we’d recently settled on an aesthetic we liked. It was clean, clear and elegant. Could we really entertain throwing it away and starting fresh?

A few weeks later, Huge sat me and some colleagues down for a presentation. It opened brutally. Huge put our magazine covers -- our beautiful, recent magazine covers! -- up against our competitors’, and gave us some real talk: Our work looked exactly like other business magazines. And then, in four slides that contained only text, Huge changed everything.

Slide #1: “You’re a magazine for and about entrepreneurs -- the very people who seek out something new, different.”

Slide #3: “You have permission to be unlike any other magazine on the rack.”

When I read that last one, I wanted to leap from my chair and just…I don’t even know. I felt like I had things to do. Things to fix! Huge was totally right -- and what a thrill! What freedom! And yet, how many other ways am I failing right now? How many rules am I conforming to? How many questions am I not asking? I started to feel a mixture of exhilaration and dread. This is the beauty and curse of entrepreneurship, I realize: We see opportunity everywhere, but we cannot actually be everywhere.

Huge went on to show us 16 cover mock-ups (some of which you can see below). A few were made to look like book covers. Others aimed to make the magazine more premium or playful. Their research found that our readers love lists, so one cover contained a list of reasons to pick up the magazine. At the end, I pronounced myself a changed man. I wanted to do something bold and new with our covers. But that meant getting approval from our corporate leadership. I wasn’t sure how they’d react. 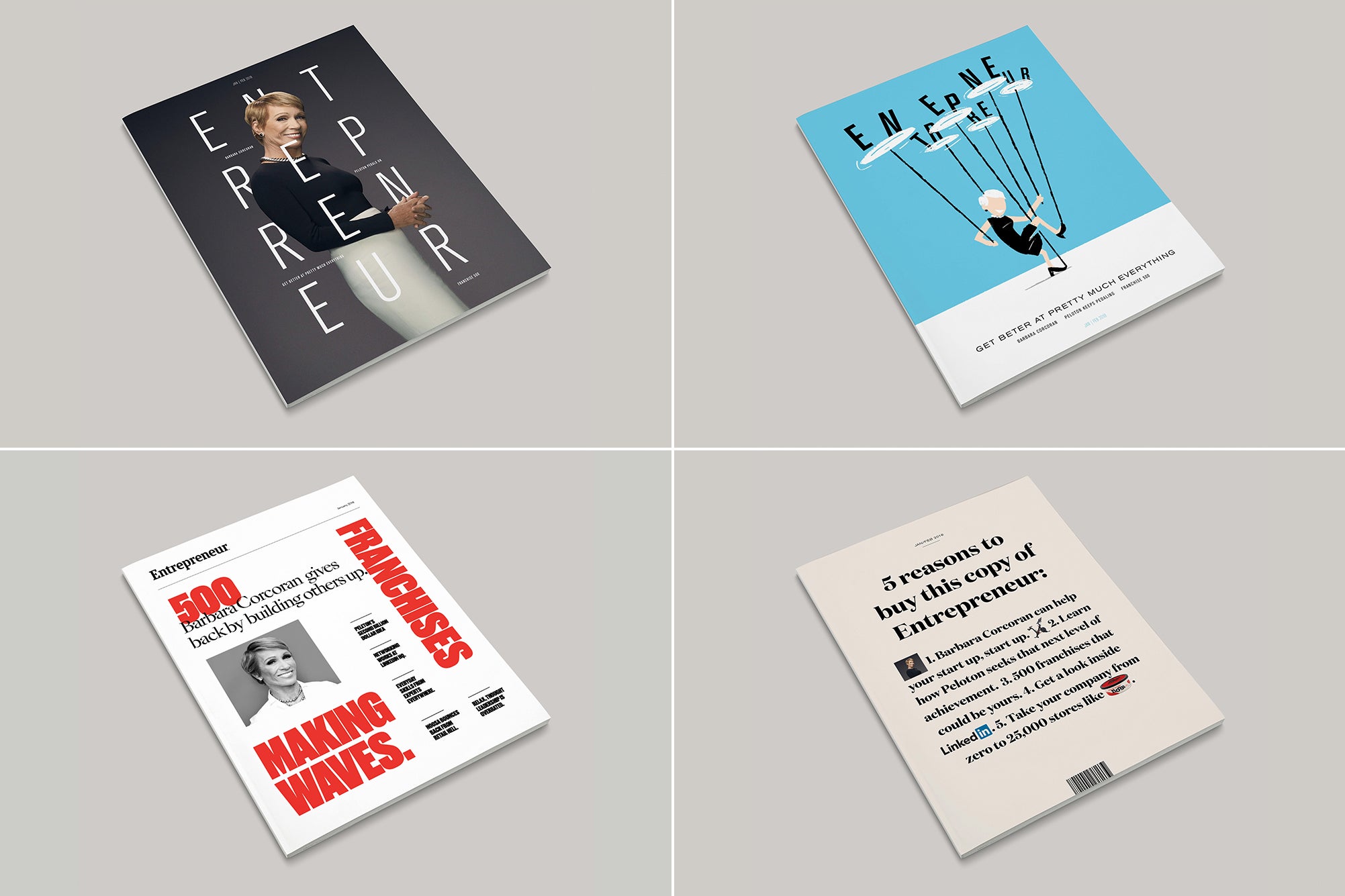 Here, I would gain yet another lesson in this process: Radical thinking builds its own momentum.

Back at the beginning of this, I asked myself a simple question about cover lines. That led to me talking to Huge, and then Huge, in turn, made the devastatingly correct point about just how similar we were to our competitors. It was a snowball effect -- the sense of change growing ever bigger and stronger. I sent the report to Bill Shaw, our president, and he found it as energizing as I did. Soon our creative director, Paul Scirecalabrisotto, was mocking up a new cover inspired by one of Huge’s designs. We all loved it.

Related: 10 Questions to Answer When Writing Your Mission Statement

So that’s how our new cover design rolled out in March. All because I asked myself an uncomfortable question.

Of course, our new cover wasn’t as radical as some of Huge’s other cover proposals. But it felt like the right step for us -- a testing of the marketplace. Rest assured, we’ll make more changes along the way. Now that I’ve started asking myself, Am I doing something simply because that’s the way it’s always been done?, I don’t think I’ll ever be able to stop.

Want Something From Someone? Do the Work for Them.

The Pandemic Created New Opportunities. Here's How to Find Them.

Why 2020 Made Us All Better Entrepreneurs

Why You Should Break Through Your Boundaries

When's the Right Time to Pursue Your Passion? It's Right Now.