By Komal Nathani April 4, 2018
Opinions expressed by Entrepreneur contributors are their own.
You're reading Entrepreneur India, an international franchise of Entrepreneur Media.

Reacting to the incident, Google CEO Sundar Pichai shared a heartfelt letter and extended support to Google employees to heal them for this shocking tragedy.

Here is the note that Pichai just sent to Googlers worldwide on Twitter: 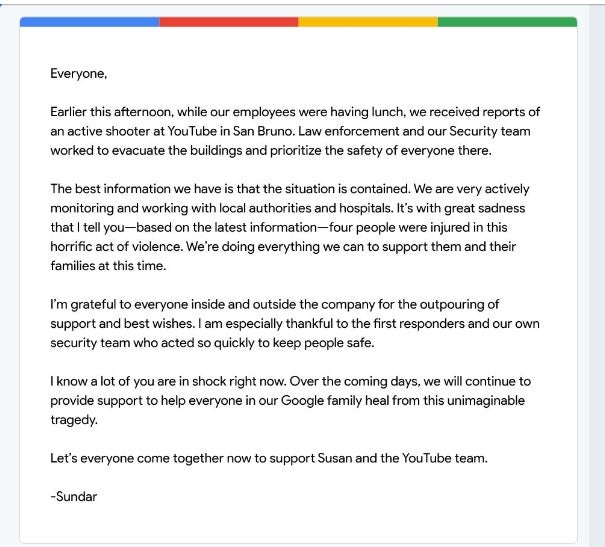 Here is the note that @sundarpichai just sent to Googlers worldwide. pic.twitter.com/bdC6KeTl9c

On behalf of the team at @Uber, sending support to everyone @YouTube and @Google, and gratitude to the heroic first responders. Another tragedy that should push us again to #EndGunViolence

From everyone at Apple, we send our sympathy and support to the team at YouTube and Google, especially the victims and their families.

On behalf of all of Microsoft, our hearts are with everyone at YouTube and Google today and all those affected. https://t.co/dijMxGXGpD

In the press release shared by the San Bruno police, the woman has been identified as Najim Nijafi Aghdam who was in her late 30s.

The 39-year-old woman allegedly used a 9 mm handgun as she shot three people and injured a fourth before committing suicide at the tech company's headquarters near San Francisco on Tuesday. Aghdam approached an outdoor patio and dining courtyard on the campus around lunchtime and began to fire before entering the building said the press release.

According to media reports, the woman began to fire before entering the tech company’s headquarters in lunchtime on Tuesday.

The San Bruno police said in their press release that the motive of the female suspect was unclear. However, Aghdam’s father claimed she was furious at YouTube because the tech company had stopped paying her for her videos on YouTube.

According to the reports by news agency Reuters, YouTube had deleted her Aghdam’s account on Tuesday evening. The attacker had reportedly posted rants online and on her personal website about the YouTube’s censorship.

A website called The NasimeSabz.com is said to be linked with the attacker. According to media, the website talks about vegan activism, animal rights and free speech in the real world.

As the the inside story unfolds on what could have been the real trouble between the suspect and the tech company, our hearts go out for Google employees present at the YouTube headquarters earlier today.

(With inputs from news agencies)

Jake Paul Was Living in a 'Fantasy World' as an Influencer in LA Until Boxing Changed His Life: 'You've Got to Grow Up at Some Point'

How much will the cheapest version of YouTube Premium cost?

Social Media Is the Gold Rush of Our Time. But When Is It Going to End?