Mark Wiens never had a 9-to-5 job after graduating college. Now he has nearly 1.8 million subscribers and has visited dozens of countries.

Mark Wiens's goal after graduating from college was twofold: travel the world and earn enough money so he could continue traveling.

Ten years later, Wiens still embarks on trips throughout the world, including to China, Mexico, Laos, Turkey, Dubai, Austria and dozens of other countries, eating dishes such as jacuzzi chicken, poop fish chilli dip and Oaxacan mole negro -- and it's all thanks to YouTube.

"It was my goal to earn money in any way that I could," Wiens says. "However, my goal was never to be a YouTube person."

Since joining YouTube in 2009, Wiens, who was born in America and now lives in Bangkok, has amassed nearly 1.8 million subscribers and racked up nearly 373 million views. He also has another channel focused on accommodations. He initially started out just blogging -- his site is Migrationology -- but then saw the growth potential of video.

"I knew video was only going to get more popular as the internet improved, so I committed to making videos on a regular, consistent basis," he says. "I especially love street food and showing the food and the atmosphere and a little bit of the cooking."

Entrepreneur spoke with Wiens about his content strategy and what he would advise people who want to get started with YouTube now.

I went to Arizona State University and graduated with a degree in global studies, with an emphasis on culture and art. But I really had no idea what I was going to do with that degree or with my life. I didn't really know what I was interested in, but I knew I loved cultures and traveling and global issues. So right after graduating in 2008, I set off. I traveled for almost a year before I pretty much ran out of money, but I didn't want to return to the States. I ended up teaching English for a year in South America. It was that year when I really started to blog a lot. I was going to attempt to make a living blogging or doing something online.

I was taking photos of everything that I would eat, and I was writing about the food. But then I wanted to start making videos, because I wanted to show more. You can look at a photo of food, but you can't see that much emotion, you can't feel the atmosphere. So I decided to just start making really short, really easy point-and-shoot videos of the food I was eating. It took me years to actually be able to earn a living, but I was able to live on a real serious budget living in Thailand, where the cost of living is much lower than in the United States, so that I could buy myself time to invest in online projects.

Were you always kind of an adventurous eater all your life?

Yes, actually, all the way from when I was a child. I grew up living in a variety of different countries. Both of my parents are American, but we lived in France, Democratic Republic of Congo and then Kenya until I graduated high school. So throughout my childhood, I was introduced to a lot of cultures. I got to sample a lot of food from the places that we lived or visited and during my middle school and high school years in Nairobi, Kenya, where I went to an international school. People at my school were from all over the world, and I would have friends who would bring in Korean or Ethiopian or Chilean food. That might have been a reason why I was so interested experiencing food from different countries. 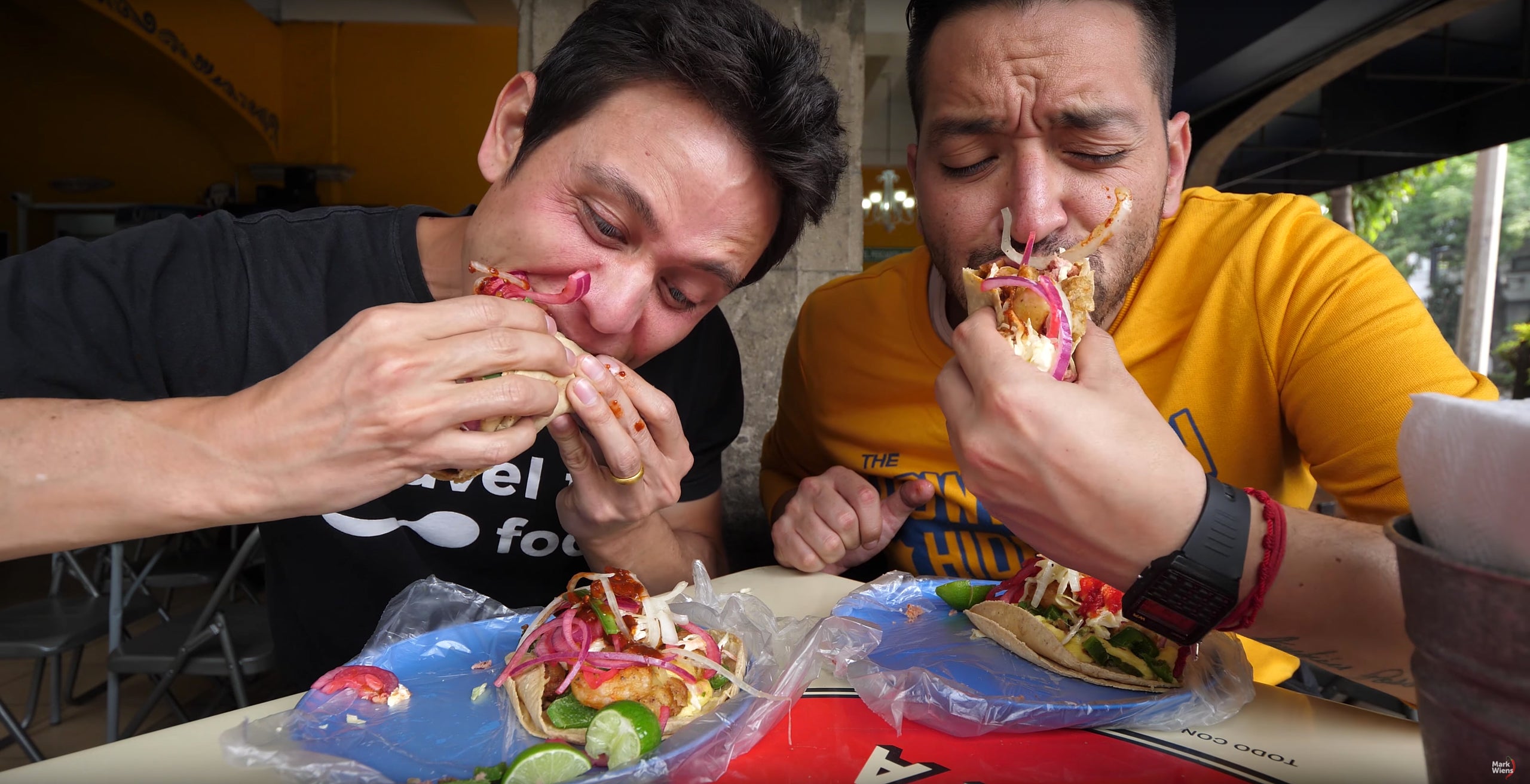 How much of your time do you spend on a video, and what does that entail?

Things have changed quite a lot now, but when I first started out, it was really just walking down the street and eating anything visible. But now that things have grown and progressed and I've also grown as a person, I do a lot more research. Also, now that I have a family and they come with me, it involves a lot more planning the whole trip. Usually I reach out on social media to people if they have any recommendations. I try to meet up with locals.

Compared to a real production, it's still very little planned. Once I come up with the idea, I want to just keep it random. I have a couple of common themes that I do: a full food tour plus sites and attractions in one video, then I like to do a home-cooking type of video.

Filming usually takes an entire day, and editing one single video probably takes 10 to 20 hours. Sometimes I can do it in one day if everything's going well and I can find the right music and all of the little things like that.

Related: What I Learned From Getting Ripped Off by a Bangkok Tailor

Back five or six years ago, I decided on two videos a week: Sunday and Wednesday night. At first it was a challenge, but I've stuck with it.

As for content strategy, things have been changing. You have to know your audience. But I try to plan videos that are not too similar next to each other -- mixing up the content. If you have a street-food tour, then next maybe have a village cooking video, then next possibly a higher-end-restaurant video. Every destination is unique, so sometimes you gotta go for something that's really popular that you know is going to perform well, that's famous. It's a combination of all of that. The strategy is a mix of keeping viewers entertained but also providing quality information in quality videos. I also really focus in on some of the unique foods and aspects of each destination.

How do you leverage your YouTube channels, and to what extent do you monetize them?

I include Google ads on all my videos, and that's still the biggest earner as of now. But I also have a couple products, some ebooks as well as T-shirts and caps that I sell. That's all linked to the videos. I occasionally have done some paid-for sponsorships, but not very often. Finally, some affiliate links, if it's something that I really use and recommend.

Another way I've leveraged it is because I started off as a blogger. So the website was the first thing I created. But videos go so well with a blog or with a website, because you can type up all that information in a blog post, then link it to your video. When you have your own website, you can have your products on it, so it can be a better marketing tool for actually selling product or affiliate commissions.

What advice do you have for other people who want to build brands on YouTube?

Looking at it from the algorithm standpoint right now, YouTube loves long content, but the number-one metric for ranking videos is watch time, which means the amount of minutes watched. So if two videos have the same title, for instance, the longer video, if it gets more watch time, will rank higher than a shorter video.

My recommendation is to create longer content, but it has to be very good content and has to be very engaging. That's the first part. The second part is to commit to publishing regularly, consistently, and to also be your own personality in your videos. People want me to review their travel videos, but it's just a series of beautiful landscapes with no story or personality. [You have to be] a host even if you don't think you're up for it. I never wanted to be a host. I still don't. I'm still learning. But you've got to try it. Then, there are all these side things, like following the trends and doing challenges and that stuff, which can be a boost.

Related: YouTube Star and 'The Older Sister of the Internet' Anna Akana Explains How She Found Her Honest Voice

My biggest misconception that I get all the time is that people think I don't have a real job or that I just have fun and eat all day long. I'm fully grateful for what I'm able to do, and I am having fun for sure. I post two videos per week, so that means two days of filming per week, but then the other four days of the week I'm probably sitting at my computer for 14 hours either editing or marketing or researching. That's the part that is not publicized. You're always thinking about it.

It takes a lot of work, it takes a lot of effort, but it is possible [to make it on YouTube]. Every person has a unique personality and unique ideas, so if you are someone with an idea and you want to make videos, the number-one thing to do is to just do it. A lot of people might make excuses about making videos, or publish one video and see that it doesn't do anything and then give up on it. But I'd encourage you to, if you believe in it, just go for it and keep doing it.

See below for Wiens's picks of five videos that he believes represents his brand.

"I've loved to eat all my life, but street food, because of the action and energy and being able to see the cooking before you eat it, has always fascinated me. In China, the giant portions, and the smells and colors, add to the delicious excitement."

"This restaurant is legendary, and I love to experience restaurants and street-food stalls that prepare unique recipes and dishes."

"One of my goals is to share authentic local culture through food. Having the opportunity to visit a Balinese palace to first watch the cooking, and then eat the traditional Balinese way, was special."

"There are few places in the world with as much significant history as Jerusalem, and having the chance to show the ancient city through its food was an honor."

"Again, there's nothing in the world I think that's more exciting than street food. This taco tour of Mexico City shows the variety of tacos available and how to truly have fun eating, while providing practical food information for those who want to eat at the same places."