By Gajendra Puri Goswami October 9, 2018
Opinions expressed by Entrepreneur contributors are their own.
You're reading Entrepreneur India, an international franchise of Entrepreneur Media.

Operating Systems (OS) are like relationships. It takes a while to commit to them, and it takes even longer to part with them. But if you ask 2018 Apple users, they’ll tell you that if adequate incentives are provided, relinquishing an old friend is not as hard as it sounds. Why otherwise, in a time when mobile phone users fear that their phones will run slower and have a weaker battery life if they integrate them with new updates, will 47 per cent Apple users update their devices to iOS12? Well, as we said, the compensations were bountiful and Apple users latched on to them without wasting any time. In fact, the results were so resounding that only three weeks after the new update was rolled out, analytics firm Mixpanel reported that there were more Apple devices running on iOS12 now than iOS11.

The adoption rate of Apple users to a new OS has always been better than Android users. However, in the case of iOS12 it grew profusely as Apple encouraged users to update their devices to iOS12 by offering an ameliorated performance, cooler features, and an exciting bunch of new emojis. It is worth noting that the adoption rate of iOS11 was 38.5 per cent in the same time frame as compared to iOS12’s 47 per cent. 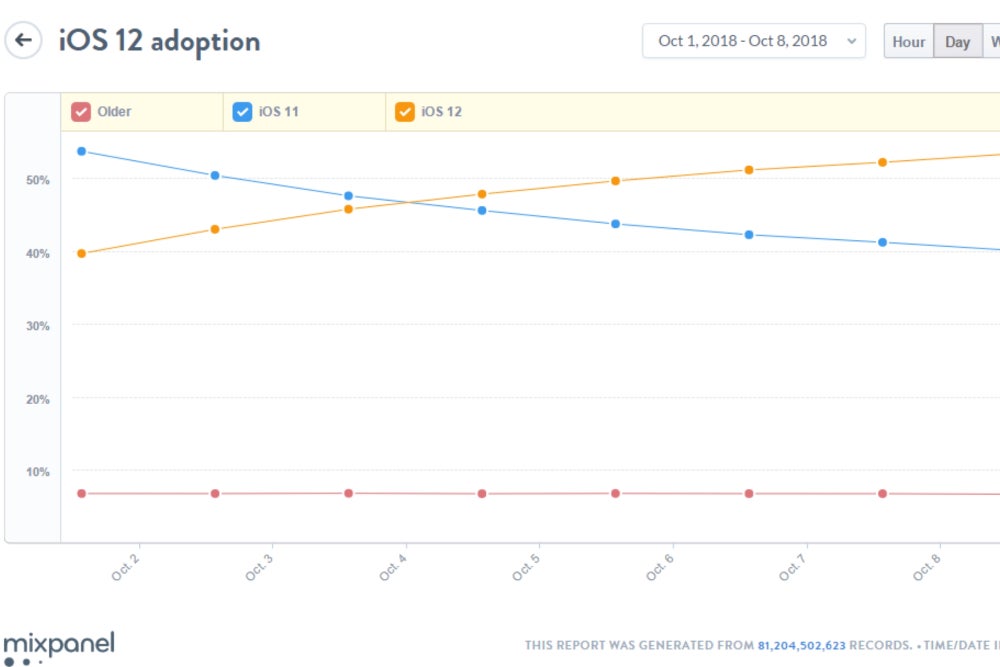 One of the major reasons for adopting iOS12 is that it enhances the overall user experience. Apple claims that the new iOS enable the devices to launch twice as fast as the iOS update. Many users claim that the camera launches 70 per cent faster and the keyboard appears to run 50 per cent faster with the new iOS. Another reason for the greater adoption rate of iOS12 is its of compatible devices runs longer than most iOS updates prior to this. The latest iOS is compatible with 12 Apple devices, including the iPad Air, and iPhone 5S. The company has introduced a bunch of optimisations to run the OS with even dated hardware as old as 2013. The company also started rolling out a beta version of iOS12.1 recently. The update fixes an issue that caused some iPhoneXS and iPhoneXS Max to not recognise when the lighting cable was plugged in. Additionally, the beta version also includes a group FaceTime feature and the depth-control feature that wasn’t included in the OS’ previous launches. The depth-control features allow the depth-of-field to be adjusted in real time while capturing a picture in portrait mode.

However, the report by Mixpanel will not be accounted as the final judgement on the resonance of iOS12 amongst users. Apple will soon roll out its own statistics, which are expected to be a little different. Yet, it seems like iOS12 is already a success. As more users update their devices to iOS12, iOS11 will continue losing its active user count and make the data even more appealing for Apple authorities.

Was there an iPhone Nano? An email from Steve Jobs responds to us