Medicus AI Raises AED11.5 Million In Its Ongoing Series A Round

Founded in Dubai in 2015, Medicus AI is an AI-based platform used by diagnostic labs and health insurance companies to provide patient-friendly health reports and foster continuous and personalized well-being coaching.

By Tamara Pupic February 4, 2019
Opinions expressed by Entrepreneur contributors are their own.
You're reading Entrepreneur Middle East, an international franchise of Entrepreneur Media.

Founded in Dubai in 2015, Medicus is an AI-based platform used by diagnostic labs and health insurance companies to provide patient-friendly health reports and foster continuous and personalized wellbeing coaching. Today, the company is based in Vienna, with offices in Berlin, Paris and Beirut, and is already revenue-generating, with EUR900,000 booked in its first year of commercialization, and with another EUR2.3 million worth of deals in the closing stage. Amongst its regional clients is Al Borg Medical Laboratories in Saudi Arabia.

The ongoing Series A round is led by Germany-based DieBrückenköpfe, with contributions from Atieh Capital, Biopart and others, and once completed, will be used to further fuel the company’s global expansion, as well as the development of the Medicus diagnostic lab and insurance products, across core markets and in new languages. To date, Medicus supports Arabic, German, French and English, with Italian, Chinese, Portuguese and Spanish in the pipeline for 2019. In addition to product development, Medicus will be focused on its distribution strategy in core markets. In late 2018, the company signed a market access cooperation with Roche Diagnostics which is expected to amplify its global reach with a few potential projects that are currently being explored in Asia and Mexico.

Dr Baher Al Hakim, founder and CEO, Medicus, explains that the diagnostic lab space, which makes up Medicus’ current core client base, generates approximately 20 billion reports worldwide annually, but that the labs operate in highly consolidated markets and struggle to differentiate themselves, cut costs, and introduce future-proof business models. “We empower labs to deliver defensible value-add services that augment their existing services,” Dr. Al Hakim adds. “We believe that lab directors only have a few years to decide how to react to the impending waves of innovation incrementally disrupting their industry as the industry is under severe pressure because of rising healthcare costs, and diagnostic spend is one of the easiest to squeeze. The market is really struggling under this pressure and regulations are becoming tighter and tighter. This is where Medicus comes in; through innovation we help labs build an attractive and integral service offering.”

When it comes to insurance providers, Medicus’ solution is aimed at cutting costs by targeting high-risk customers, then using the company’s proprietary method to give a detailed and granular view of a customer’s individual health situation, and finally working with them to transform their health awareness and coach them step by step towards better health, while also providing the insurance provider with anonymous and aggregate reporting of the customer’s health status improvements.

Dr. Al Hakim bootstrapped Medicus from its inception until August 2016 when he closed the company’s first pre-seed round from Dubai-based Audalion Ventures and Speedinvest, Atieh Capital and Vlady Varnier, all three from Europe.

In September 2016, Medicus was officially incorporated in Vienna, offering the team a strategic location to expand it geographically across Europe. “I knew then that to make it successful, Medicus would have to be in those markets, and learn from the market itself,” Dr. Al Hakim says. “I spent much of 2016 traveling, with a trip to Europe every month that allowed me the opportunity to learn what other markets were lacking and what opportunities we could harness as we looked to market Medicus to more people in more languages.”

However, Medicus is not the first company he started up in the UAE. Having moved to Dubai in 2005, Dr. Al Hakim founded CloudAppers in 2008, he says, adding that a few more followed, including an attempt to build a global company out of Dubai, the personal finance app Wally. “Being in Dubai and working here has contributed a great deal in my ability to think more globally," he says. "You interact and work with entrepreneurs and ambitious builders from all over the world and everyone brings different perspectives, experiences and stories, so even without necessarily leaving the city, you absorb a wealth of global learnings just from being here.”

When asked to compare the startups scenes in the UAE and Austria, he explains that the UAE’s advantage is in being a hub that allows businesses to achieve scalable operations. “Austria, on the other hand is not a hub, so geographic scalability is limited, and requires local presence in nearby countries to have a real impact,” he adds. “The most advantageous marked distinction we’ve observed in Europe is how scientifically impressive and IP-heavy the startup ecosystem is. Patents are common, and every startup we’ve come across in Vienna, across different verticals, has a few patents under their belts. There’s widespread public support for deep tech and scientific depth—we managed to leverage this to win three grants and are applying for a couple more. There is a focus on generating IP, and startups are really focused on building defensibility in this way.”

In conclusion, Dr. Al Hakim opines that the MENA region will remain an exciting startup ecosystem, especially if more early stage - pre-seed - capital becomes available to regional entrepreneurs. “While the investor ecosystem is becoming more sophisticated, the capital available to startups in their very early stages is still limited compared to the entrepreneurial activity. In Europe, what you see are entrepreneurs with great ideas, great IP, and a great team but no funding, yet they are able to tap into public money to fund and launch their startups in its very early stages. It’s not uncommon to hear of up to EUR 1million being available to a three- or four-person team to launch their product, and I’ve seen startups go from these very early seed stages, to fast growing companies valued at EUR20 million today. This kind of access to public funds at early stages, whether from grants or universities, can make a huge difference to the MENA startup ecosystem. In addition to that, there’s room for the encouragement of more deep-tech startups and IP creation to create intellectual wealth which is where real lasting value is created for an ecosystem.” 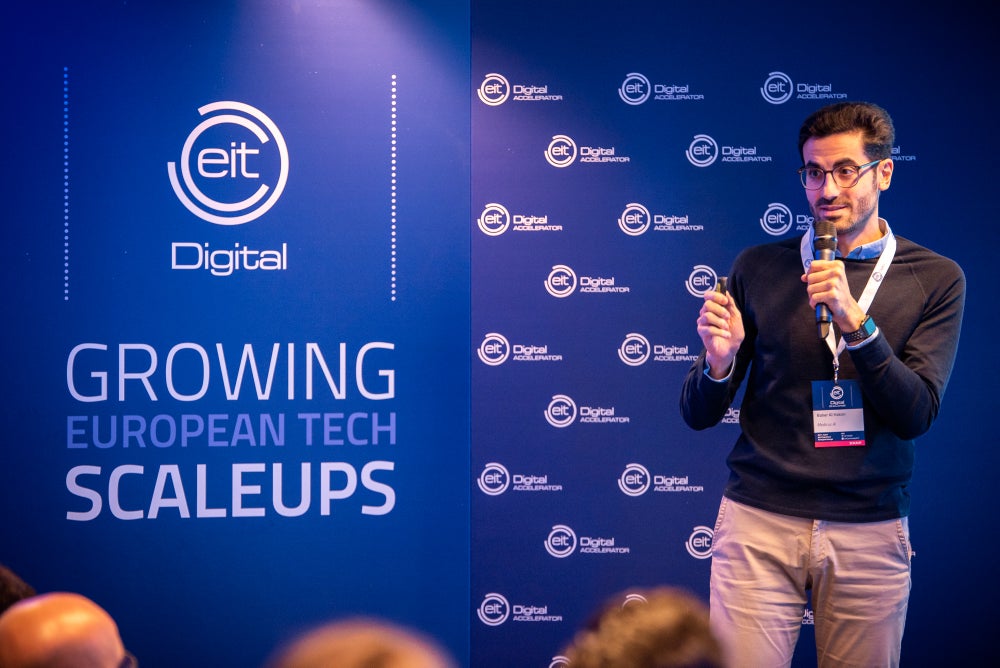 Run experiments and assess
Look at all of the company’s activities and investments like scientific experiments. Look at how much you’re investing, consider the returns, assess the evidence and then decide what to do next based on that - whether to invest further, iterate or kill the idea.

Be on the move and look beyond borders
Just because you’re in Dubai doesn’t mean your business or investors have to come only from Dubai. Be continuously on the move, travel a lot, go to events and conferences— connect with others. You can’t build a global business by staying in one place.

Look for the spark in people’s eyes
Whether it’s your investors or team, some people look great on paper, but don’t really have a passion for what you do. The investors that we noticed immediately being impressed with the business we’re building ended up being the ones that were most supportive. The investors looking at this as a commercial opportunity only ended up being the disappointing ones.

Invest in IP
Investing in our intellectual property is something that really helped us in establishing the right partnerships, such as that with Roche Diagnostics, and helped us really stand out in our industry. Filing patents, developing defensible tech and building something truly unique from a technology perspective is key.

Diversify your team
Half of our team is made up of women, and we truly believe that this helped shape the company’s product and culture in a way that is more fitting for our industry, product and market. From a multicultural point of view, this is also really important—the different cultural backgrounds can lead to a nice amalgamation of concepts. While sometimes they look like conflicts, they are the foundation of important and healthy discussions which support the company and products we are building by forcing us to look at all sides to make the best possible decisions. BONUS: Hire the best team wherever you find them. Exceptional hires may not want to move so make exceptions and embrace the idea of a remote team.

Related: Careem's Mudassir Sheikha And Magnus Olsson On What's Next For The MENA Unicorn

Say Hello to the Next Business Hub: Small Towns

We Got Funded: Egypt-Based Elmenus Raises US$10 Million In A Pre-Series C Round