By Mariella Moon February 6, 2019
This story originally appeared on Engadget

If you visit Model 3's "Design Your Car" page, you'll notice that it looks a bit more affordable than before. Tesla has lowered its price across versions by $1,100, so you can now get the mid-range battery option for $42,900 before incentives. Meanwhile, the car's long-range version now costs $49,900, while the performance option will set you back $60,900 before savings. Elon Musk said that means Model 3 now has a starting price of $35,000, though that's after you apply tax credits and fuel savings -- you'll have to wait a bit more for a Tesla car with a $35,000 base price. "We're doing everything we can to get there," Musk tweeted. "It's a super hard grind." 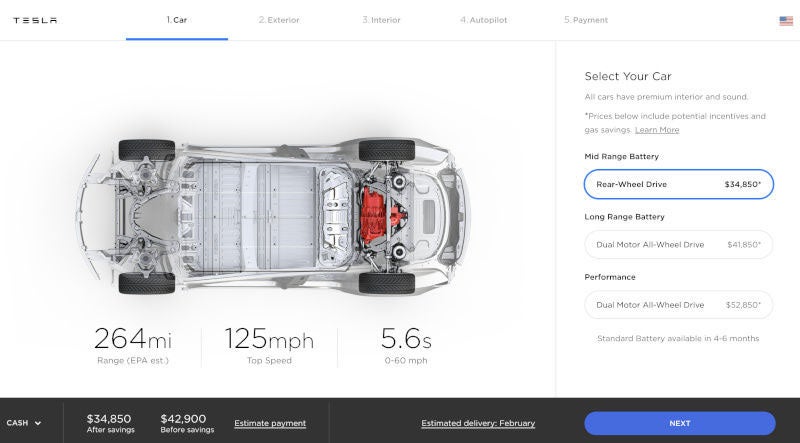 A spokesperson told Electrek that the price decrease was enabled by the cancellation of the "referral program, which cost far more than [the company] realized." The automaker's referral scheme allowed Tesla owners to give five friends six months of free Supercharging with the purchase of a new vehicle. Apparently, the free charging and other benefits drove up costs too much, compelling the company to end the program on February 1st.

This the second time Tesla slashed Model 3's prices since its federal EV tax credit has been cut in half. In January, it took $2,000 off the prices of all its vehicles to offset the new reduced tax incentives.

Mariella Moon is an associate editor at Engadget.

Agency Determines Driver Was Operating Tesla That Crashed in Spring

What did Elon Musk say to Marcelo Ebrard? The Mexican foreign minister received a call from the CEO of Tesla