Android users who bought the Nike Adapt BB are taking to the Google Play Store to complain. 'Broke my $350 shoes with a Nike update,' reads one review.

By Michael Kan February 21, 2019
This story originally appeared on PCMag

Android users who bought the Nike Adapt BB are taking to the Google Play Store to complain. "Right shoe won't connect after update and battery dies within a couple of hours," reads one review for the Nike Adapt app, which connects to the shoe.

"Broke my $350 shoes with a Nike update," reads another review. 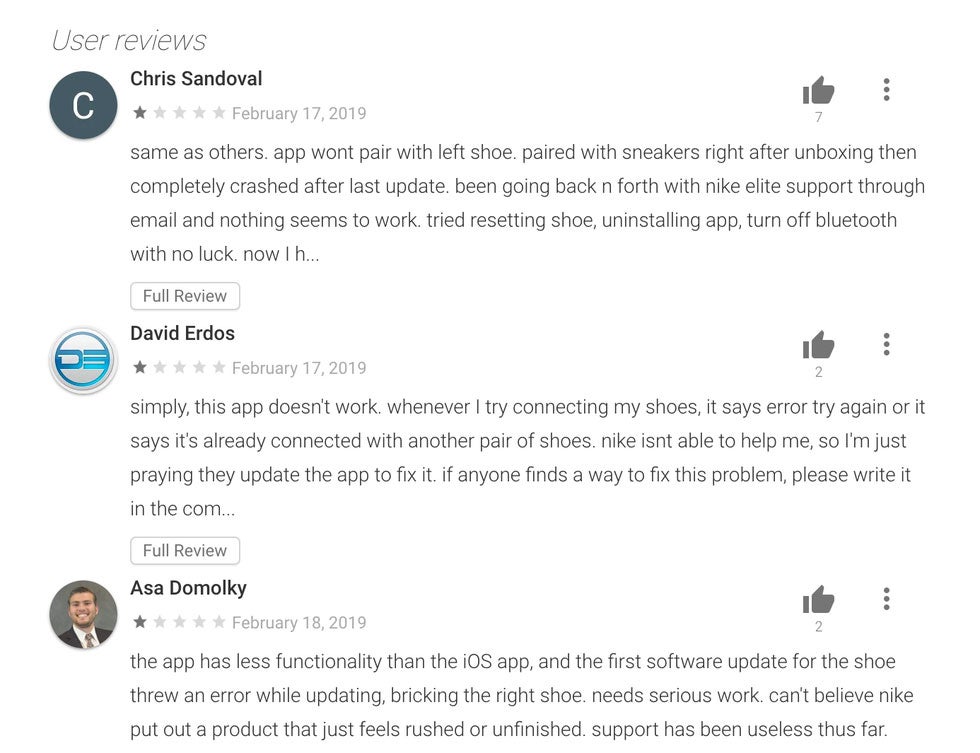 It isn't clear how widespread the problem is for Android users; currently, Google Play shows 18 largely poor reviews for the app, all related to the update issues. But those appeared right after the shoes launched over the weekend.

Nike didn't immediately respond to a request for comment. However, the firmware update problems don't appear to affect the iOS version of the Nike Adapt app, which has mostly positive reviews.

The Nike Adapt BBs have generated hype for the footwear's self-lacing system. Each sneaker can sense your foot's measurements and automatically tighten around it as you play a game of basketball for a perfect fit. To do that, this so-called "power lacing" system needs the Nike Adapt app and battery power. Nike plans to issue routine firmware updates to support its cutting-edge basketball shoes, though the updates are intended to be opt-in, Nike said last month.

Despite the faulty update, owners can still wear the Nike Adapt BBs without the app, but they'll just be regular sneakers. To fix the problem, users are reporting you can try initiating a factory reset. One owner managed to resolve the issues by activating the shoes using his wife's iPhone.

And in this corner: Nike! Launch a collection of tennis inspired by Lucha Libre

Vanessa Bryant Calls Out Nike for Early Release of Sneakers: 'NOT Approved For Sale'