Nykaa has changed the way India shops for beauty 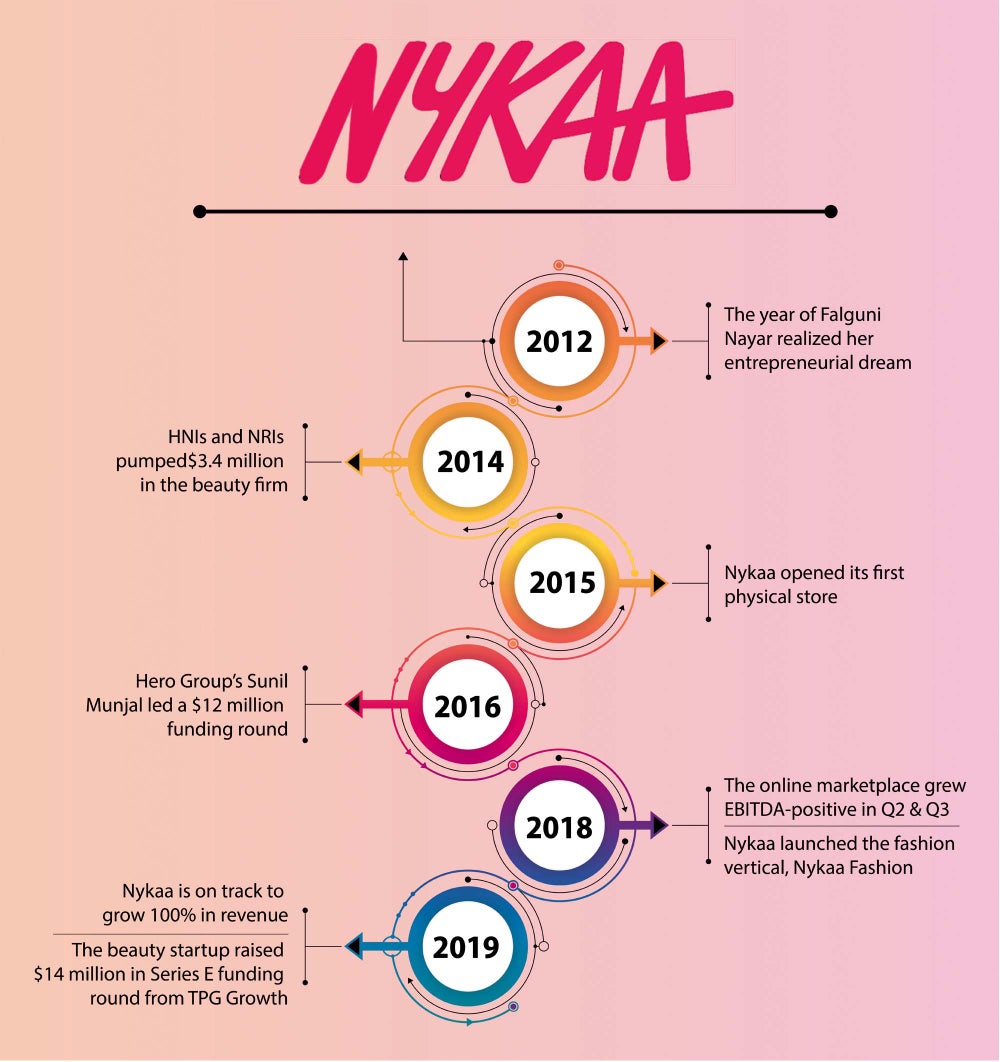 What was the entrepreneurial dream of former managing Director Of Kotak Mahindra Capital Company, Falguni Nayar is well on its way to become India’s next billion-dollar startup. 10 years ago, who could have thought that buying cosmetics online would become a custom but Nykaa changed the demographics when it entered the market in 2012.

Changing the way India shops for beauty was not an easy task but Nayar took up the challenge and came on top. Cashing in the strategy to ‘celebrate women’, Nykaa has been EBITDA-positive in the last two quarters (Q2 and Q3) of 2018 and has plans to grow 100 per cent revenue in FY19. The recent funding by American private equity firm TPG Growth has taken its valuation to $724 million.

Let’s have a quick look at how this online beauty marketplace became a soonicorn:

2012 – Having led India’s leading investment bank for years, Falguni Nayar received many accolades through her career but it was not until the digital wave took over that she decided to realize her entrepreneurial dream by launching Nykaa and her mantra to success has been “retail is all about detail” and that is what she often propagates.

2014 – Following the initial days of struggle, a consortium of influential Indian investors pumped in $3.2 million into the brand, fusing a new air of confidence into the beauty firm. With the expectations to achieve 10X growth in the next year, Nykaa took strategic steps to straddle the online and offline space in beauty and e-commerce industry through the capital raised.

2015 – Putting the plans of past years into action, Nykaa opened its first physical store in Delhi. Since 2015, the company has opened 35 stores across 15 cities in two formats Nykaa Luxe and Nykaa On Trend. The year also brought a $9 million cheque from TVS Capital, Techpro Ventures & Others investors, further fuelling the expansion plans.

2016 – As the company grew in stake and size, it caught the eye of major players. Hero Group’s Sunil Munjal was among the investors who acknowledged the brand’s potential by leading a $12 million funding round followed by Max Ventures, part of industrialist Analjit Singh’s Max Group which pumped in an estimated INR 16 crore into the brand.

2018 – While 2017 was more or less a year of rest from the finance point of view, the online marketplace turned the next one as a crucial year for them. Not only did the brand grew EBITDA-positive in Q2 & Q3, it also launched a fashion vertical, Nykaa Fashion. The brand was on an expansion spree with the launch of NykaaNetwork, NykaaDesignStudio and NykaaMan.

From funding front too, the year was exemplary for the beauty brand.  The brand raised $24 million in Series D funding and also got a minority stake in Lighthouse India Fund III Limited through a secondary investment of INR 113 crore. The funding made a way for TVS Capital Funds’ exit at over 4 times of initial investment.

2019 - Nykaa is on track to grow 100 per cent in revenue, potentially taking it beyond the $140 million. With over 40 million monthly viewers, the website offers over 1,000 brands & 100,000 products. The beauty startup raised $14 million from an American private equity firm TPG Growth, taking the company’s total funding to $93.02 million till date.