Matthew Buckland didn't know exactly what he was going to do when he resigned. He knew that the best way to find his business was by getting into the market and figuring it out.

By Matthew Buckland July 26, 2019
Opinions expressed by Entrepreneur contributors are their own.
You're reading Entrepreneur South Africa, an international franchise of Entrepreneur Media.

It was at another Naspers event that I finally decided it was time to go on my own. Myriad International Holdings (MIH), the investment arm of Naspers, invited all the company’s entrepreneurs it had invested in all over the world to a conference at Cape Town’s Waterfront.

The attendees came mostly from emerging market countries such as Brazil, Vietnam, Malaysia, India and China to present their ecommerce businesses.

The room was electric with energy and I remember feeling like a ‘square’ employee who didn’t fit with the other participants.

As I listened to each presentation and story, I became increasingly jealous and desperately wanted to be like those entrepreneurs – people who had created something, who owned something, and who were in control of their own destiny.

I furiously scribbled notes planning my exit and my thoughts on what I would do next.

Taking the leap or dipping a toe?

So, it was time to jump – and I mean jump in the lightest possible sense of the word. To be honest, I was somewhat of a ‘chicken’ entrepreneur.

Related: If You Choose To Start A Business, Make Sure It's Right For You

I was jumping all right, but I would be landing on soft cushioning. I was already in control of some of the variables: I wasn’t exactly heading out into the unchartered unknown, because I already had the semblance of a company to move into.

I had hedged for about five years before that, setting up a moonlighting venture where I was slowly but surely building confidence and an understanding of what needed to be done to get the business going.

It was this company, started as a sideline moonlighting gig, that I would eventually build up as Creative Spark and sell five years later to a listed UK conglomerate.

Related: 7 South African Self-Made Millionaires Who Started With Nothing

Importantly, the venture was complementary rather than competitive with the corporate work I did. My bosses allowed me to pursue it because I promised them full transparency and the work I did for them was never in question.

It’s never a good idea to duck and dive – that’s simply unethical. If you are good at what you do, a hard worker and an entrepreneurial type of employee, chances are your boss will begrudgingly accept the fact that you have a side business or two. Be honest and transparent if you do, and that will build trust. 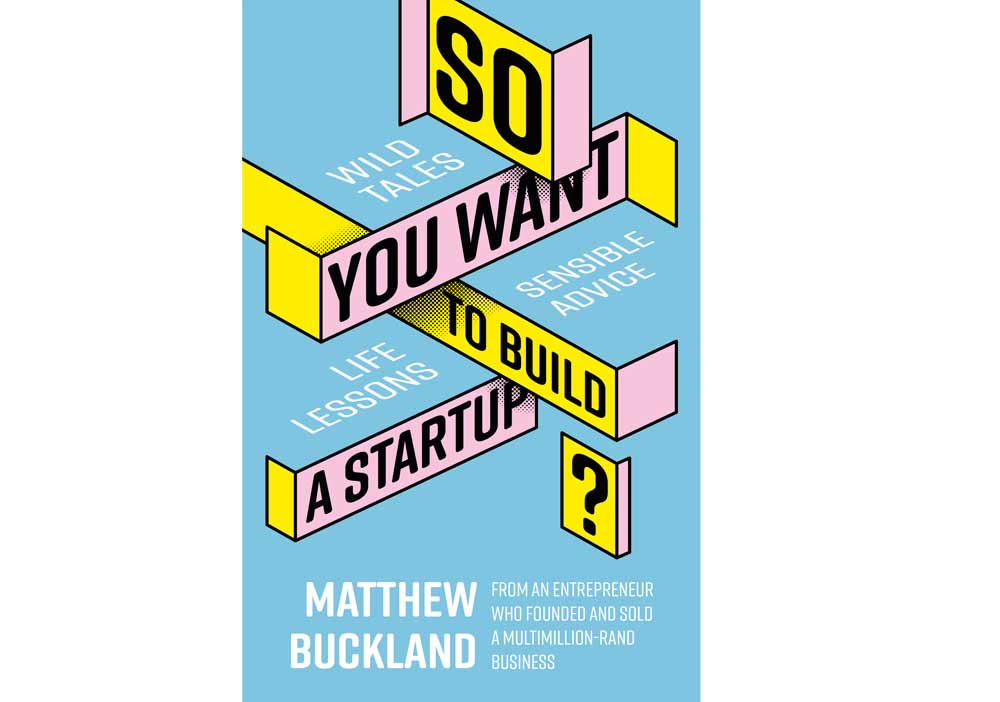 I had recently hired two employees for my company, and put them in temporary offices. When I told JP, he didn’t fuss about this. It was that move that pulled me closer towards my budding start-up, and away from Naspers.

The very next day after the MIH conference, I handed in my resignation. I said my goodbyes to Koos, who, to my surprise immediately responded to my mail and wished me well. JP ensured that 24.com issued a press release thanking me and announcing the new start-up. It was a great head start, and I was very grateful for it.

At some point during my last few months at Naspers, I had accepted an invitation to a ‘travelling geeks’ event in Paris: the brilliant LeWeb tech conference, an annual event attended by tech heavyweights and digital innovators from around the world.

Related: Why You Need To Be In The Startup Game To Win It

Together we toured the start-up scene in Paris. I’ll never forget renowned blogger Robert Scoble, who was in our party, losing his temper and going on a rant at a young French start-up founder because the company didn’t have a Twitter account.

It was quite a distasteful thing to witness, especially coming from an international blogger kingpin whom I respected.

During that trip I gave some thought to the media division of my new company. Scouring the web for available dot.com domain names, I eventually came across a blog written by a New York advertising agency man complaining about how the Internet continually throws up new names and phrases, or what he called the constant ‘meme burn’.

Instantly I knew that was the name I was looking for. The domain was available, and I booked it. The new online media business would be called Memeburn.com. I started coding the site. Vincent did me a favour and created the logo for me, which remains in place to this day.

At that stage I didn’t have a solid idea of what Creative Spark and Memeburn would be. I knew I wanted to build a publishing outfit focused on technology disruption and a digital agency doing development and design of websites and apps, as well as social media management.

I reasoned that Memeburn would be a showcase for the agency of digital content marketing with a journalism bent, done right.

Memeburn, as a publisher focused on writing about the latest digital innovations, would put the agency in a thought-leadership position in the industry, and differentiate it from the other digital agencies out there.

It may surprise you to learn that I hadn’t created a written business plan. In my view, business plans are made to make your boss or investors feel secure.

The plans are also there to align with those of your partners. Since I had neither bosses nor partners to start off with, I decided that what was in my head was good enough.

I had learned from interacting with start-ups and entrepreneurs that it’s okay to start with a relatively vague idea of what you want your business to be.

In the vast majority of cases, the real shaping of a business idea actually takes place in the execution of that idea, or when that idea is applied to the real world. The reality is that the ‘big idea’ comes into being only when we start working with it.

​​​​​​​Related: These Local Entrepreneurs Successfully Bootstrapped Their Start-Up When They Couldn't Secure Funding

It’s more important to roll up your sleeves and start executing, even when that idea is imperfect or not fully formed, because we become experts in something only by being immersed in it.

Most start-ups are not based on one idea or a single eureka moment, but are the result of thousands of intertwined micro-decisions and micro-ideas, evolved over time.

Of course, entrepreneurs should have a broad sense of what direction they want to take, but the reality is that their businesses take shape in the process of doing, not dreaming.

Doing over dreaming and the reality of pivots

Sometimes the original idea ceases to exist altogether and pivots into something else completely. There are many famous examples of tech businesses that have shifted in this way.

Twitter began as Odeo, a podcast platform, and only later pivoted to what we now know today as the hugely popular micro-blogging service Twitter. The service’s 140-character limit was originally based on the notion that tweets were to be SMS-based, which restricted the number of characters.

YouTube started off as a video dating site with the slogan ‘Tune in, Hook up’. That idea never quite took off, and the founders soon realised that user-generated content of everyday life was the way to hook viewers.

Instagram started off as Burbn, a confusing hybrid checkin gaming app. The founders eventually focused on photo sharing – which led to the wildly successful Instagram we know today.

Shopify was intended to be an online store called Snowdevil that sold snowboards. The ecommerce software behind that online store became the primary business, and today Shopify is the engine of more than half a million online storefronts.

Groupon started off as a site called The Point to rally people behind social and charitable causes. Groupon was at first a mere feature of that site but then became the main business, linking subscribers with local merchants through discounts based on group buying. Today Groupon is one of the world’s most successful ecommerce marketplaces.

The main focus of the company behind Slack, the world-famous online communication and collaboration tool, was online gaming. The company abandoned gaming to focus on the part of their business we know today as Slack, offering tools and services for workplace collaboration, and now boasting 8 million daily active users and 3 million paid users.

Airbnb, originally airbedandbreakfast.com, was first envisaged as a business that would rent out air mattresses and shared spaces for short-term living. It evolved into the $38 billion company we know today that offers lodging and tourism experiences worldwide.

Netflix never set out to be a worldwide streaming company. The original business model involved DVD sales and rental by mail.

PayPal was conceived to allow people to beam payments from their personal digital assistants (PDAs) and only later moved into what became its core business, online payments.

Both Google and Facebook did not set out to be online advertising platforms, but they became that as their business models evolved.

​​​​​​​Related: Why You Need to Start With Your Why to Build a Business That Matters

The lesson here is that there is no perfectionism in entrepreneurship.

Get started, even if your idea is not fully formed or you still have doubts. This is especially the case in the Internet age, where technology changes quickly.

So, with a vague idea of the new business I wanted to create, no business plan to back it up and no proper offices, I stepped out into the unknown and embarked on a journey so few have travelled on: living the dream of building my own business in the tech sector.

The move was the culmination of seven years of planning and building up confidence, first with a moonlighting gig on the side. Now there would be no more hedging or pretending I was an entrepreneur. This was it.

This edited extract is taken from So You Want To Build a Startup by Matthew Buckland, published by Tafelberg and retailing for R295.

Matthew Buckland was a South African Internet Entrepreneur and businessman who founded and exited digital agency and publisher Creative Spark, acquired in 2015 by UK firm M&C Saatchi PLC. He was also the founder of Burn Media, a suite of technology publishing brands which includes Memeburn, Ventureburn.com, Gearburn.com and others. He is the author of So You Want To Build A Startup?

Harnessing the Power of Fear

Be Authentic This Women's Month