How the Clean Energy Fuels Alternatives Are Affecting the Diesel Market

By Prasan Surana August 11, 2019
Opinions expressed by Entrepreneur contributors are their own.
You're reading Entrepreneur India, an international franchise of Entrepreneur Media.

Diesel, in India, is used to power almost anything. From Vehicles to Construction Equipment, from Machinery to Power Generation, our economy is hugely dependent on Diesel. The same can be understood from the fact that in 2018-19, the world’s third-largest oil consumer guzzled a total of approx. 83.5 Million Metric Tonnes (MMT) of Diesel, while this year the consumption is going to touch approx. 86 MMT. Out of this, approximately 26% of fuel is consumed by Non-Transport Sector such as Power Generation, Agriculture & Mobile Towers. 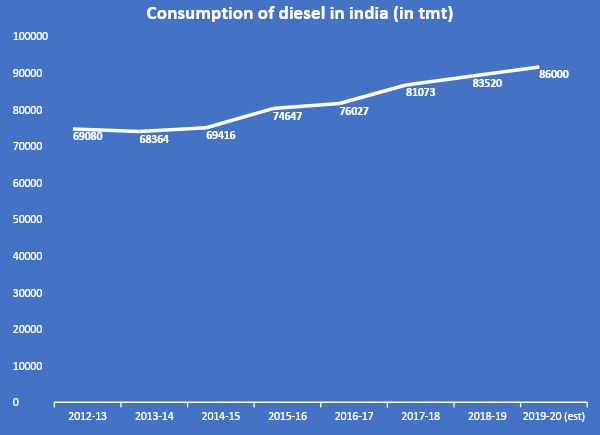 While there has been a steady decline in the demand for oil in other top oil-consuming nations of the world – The USA and China, demand in India has continued to grow. The main reason for this is the slew of infrastructure projects, fancy for automobiles and dearth of grid available power.

India is almost entirely dependent on crude imports to meet its fuel demands. But the consumption of oil at such a significant pace poses many threats:

First, the crude available for import is majorly sourced from the middle east. The steady consumption has led to a depletion in world oil reserves. BP’s annual report on proved global oil reserves says that as of the end of 2013, Earth has nearly 1.688 trillion barrels of crude, which will last 53.3 years at current rates of extraction. The contention is though debatable, as the exact reserves of crude levels cannot be predicted accurately.

The numbers are even more frightening for trucks and diesel guzzling gensets. With the AQI regularly crossing very unhealthy & hazardous levels in NCR, NGT and EPCA have come upon their recommendations of banning the use of gensets and other particulate emitting fuels in manufacturing units. Also, govt is seriously considering preponing the BS VI conforming fuel deployment in NCR by 2 years, and banning the use of all high Sulphur emitting fuel like Pet Coke and FO from manufacturing units in NCR.

High resilience on fossil fuels and imported crude is hurting the economy badly which has also led the government on targeting to cut crude imports by at least 10% by 2022. The increased focus of current government on renewable and alternate sources of energy has led to key policy changes, paving the way for entrepreneurs to go out and explore the uncharted territories.

Based on the above factors, it is easily understood that there is an increased necessity to look for other alternatives of Fossil Diesel, which can be used in the existing ecosystem.

Biodiesel is an environmentally friendly fuel, which has almost no Sulphur, no aromatics, and has about 10% built in oxygen. It can be manufactured from a variety of feedstocks abundantly available in India. The main feedstock used for manufacturing Biodiesel are Tallow, Used cooking Oil. Acid Oils, Crude Palm Oil etc. Distilled Grade Biodiesel can be used as an alternative to Regular Diesel in existing Stationary diesel engines. No modification is required on the engines to switch over from Diesel to Distilled Biodiesel and can be used as a complete substitute or in any ratio of blending with regular diesel. However, for use in transportation a blend of B75 (75% Distilled Biodiesel, 25% Petroleum diesel) is generally recommended to get comparable output. It is extremely environment friendly, cheaper and lot better fuel than regular diesel. The fuel is Euro VI compliant.

It is to be understood that only distilled grade high quality biodiesel is fit to replace diesel in existing engines. Elsewhere, un-distilled biodiesel can only be used in small proportionate blends with Diesel. Biodiesel needs no separate infrastructure for storage. It is very safe to handle because of its higher flash point compared to petroleum diesel. Burning of biodiesel results in reduction of unburnt hydrocarbons, Carbon monoxide (>80% reduction), NOx (>26% reduction) and Particulate Emissions (>24% reduction).

Historically, the diesel engines were particularly designed to run on Biodiesel only (peanut oil). But at that point in time, petroleum diesel was easily available and was also very cheap, compared to grow and use edible/inedible vegetable oil based Biodiesel. Hence it could not become popular. The retailing permission of Pure Biodiesel in India came only in 2017. This amalgamated with the consistent rise in the price of diesel has given consumers an alternate of diesel. Biodiesel in India today retails at atleast Rs 4.00 – Rs 5.00 per litre cheaper than existing Retail selling Price of Petroleum Diesel. 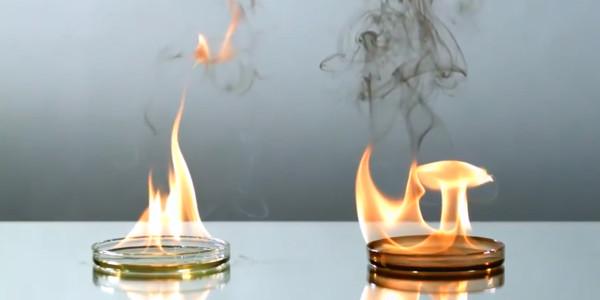 There are Fully Automated app based refueling service that comes to the location of the stationary equipment and delivers Distilled grade Biodiesel directly into it – on demand when the consumer needs it. It eliminates the need to store bulk fuel on site and all the problems with self-transporting & fueling the machinery. Now customers, just by sitting at their office from a simple phone call or click/tap from their fingers, can order for Biodiesel and it can be delivered to their premises in a fully automated mechanism and most transparent way.

The availability of Biodiesel, when combined with Fully Automated On-Site Delivery Services can lead to path breaking transformations in the Fuel Retailing Industry. Not only will the users have an option of getting assured door delivery of a fuel which is Cleaner, Cost Effective and better, the social impact is also immense, as the fuel will strengthen the Farming & Agriculture sector and will open doors to thousands of direct and indirect job opportunities. The self-sustained production of Biodiesel is also in line with the government’s campaign of “Make in India”, "Green India" and can play huge role in cutting import crude oil bills.