After Disrupting the Telecom Market, Jio is Ready with its Broadband Offering

3 years after the launch of its mobile services, Reliance Jio is back with its wired broadband service

Nearly three years after disrupting the Indian telecom industry with the launch of its mobile services that offered below-cost tariffs, Reliance Jio is back with its wired broadband service, JioFiber across 1,600 cities in the country. Jio’s tariffs are lower than that of others but switching wired broadband connections is not as easy as changing mobile network.

Unlike mobile services, tariffs in Jio’s wired broadband offering are not seen as a major disruptor by the experts. Starting with the basic monthly plan for INR 699 and 100 GB (plus 50 GB of promotional data) at 100 Mbps speed, Jio’s tariff plans go up to INR 8,499 at 1 Gbps. Bharti’s tariffs start from INR 799 per month and go up to INR 1,999 with speed limits ranging around 40-300 Mbps.

JioFiber also offers free voice calls, video conferencing through a compatible TV, high-speed gaming and content sharing across the home network. As an effective counter to Jio’s attractive offerings, Bharti Airtel recently upped its package with the launch of Airtel Xstream, which is a unified entertainment services platform.

Bharti Airtel also provides free subscription of popular OTT players such as Amazon Prime and Netflix. The downside of JioFiber would be customers having to buy compatible devices for using services such as gaming, home networking and virtual reality. Experts believe that JioFiber will be disruptive only if the JioTV content comes bundled with the broadband. 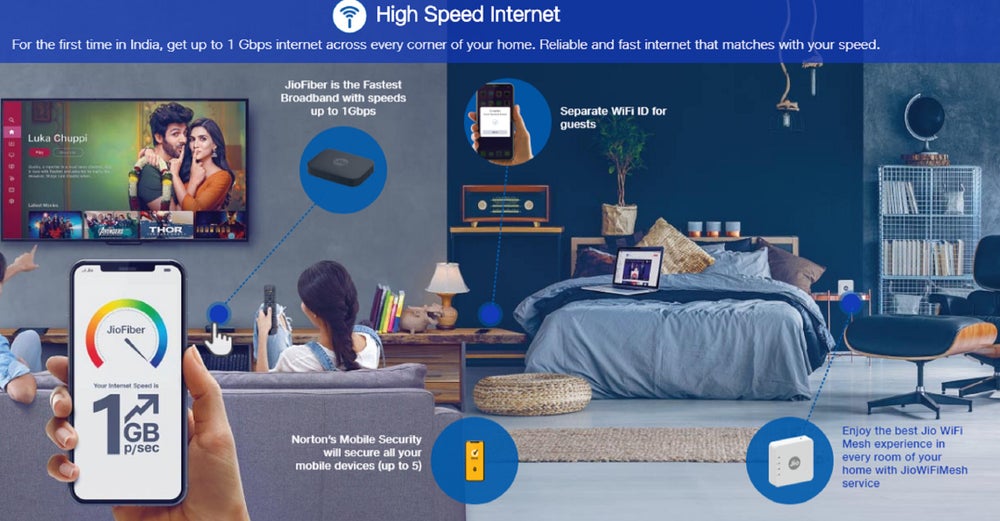 RJio has received over 15 million registrations from nearly 1,600 towns but has the target to reach 20 million residences and 15 million business establishments in the next 12 months. Considering Bharti has a presence in only 99 cities but in limited areas, Jio’s plans are ambitious, to say the least.

So far, the wired broadband market has been dominated by small wired broadband providers with not much competition by bigger players. With JioFiber, the competition is about to heat up. However, whether Jio would be able to replicate the success of Jio telecom is another question.

Speaking on JioFiber, Akash Ambani, Director, Reliance Jio Infocomm said, “The launch of JioFiber, with its revolutionary services is just the beginning of a new and exciting journey. As always, we will continue working hard to bring more such amazing services to your home and take Jio Fiber to the next level”.

While launching its services, Reliance Jio Infocomm offered telecom services for free to users for a year. Even after a year, data tariff was nearly 30 per cent lower than competitors. The disruptive price point helped Jio draw as much as 30 per cent of the market share from rivals, as of March 2019. Despite being the youngest player to enter the telecom game, Jio is the only profitable mobile services provider today.

New York Caps the Cost of Broadband for Low-Income Families