Indian foodtech unicorn, Zomato, has been experiencing some highs and lows over the last few months
Next Article Add to Queue

Indian foodtech unicorn, Zomato, has been experiencing some highs and lows over the last few months. Here are some of them.

Swiggy might be the bigger player in the market but when it comes to winning hearts, Zomato has been the leader. 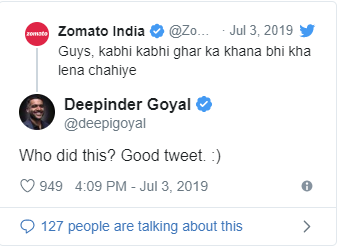 Zomato’s parental policy for both men and women is an instant hit proving to be a win-win for the company. It was seen as a revolutionary step taken by a startup. The foodtech unicorn announced that it is offering 26 weeks of paid leave to parents including the non-birthing partners and $1000 to be offered per child on the onset of the moment when couples start a new life with their child.

Deepinder Goyal, co-founder and CEO of Zomato, posted on a blog, “For women across the globe (we have teams in 13 countries as we speak), we will be offering 26 weeks paid leave, or will follow the government mandated policy, whichever is more. We will be offering exactly the same benefits to men as well. There won’t be even an iota of difference in parental leave policy for men and women at Zomato going forward.”

He further added, “These policy changes are applicable to even those Zomans who have had a child within the last 6 months.”

Though one may feel that India has progressed and is gradually moving towards an egalitarian society, a few incidents force one to think otherwise.

Zomato’s customer named Amit Shukla cancelled an order because the food was slated to be delivered by a non-Hindu rider. The company refused to change the driver or cancel the order as the request was based on the foundations of discrimination. In response to this baffling request, Zomato tweeted, “Food doesn't have a religion. It is a religion.”

Stepping into the crisis yet again, Goel posted something that won Zomato several accolades for its commitment towards upholding strong values, “We are proud of the idea of India - and the diversity of our esteemed customers and partners. We aren't sorry to lose any business that comes in the way of our values”

YouGov’s BrandIndex that monitors how media and news events impact consumer’s brand perception and purchase behaviors reported that Zomato saw a fall of 6.8 points, from 42.7 at the beginning of July to 35.9 in August end. 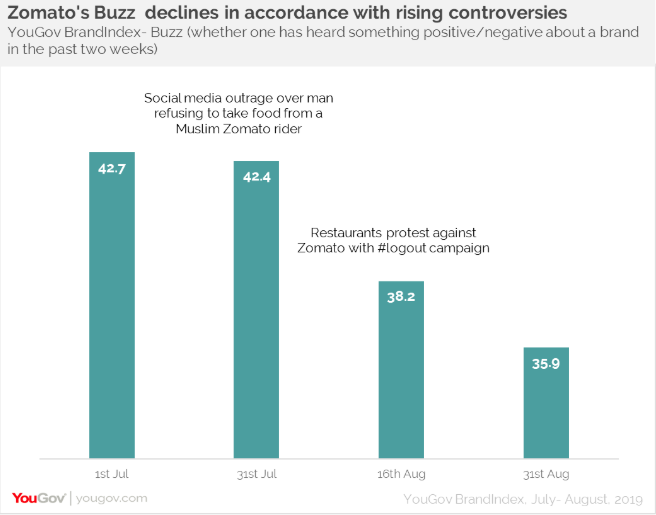 Angered by the deep discounting disadvantages restaurants were facing, over 300 of them started a #LogoutCampaign under the National Restaurant Association of India (NRAI) and delisted themselves from foodtech platforms such as Zomato Gold, NearBuy, EazyDinner, MagicPin etc. This hit Zomato’s reputation and took a toll on its customer numbers.

In August, Zomato laid-off 40 people from its customer support, a number that increased to 540 employees from its Gurugram office, a total of 10 per cent of its workforce according to a company statement.

The company also fired employees across customer, delivery and merchant support segments. The company ensured that enough compensation is provided to the employees, including severance for two to four months.

To add to Zomato’s woes, the company’s Infinity Dining programme annoyed many restaurant partners who revolted via the industry body NRAI. Zomato finally had to call the programme off, a move that came after protests from partner restaurants against the "deep and unsustainable" discounting expected out of the programme.