In the midst of the vaping crisis, marijuana consumers are finding new alternatives like edibles to use instead.

The vaping health crisis apparently has been good for the marijuana edibles sector, a sign that consumers are funneling more money into infused products instead of vaporizers.

Since the first vape-related death was reported in August, retail sales of edibles have climbed steadily in four states while those of vaping products have declined, though the vaporizer market appears to be stabilizing -- and even rising -- in all but Washington. 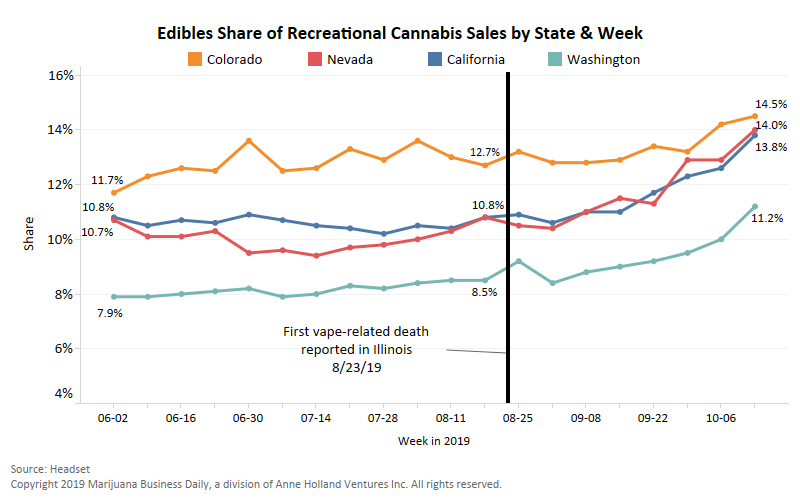 And while edibles manufacturers say they’re not seeing a dramatic impact on sales yet, marijuana retailers are reporting that sales of infused products are up since the beginning of the vaping health scare that has sickened more than 1,600 people and killed about three dozen in 49 states, the District of Columbia and the U.S. Virgin Islands.

According to data provided by Seattle-based Headset, the share of cannabis sales captured by edibles has increased steadily through Oct. 6 since the first vaping death was reported Aug. 23:

During the week of Oct. 13 alone, Manzanita Naturals landed six new retail accounts, which will bump monthly sales up by about $30,000, said Andrew Amend, CEO of the San Francisco-based maker of all-natural, THC-infused craft sodas.

“People are starting to wake up and ask questions about what’s in their product,” Amend said. “Stores in San Francisco are dumping their vape cartridges and preparing for a ban and talking to me about beverages now.”

Denver-based Binske, which makes both edibles and vape pens, is ramping up production of its edibles products -- even though it hasn’t yet noticed an increase in demand.

“Customers are starting to ask more questions and be more concerned about the products,” said Alex Pasternack, Binske’s executive vice president. “But the trickle-down effect hasn’t gotten to the brands yet.”

Meanwhile, sales of vape products in the same four markets have shown a marked decline since Aug. 23, though they appear to be back on the rise in California and Nevada. 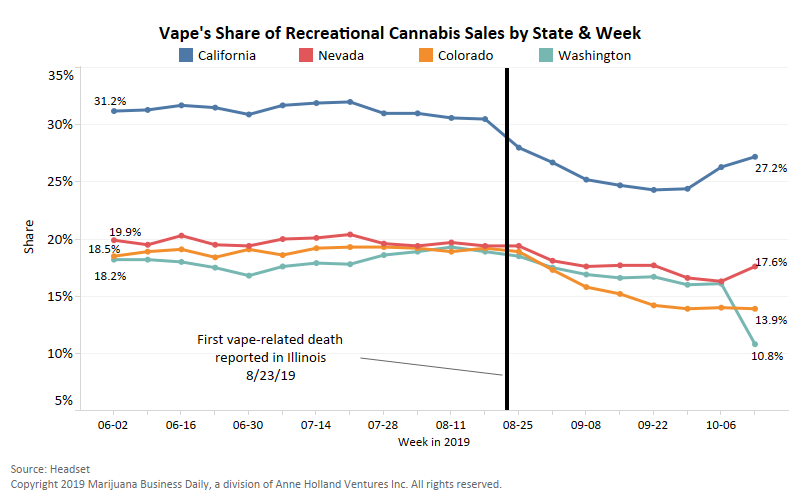 Sales of Coda Signature’s edibles have risen, but it’s difficult to say whether that is tied to the vaping health scare because the company’s sales have increased every month since it launched in 2015.

The company, based in Denver and Trinidad, Colorado, recently launched in California, where 105 dispensaries signed up to sell its products within 45 days of entering the market Sept. 9 -- just 18 days after the first vape death was reported. Coda products are available at 630 Colorado retailers.

Grindeland worries that the vape health scare will perpetuate the stigma the cannabis industry is striving to overcome as people further question the safety of marijuana products.

“As we look at vapes, everybody in the industry should be concerned,” Grindeland said.

RELATED: What Top Cannabis Brands Are Saying About Counterfeit Products

Andy Singh, founder and CEO of Los Angeles-based vaporizer company Nuvata, said sales have been stagnant in the roughly 20 stores where the company’s pens are sold.

Still, the company is striving to increase its footprint and anticipates its products being sold by at least 40 retailers by the end of the year.

“We continue to educate consumers and not allow them to associate the regulated cannabis vape brands with the brands they’re seeing on the news.”

No Pot Brownies, Cookies, and Sour Peach Gummies For You, New Jersey

What to Know Before You Drink THC

Are Marijuana Penny Stocks A Buy Before November? 2 For Your Watchlist Right Now

The Hoax That Won't Die: THC-Tainted Halloween Candy Is Never a Thing

Top Marijuana Stocks To Invest In? 2 To Watch In November