Over 40% Video Content Is Consumed In Regional Language: Hotstar

According to a report by Hotstar, Tamil, Telugu and Bengali are the top regional languages preferred by users for consuming video content

By Shreya Ganguly December 10, 2019
Opinions expressed by Entrepreneur contributors are their own.
You're reading Entrepreneur India, an international franchise of Entrepreneur Media.

Demand for video and audio streaming has increased and this does not come as a surprise in the context of the rise in internet connectivity and penetration of smartphones. As the Indian OTT market continued to grow, players experienced an exponential rise in the demand for original and regional language content.

According to India Watch Report 2019  published by Star India-owned video streaming platform Hotstar, over 40 per cent video consumption came from regional content. According to the report, Tamil, Telugu and Bengali are the top regional languages preferred by users for consuming video content.

Interestingly, the report also revealed that while 80 per cent of Tamil and Telugu consumption was recorded from the native states, 35per cent of Bengali consumption came from outside the state.

“The accelerated growth of the Indian video entertainment ecosystem has had an unprecedented impact on the consumer. Today, the Indian consumer enjoys a plethora of content to choose from, has moved beyond metro cities, and isn’t limited by gender or language. More importantly, this growing accessibility has opened doors to new thoughts and ideas that are shaping a stereotype-defying consumer,” said Varun Narang, EVP and Chief Product Officer, Hotstar.

Non-Metro’s Ahead In Video Streaming

While urban areas were first to enter into digitization, internet access and smartphone reach is penetrating into the remotest of areas in India. This has led to an increase in demand for internet related services from Tier 2 and Tier 3 cities. 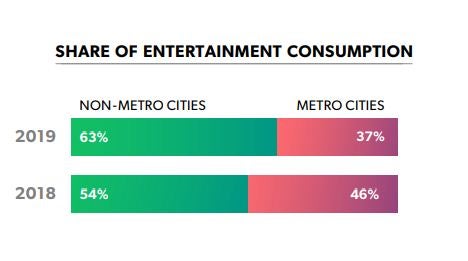 In order to meet the demands of original content, all the major OTT players such as Netflix, Amazon Prime, Zee5, and Hotstar among others are investing heavily to produce India-focused original content. Apart from regional language shows, the companies are also focusing on dubbing existing foreign language shows with high demand. According to the KPMG report, dubbing existing content is considered as an effective tool for the OTT players to quickly expand the catalogue of original and movie content available. Content can be dubbed into several languages such as Tamil, Telugu, Bengali, Kannada, Malayalam, and Marathi and reach to the audience of a different region.

These initiatives, as a result, are causing an increase in user subscription from non-metro and non-urban areas.

Resonating with Hotstar’s report, a survey report published by YouGov, a market research company, earlier this year also said that 72 per cent of people in India prefer watching content in languages other than the ones they know.

According to a report by RedSeer, the Indian OTT market is projected to grow 80 per cent from 170 million in 2019 to 300 million by 2022. In a bid to strengthen presence in this growing market, both domestic and foreign players are aggressively investing in producing original and local and language content.

Most recently, speaking at the 17th Hindustan Times Leadership Summit, Netflix’s founder and CEO Reed Hastings said that the company plans to invest INR 3000 crores for producing original content in India. Apart from focusing on the India-focused original content, the OTT streaming company is also planning to expand its Mumbai team which currently consists of 100 employees. In May, reports revealed Netflix had plans to launch 22 original movies and 11 series in India by 2020 as a part of the company’s aim to create appealing content from the country. The US company had made its debut in producing local original content in India with crime thriller ‘Sacred Games’, based on a novel by Vikram Chandra.

Hotstar is also looking to capture the OTT market with originals and thus announced the launch of Hotstar Specials. It earmarked INR 120 crore for producing original content.

Last year, media reports revealed that YouTube is also looking to strengthen its presence in the  India market with “YouTube Originals”. With the foray into the original content making segment, YouTube also forms a major rival for the OTT players.