By Shreya Ganguly January 24, 2020
Opinions expressed by Entrepreneur contributors are their own.
You're reading Entrepreneur India, an international franchise of Entrepreneur Media.

Internet penetration in India has undoubtedly given a boost to social media usage and online content consumption. With popular social media platforms reaching out to millions across the country, it serves as an important outlet of advertisement for  business and political parties.

According to the recently published, Digital Advertising in India 2020 report by Dentsu Aegis Network (DAN), advertisement spending on digital media in India is led by social media with the highest share of 28 per cent amounting to INR 3,835 crore in the total digital advertising pie.

Social media share is followed by spending on paid search which accounts for 23 per cent, online video accounts for 22 per cent and display media forms 21 per cent.

“2020 is going to be cricket heavy; and this, along with the upcoming state and Rajya Sabha Elections, should be able to generate strong demands in advertising. Also, the instant feedback and the ability to track ROI from digital—some of the most distinguishable traits of this medium, will once again make it a favorable platform among advertisers,” said  Anand Bhadkamkar, CEO of DAN, in a statement.

According to Bhadkamkar, as the economy starts looking up in 2020, voice and technology will become the biggest driving forces, and together they may provide a huge impetus to the Indian advertising and marketing industry this year.

The report also showed that advertising spending on digital media is expected to grow at a compounded annual growth rate of 27.42 per cent to become INR 58,550 crore market by the end of 2025. Factors such as technological advancements, improvements in data science and analytics, introduction of policies and regulations, among others, will drive this growth. 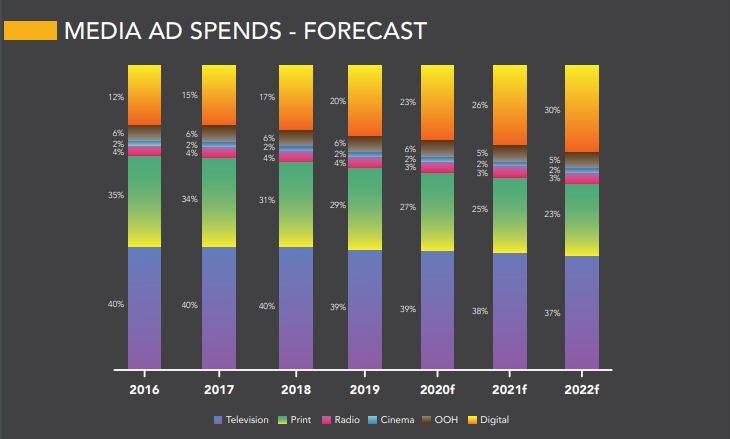 A deeper insight into various industry segments showed that FMCG has the highest expenditure on advertising, i.e. 30 per cent amounting to INR 20,182 crore followed by e-commerce  at 10 per cent and automotive segment. The biggest spenders on digital media are BFSI (42 per cent), consumer durables (38 per cent) and e-commerce (37 per cent). 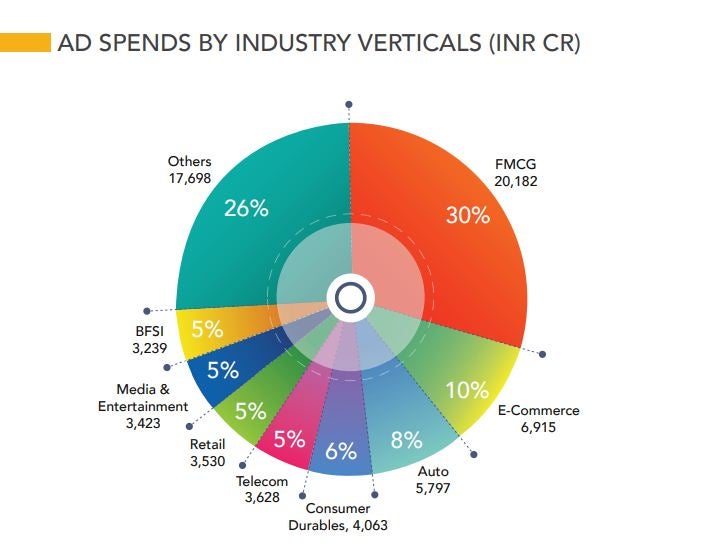