Through Flipkart and Myntra, Walmart has clocked a growth of 26.3 per cent between Q4 2018 and Q4 2019 in app sessions in India, as per Apptopia

Walmart’s acquisition of Flipkart in May 2018 was world’s biggest purchase of an e-commerce company. The deal seems to be rewarding the US retail giant as Flipkart and its fashion retail arm Myntra (acquired by Flipkart in 2014) have together raced ahead of Amazon in terms of mobile app sessions in India, as per Apptopia’s Q4 results on mobile shopping.

Through these two brands, Walmart has clocked a growth of 26.3 per cent between Q4 2018 and Q4 2019 in app sessions in India, touching 1.7 billion in 2019. In comparison, Amazon sessions grew by 8.4 per cent during the same period, the report shows. Walmart’s own app is not live in India. 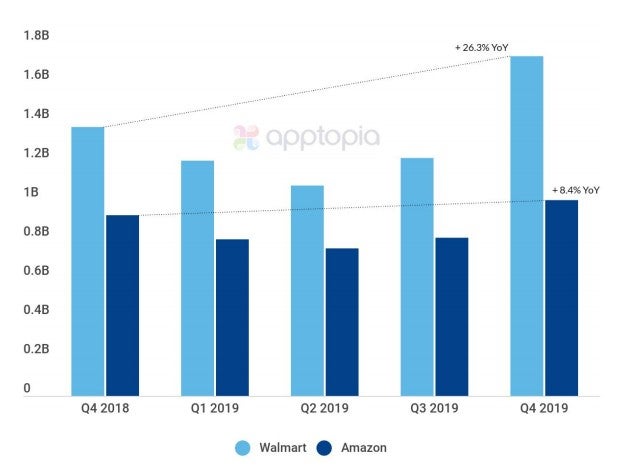 Not the one to bow down, Amazon has beefed up its efforts to keep fighting the e-commerce competition in India. “To fight back, Amazon recently partnered with Future Retail, which operates six retail chains across India,” stated the report. Recently, Amazon founder Jeff Bezos announced an investment of $1 billion (INR 7,000 crore) to digitise small and medium businesses in India.

Flipkart is ahead of Amazon in terms of monthly active users (MAU) also, shows the report. As a result, Flipkart also clocked more number of downloads in Q4 2019 compared with Amazon.

Interestingly, market share of both Flipkart (31.9 per cent) and Amazon (31.2 per cent) is almost similar, as per data provided by financial services company Standard & Poor’s. In that case, higher number of active users on Flipkart app indicates that it might be the preferred site for purchasing small-ticket products.

The report shows an emerging player in the Indian e-commerce space, Club Factory, posing serious competition to both Flipkart and Amazon.