Credit Adoption Among Gen Z Faster Than any Other Generation

After millennials, Gen Z—those born in or after 1995—seem to be taking the centre stage for trend forecasters and market researchers. The credit information company Transunion Cibil recently conducted a study to gauge the credit activity of Gen Z across emerging as well as established consumer credit markets.

For India, the report shows that the adoption of credit—consumer loans and credit cards—among Gen Z is growing faster than any other generation.

Of the 147 million total Gen Zs eligible to apply for credit (18-25 years of age), 6 per cent or (nearly 9 million) were credit active in calendar year 2019. It is huge because in comparison, only 10 per cent of the total adult Indian population (nearly 765 million) is credit active.

“Our belief is that the desire for credit among this generation is significant and growing at a faster pace than any other generation. As well, the way they apply for and use credit will likely generate an even greater level of demand,” said Abhay Kelkar, vice president of research and consulting for TransUnion CIBIL, in the press release.

What is Gen Z Borrowing For?

Next in line are consumer durable loans (13 per cent) used mainly to buy a smartphone, laptop or personal computer, followed by credit cards (11 per cent) and personal loans (6 per cent) to finance living expenses and make smaller-ticket purchases. 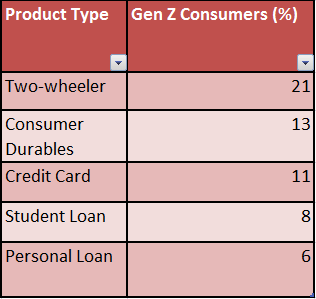 The study reports an exponential growth in credit participation by Gen Z consumers. In terms of origination growth—the rate at which new accounts are being opened—between calendar years 2018 and 2019 credit cards grew 150 per cent, followed by consumer durables at 113 per cent and personal loans at 95 per cent.

Non-banking financial companies (NBFCs) and FinTechs are driving the growth of personal loans by making credit easily available for the younger population.

A common belief is that Gen Z consumers have lower credit scores because they have just started their career and may lack an extensive credit history for lenders to assess.

But the report shows otherwise. Credit score of about 51 per cent Gen Z consumers fall in the prime (731-770) or above category, which is in line with the national average. 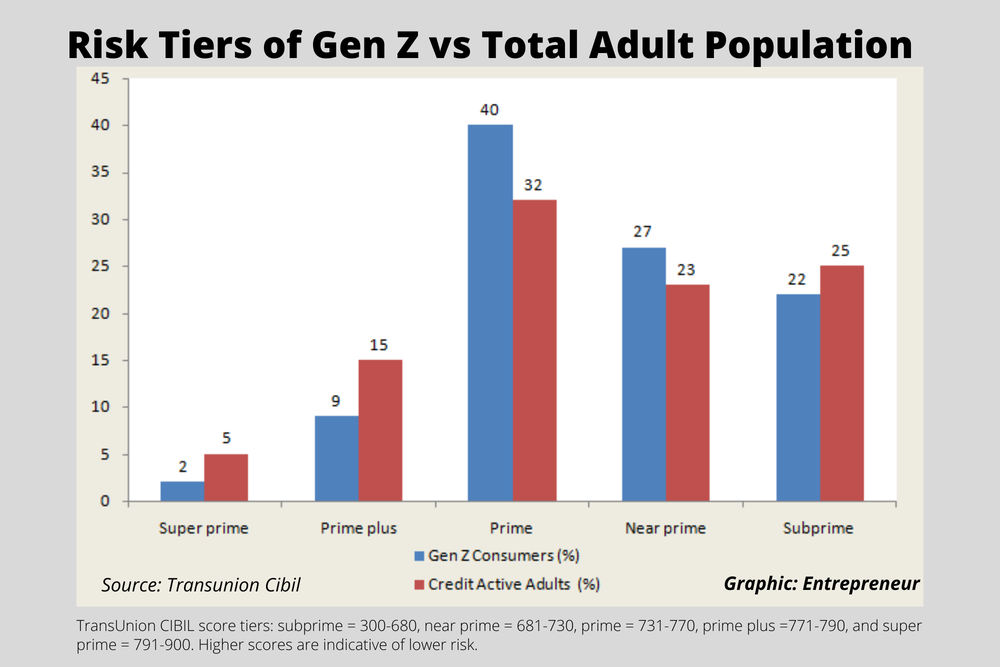 Credit Active Gen Z in India Vs Other Countries

The study reported a relatively large divide in how Gen Z approaches credit in emerging versus established credit markets. India has the smallest number of active credit users among Canada, Columbia, Hong Kong, US and South Africa.

“In emerging markets, lenders may be more conservative with extending traditional credit products to Gen Z, as those consumers may not yet have the credit histories and track records those lenders use to assess and manage risk,” said Kelkar. 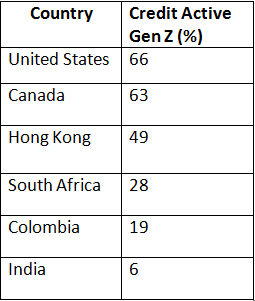 Credit card penetration among Indian Gen Z is also fairly low compared to other countries. Only 11 per cent of credit active users have a credit card in India, whereas Hong Kong and Canada have a penetration rate of almost 90 per cent.