According to a report by Shiprocket, 68 per cent of women selling online are from tier-II cities.

In the last few years, e-commerce in India has well and truly started to move beyond the traditional routes. As the idea of mainstream has evolved, those from the smaller cities have begun to adapt and reap the benefits of selling online. This trend has found its way in the large number of women who sell online as well, as per a recent report.

Shiprocket, a logistics aggregation platform, found that 68 per cent of women selling online were from tier-II cities. The report, titled ‘Mapping India’s e-commerce Womenpreneurs’, was created based on the responses of 1,900 sellers across tier-I, tier-II and tier-III cities between 18 and 45 years.

An interesting finding of the report was that 28 per cent of the women were homepreneurs while 72 per cent were professional sellers.

“The findings of the report fall in line with the growth of the direct-to-consumer e-commerce market in India. Social media has emerged as a popular channel for women sellers, especially for homepreneurs which constitute housewives, college students, and part-time sellers,” said Saahil Goel, chief executive officer and co-founder at Shiprocket. 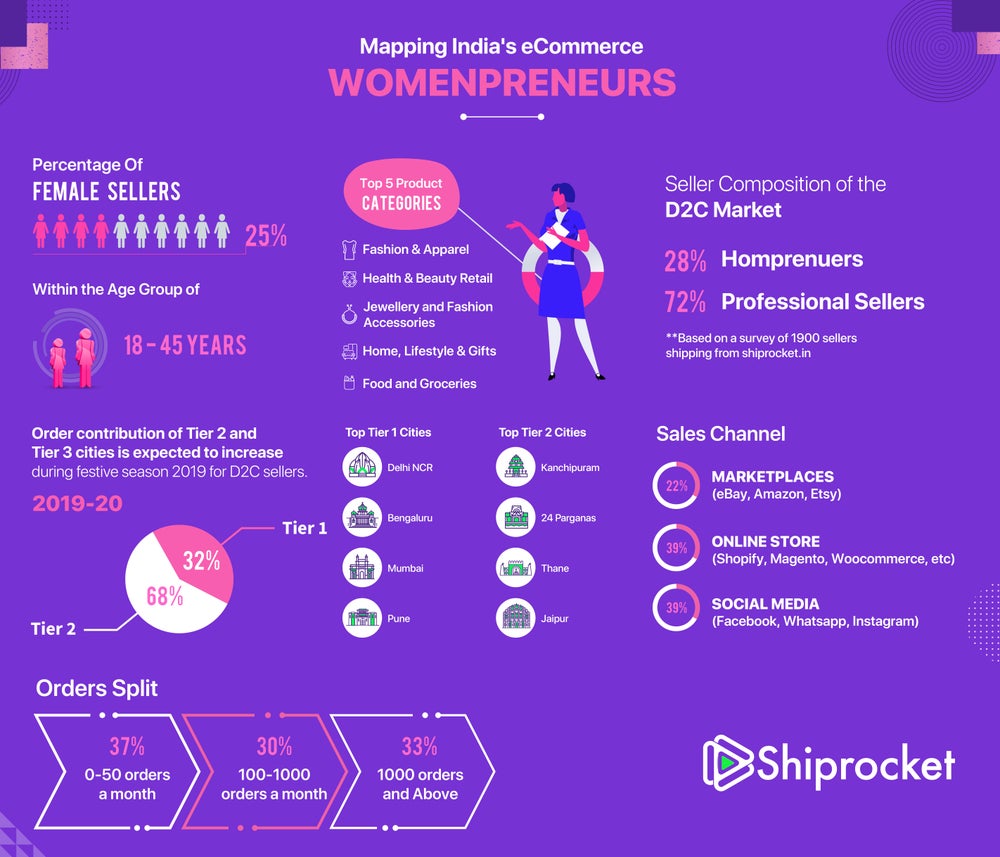 In the overall D2C landscape, about 25 per cent of all sellers are women.

The report found that women selling on social media comprised 39 per cent, identical to those selling via other online channels such as Shopify, Magento and Woocommerce. “This trend coincides with the rise in the use of social media platforms such as WhatsApp, Facebook and Instagram, along with an uptick in the use of standalone e-commerce portals,” it said.

For 22 per cent of women sellers, marketplaces such as eBay, Amazon and Etsy remain the preferred choice.

Top product categories for women sellers were fashion and apparel, health and beauty retail, jewellery and fashion accessories, home and lifestyle, and food and groceries.