Which City next in India? Know the Preferred Location for Leadership Workforce

Until a few years ago, the term 'digital skills' was more focused and centric to computer science/traditionally heavy technology sectors. However, with time the role required in the tech industry has increased and altered. The emergence of new-age sectors like FinTech; consumer-tech; health-tech and Edu-tech among many others have changed the definition of the digital skill job profile.

Digital advancement has changed the functioning of the industry. Everyone today is aware of the multi-benefits that it can tender to make chief players struggle for a piece of the pie to provide picture-perfect know-how to their stakeholders. Like any other business, the competition that the tech industry sees is at its peak. There is an unparalleled rise in the demand for core tech skills.

When there is a rise in demand for talent, it is essential to understand where is the tech talent migrating and which will be the next big hub when planning to set something. To get a broader view of the same, Entrepreneur India spoke to Gaurav Chattur, Managing Director at APAC, Catenon (a tech-based multinational company in data-driven recruitment and talent solution) who gave us an elaborate analysis of two things.

Check out the fascinating trends that reveal which city next will India's tech talent migrate to:

As the new decade starts ‘Quality of Life’ and ‘Environmental factors’ will dominate the charts when it comes to making a migration decision.

"It's interesting to note that a significant number of senior professionals from Mumbai, Pune, Hyderabad, and Chennai are willing to relocate to Bangalore and Delhi (NCR), it is quite interesting to observe that more talent is willing to move out of these locations. While this may be a function of the higher base of professionals in Bangalore and Delhi, it could also be due to other factors like daily commute, pollution levels, and cost of living," said Chattur after speaking to tech professionals in the metros in India.

The capital is no more the most preferred city of choice tech talents. Pune and Hyderabad ace the list followed by Bangalore; Mumbai, Chennai and Delhi. 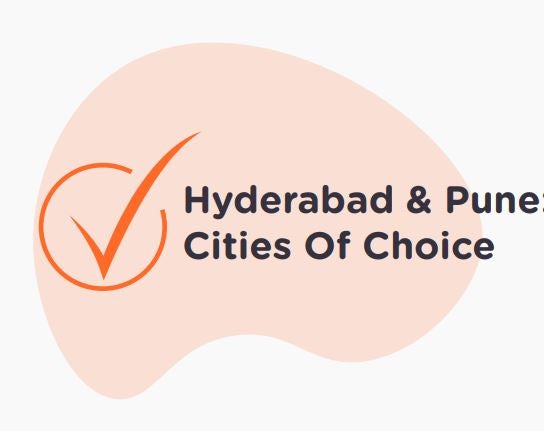 What makes Pune play a vital role in the list is its fast-developing tech infrastructure, better traffic, reliable safety index, lesser pollution which makes it an affordable choice than other metro cities.

"The entry of big players like Amazon, Google, and Facebook in Hyderabad has greatly helped with more than 50 percent to be it either the first or second preference for migration. Plus it is also the cultural middle ground for north and south Indian migrants making it popular among them," highlights Chattur.

The popular cities like Mumbai, Bengaluru, and Delhi have reached their exhaustion making other cities like Pune, Hyderabad, and Chennai more popular among tech talent professionals.

"Hyderabad attracts the most talent in the country, mainly from Bengaluru. Also, Hyderabad has better air quality and water ratio making it preferred more among the senior tech professionals looking for a relatively healthy, urban living," said Chattur.

The Strength and Weakness of the City

The relative strengths and weaknesses of the city play a vital role when professionals decide to migrate for a job. To get a picture of which city is preferred most Chattur shares from their report.

Result-Pune preferred as much as other top cities.

Result- Hyderabad is becoming home to big IT companies. The city will also see other major players moving in this year.

Parameter- The city accounts for 26% of the total office space leased in India.

Result- It's the IT hub of the country and draws the highest salaries making it the third most preferred city. 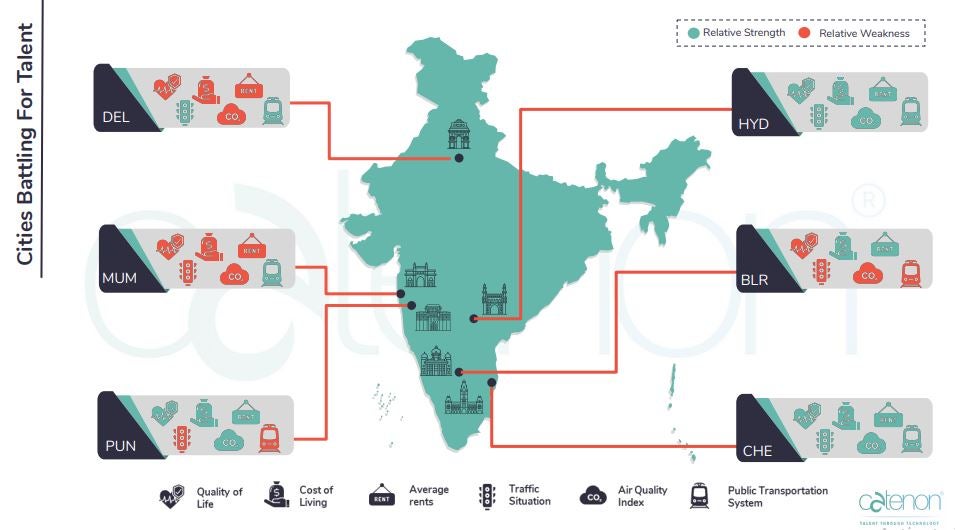 "The highest hike rates for the job roles are in Bengaluru and Delhi. Mumbai, Chennai offers lucrative hikes too. Talking about Pune and Hyderabad the hike is steady around 15%," states Chattur.

Daily Commute and Its Much-Awaited Metamorphosis

As per the Catenon survey 53 percent respondents from face more than 60 mins of travel one-way which is not just bad for health but also affects one's productivity.

Many also raise the concern that seniors who are not working on a client-server or on a proprietary format (which makes you need to be at the office) work from home should be allowed.

The senior management people would want to turn this into practice in the next 5 years. How will this help? It will increase your productivity and work-life balance, rather than spending 2-3 hours in traffic which wear and tear your body.

For 64 percent of the people, six factors play a major role when deciding the shift. 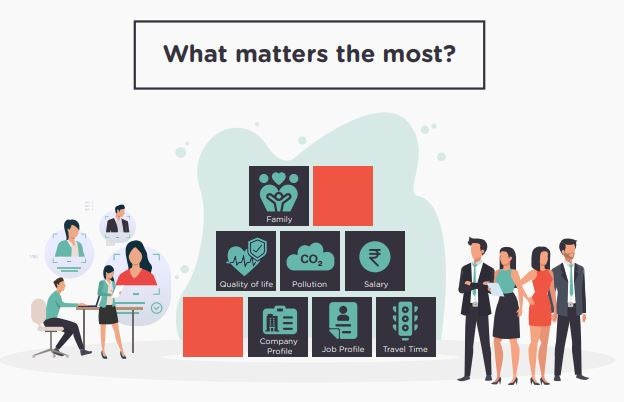 The people today look at the job from more than just a remuneration or position. Quality of life, work-life balance, and life beyond office have become the curial part when it comes to picking any job. Making the city of work a very curial aspect when it comes to deciding if the job being offered will be rejected or otherwise!