A Local Circles Survey found that only six per cent were covered, in terms of cash, for a period of more than six months.

By Debroop Roy April 28, 2020
Opinions expressed by Entrepreneur contributors are their own.
You're reading Entrepreneur India, an international franchise of Entrepreneur Media.

As an expected fallout of the Coronavirus outbreak and subsequent lockdowns, start-ups and small and medium enterprises (SMEs) in India have already begun to feel the heat of business disruption, as per a survey by community platform Local Circles.

The survey received more than 13,970 responses from start-ups and SMEs in over 90 districts.

It found that only six per cent were covered, in terms of cash, for a period of more than six months. 23 per cent said the available runaway was between three and six months while for 24 per cent, the remaining cash will only last them one-three months.

A staggering 20 per cent said their cash would last them less than a month while 27 per cent are already out of funds. 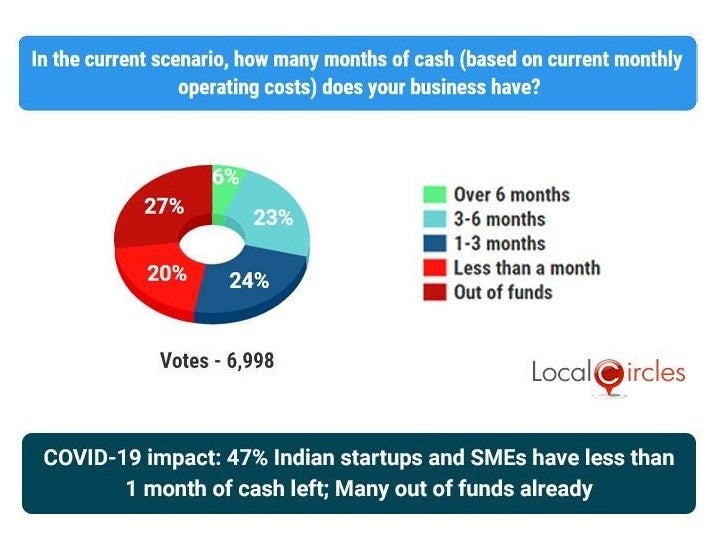 Seven per cent even said they were looking to sell their business.

According to multiple reports, even heavily capitalized players, including Unicorns such as Facebook-backed Meesho and Udaan in India's start-up ecosystem, have resorted to downsizing since the pandemic put a stopper on regular activities.

Last month, start-ups and SMEs had via Local Circles submitted various demands to the government  in order to wade through the crisis. The demands include 50 per cent of employee salaries for one month or a one-time INR 20 lakh grant for those registered with the government.

Expediting payments from public service units, large corporates and the government, processing TDS refunds for the last fiscal year within 15 days and enabling CSR funds to be deployed into start-ups were some of the other demands.