Strat-O-Matic's Surge in Demand Is No Fantasy

With Major League Baseball and other pro sports on hold, the iconic, family-run simulation platform is proving more popular than ever. Company president Adam Richman explains how they were ready for the rush.

Hal Richman's story is the stuff of authentic legend. While attending Bucknell University in 1961, the enterprising, Long Island-bred teen conceived of a cards-and-dice game that allowed sports fans to competitively simulate an entire Major League Baseball season based on existing player stats, research-driven value assignation and a bit of chance. Accordingly and enduringly, Richman dubbed his innovation Strat-O-Matic, and thanks in part to a good-faith loan from his father for early advertising, the product quickly took off as an intergenerational tabletop phenomenon.

Over the ensuing few decades, Richman's Glen Head, NY-based startup blossomed into a cultural institution, releasing versions for the NFL and other pro sports leagues. It's made fanatics out of legends like former Met great Keith Hernandez and Hall of Fame broadcaster Bob Costas. Spike Lee even shouted out the pastime in his period piece Crooklyn.

Alas, as the calendar turned to a new millennium, online fantasy sports seized the market Strat-O-Matic once cornered. The company did its best to keep apace by unveiling web-only iterations of its classic model, but as the likes of ESPN and Yahoo scaled up efforts to replicate and enhance what Richman had devised, Strat-O-Matic was gradually crowded out of the market. The brand remained active, but largely leaned on its heritage appeal rather than aggressively seeking out new customers.

Related: Nataly Kogan Knows We Can All Still Be Happy

But then came this year's global pandemic, and consequently, the cancellation or indefinite delay of all major professional sports around the world for 2020 and possibly beyond. That meant no fantasy sports, either, which left captive fanbases sheltering in place with nowhere to turn to approximate the rites of spring. That is, until they discovered — or in many cases, rediscovered — Strat-O-Matic, which had been continuing to issue its classic physical board game but also diligently upgrading its multimedia augmentation for virtual play. 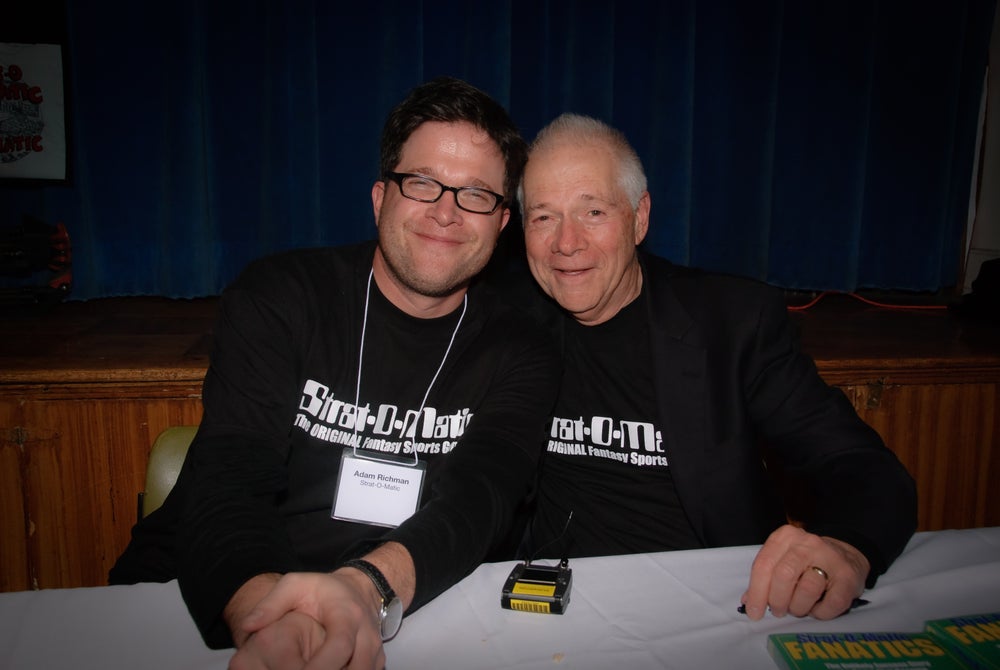 Father-and-son Adam (left) and Hal Richman are rising to the occasion of renewed demand for the Strat-O-Matic product Hal created.
Image credit: Strat-O-Matic

That diligence paid immediate dividends. For the weeks of April 1-28, sales of the board game increased 75 percent over the same period last year, while new-member signups for its Strat-O-Matic Baseball 365 online offering more than doubled.

None of this is necessarily a surprise to current company president, Adam Richman, who also happens to be Hal's son. (Hal still remains involved in aspects of operations.) Nor were he and his team caught flat-footed by the surge in demand for a brand that had been relegated by many as niche or nostalgic.

Speaking by phone from Long Island, where he's been spending much of his quarantine with his family, Adam was reflective about the predicament we all find ourselves in. He was also clear-eyed about how Strat-O-Matic is prepared to fulfill demand now, even as they forge ahead with plans to innovate and entertain when players take the field again.

What's it been like to balance your family's needs during this crisis while also tuning in to how this would increase demand for your family run business?

If we could snap our fingers and bring the world back to the way it was, we would, but right now, everyone is obviously at home and they're looking for a connection. People who are sports fans are also missing that connection, and so a lot of people have been turning to Strat-O-Matic. We've been seeing three buckets of consumers in this period, and it's really our job to give them a good experience and give them enough depth in terms of our product offerings.

Can you elaborate on these consumer buckets?

We're seeing our fan base, which is really fanatical and always has been and always will be. But then we're also seeing these other two buckets. The first is just new players, younger players. A lot of it has to do with intergenerational play. When all of us are hunkered down in our homes, you want to have that connection with your child. Also, parents and grandparents are starting to play with younger people in the educational sense, which has been fascinating, because the game has always been used to teach kids. A lot of parents use the game and say, "OK, you just finished your game. Now write up a news report about who won." And so we're seeing a big growth in that area too.

Then the third bucket is lapsed players. Next year is our 60th anniversary, and a lot of those people are coming back. They're going into their basement and getting out their old Strat-O-Matic and ordering new card sets, old card sets, different sports scans. 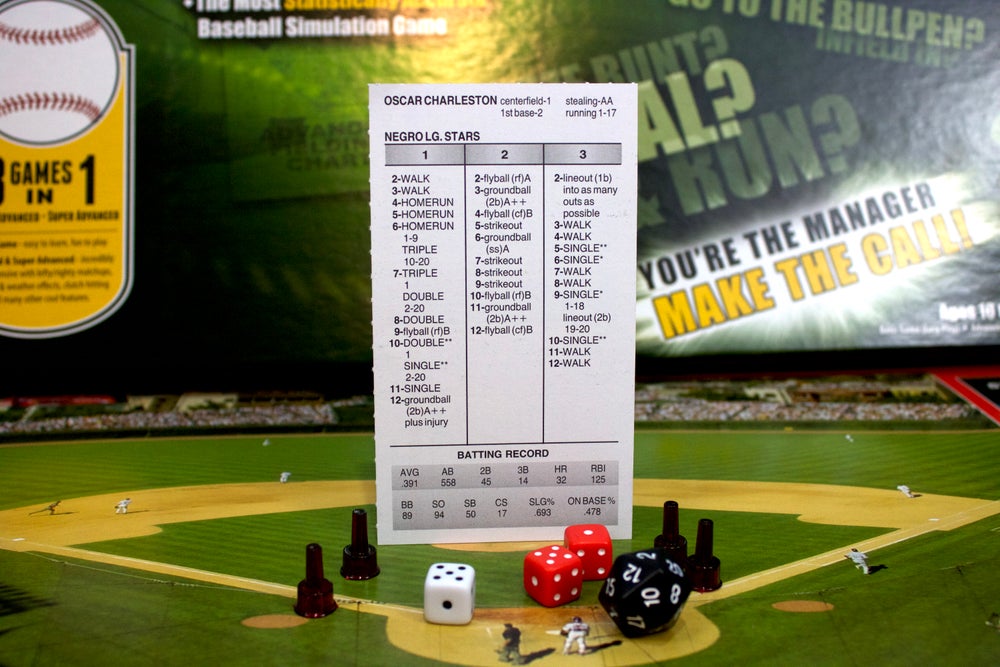 Has there been a unifying business philosophy for reaching those disparate groups?

One of the trainings in business school was to look for disruption, and I think there's many kinds of disruptions. And as we're learning, unfortunately, [there is] societal disruption. If you can look at how that disruption can affect your business in a positive way and lean into that, there might be value to be found, and I think that's what we found.

About nine years ago, we effectively shut down the Strat-O-Matic game company and reopened as Strat-O-Matic Media, and that has been a very different approach to the company. It's really why we have been able to sort of lean into this disruption right now.

It's really hitting it from different angles — through legacy love of the brand, through new social media, whether it's Facebook ads or Google ads or people who work on social media for us running different contests. Or whether it's through partnerships we're about to announce with other media organizations. It's been amazing diving deep into the digital-marketing side, because we can really go after all of these demographics in different ways. You don't have commit to one demographic or one audience because they all need to be spoken to differently.

Has there been any disconnect in agressively pushing both iterations of the game at once?

It's not like, "Oh, we're really charging ahead on our digital platforms" or "We're really charging ahead on our physical product or board game." We're charging ahead everywhere. And I think the messaging for us is very much that you can experience us on your screen or you can have the original face-to-face tactile experience, and we're really offering all of it now and going full steam on all of it. A tremendous amount of rigor in terms of our proprietary algorithm, quantitative and qualitative analysis is singular to Strat-O-Matic and then expressed on these different platforms.

So much of what we've been about is what sports are about: connecting generations through the love of the game. That's obviously still so important to us in the core of our company, but we also want it to be prospective, so we came out with a product called Strat-O-Matic Baseball Daily, which essentially looks forward at the season that's coming. And I think that goes back to what I was originally talking about — looking at the company more as a tech company, as a data provider, as a company that's disseminating information and looking at simulation in a new way. It's providing information that then sort of circles back into product.

You guys ultimately have a fairly small team. Was it challenging to ready for all the extra traffic on the back end of the site?

We have a huge announcement coming next year that we're not ready to talk about yet, and we have a large development team we've been working with on that. But I wouldn't say that things have necessarily changed in terms of the way we're presenting our game. I think what changed is in terms of the way we're marketing. In the midst of all this insanity in the last two months, we realized we just have to be as flexible and fast-moving as we can be. We can get products out to market quickly.

Compared to the big corporate names with a foothold in fantasy sports, has it actually been easier for Strat-O-Matic — as a smaller, family-run operation — to be fluid right now?

I think you hit it on the head. The ability to have an organization that in many ways is very flat — where everyone feels like they have a voice and everyone's ideas are counted and they matter, and everyone is doing a little bit of everything —  enables us to a foster an environment where we have a very well-oiled team that works incredibly well together. Having worked with very large organizations, it's much harder to move the needle quickly in a situation like this, because there's so many layers of approval you have to go through to change your business and change it quickly.

Is there an example of someone from your team having come to the table with a creative idea over the past two months that has helped you adjust?

Our research director, John Garcia, is instrumental in setting up the parameters for this [Baseball Daily] simulation and creating a rhythm to it so that the market can come in and enjoy it. As a company, we were already in the mindset of simulating events that hadn't yet happened, but actually figuring out the operational plan — John was instrumental in making that happen.

How do you go about now making an impression on people from all generations so there's a space for you in the broader fantasy landscape once sports resumes?

It's a great question. I mean, that's what we're working towards, right? The first way is by educating new consumers about the depth of our library and the work we've done over six decades. Our job is is to make sure all those consumers know they have a huge playground to jump into. The other part of it is the nature of this pandemic. In terms of live sports and sports in general, it's just going to make simulation more important, because even once baseball and football and basketball and hockey come back, there will probably be times where they have to pause again.

Related: How a Mid-Size Company Made Major Adjustments in the Empty-Arena Era

Invariably, an organization might inquire about whether you'd ever sell the company. How would you respond in the midst of all this renewed popularity?

We're not actively looking for a buyer. We never have been. We get calls every year from people who are interested in buying Strat-O-Matic, and we take every single one of them. But you know, it's been a family-owned business for 60 years. We have a wonderful group of investors who are very supportive of our vision. I mean, we're open to everything, but it's not like we're spending our time now saying, "Oh, we've got to attract Google or Facebook." We're doing what we've always done, which is providing the best simulation games on the market, and that's what we're going to continue to do.

It's the only game in town right now, so it's allowing people to come together and be with their friends. It gives them something to connect to, and that's always been the beauty of Strat-O-Matic.

Give the People What They Want (and Then Some): The Magic of Overdelivering