Is Work from Home the New Lifestyle Change That Young India Was Seeking?

Study suggests that WFH can become the new norm

By Priyadarshini Patwa May 14, 2020
You're reading Entrepreneur India, an international franchise of Entrepreneur Media.

However, looks like WFH has definitely become a way of life, and eventually, we all are getting habitual to it. The latest study by Buzzinga Digital exclusively shared with Entrepreneur India reveals that over 50 per cent of corporate India prefers working from home.

The New Way of Life:

The past few months have left many corporate businesses in India on the precipice of an abyss. Treading on the edge of the COVID19 pandemic crisis hasn’t been easy, but the Work From Home (WFH) solution has provided some much-needed traction.

“We could be at the cusp of another digital revolution, and this time, the impact can change the way we function… forever!" said Yashraj Vakil, CEO, Buzzinga Digital.

Remote-working increasingly started becoming the new norm as on-ground operations came to a grinding halt. And while normalcy peeks out from behind the quarantine curtain, it’s undergoing a metamorphosis.

But at the same time, it is essential to understand what does this transition means for employees? How are they coping? And the most crucial question of all - is this new culture here to stay?

The study was conducted via an online survey where almost 500 industry professionals from across the spectrum participated. answers the basic and vital questions. The comprehensive research attempts to understand the behavioral and professional changes the WFH culture is revealing, especially during and post-COVID19.

"Better logistical support from companies and favorable WFH policies have the power to turn the scales in favor of the positive as almost 33 per cent of the respondents are willing to embrace this as a lifestyle change for the future,” highlights Vakil.

The Hurdles and Drawback:

The study also found 55 per cent of the participants find social-isolation to be the biggest hurdle, followed by 44 per cent stating that maintaining a regular work-like schedule is difficult. About 40per cent of employees find the lack of face-to-face interactions with co-workers another drawback, while internet connectivity issues ranked 41 per cent as a big hurdle for digital India.

While many gave drawbacks there were many who liked WFH. The void left by personal communication has been effectively filled by a virtual one. 63 per cent cited their e-relationship with co-workers was either excellent or ‘Very Good’.

More importantly, the survey also asked individuals how supported they felt during the first week and the consequent results corroborate the previous stats – 69 per cent felt either ‘Very Supported’ or ‘Extremely Supported’; however, 31 per cent either felt meagerly supported or unsupported.

Talking about it Raj Gopal Iyer, General Manager - Marketing, Tata Croma, described WFH to Entrepreneur India as a “win-win” for employers and employees, stating that firms can benefit from WFH just as much as their staff. "WFH allows several enterprises to curb their overhead costs like rent, electricity, maintenance, etc. and other miscellaneous expenses,” he added.

The Biggest Motivation for WFH 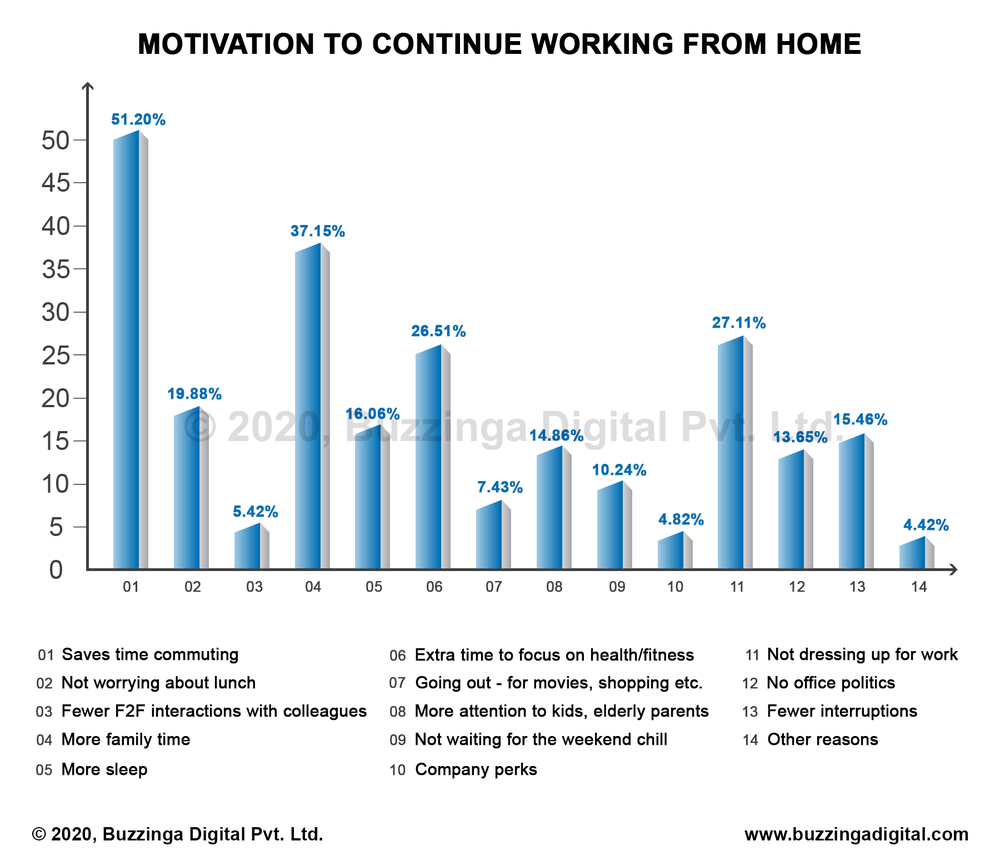 The survey also highlighted that most Indian’s dislike their commutes. 51 per cent said that their biggest motivation to continue working from home was not having to do it. 37% of the respondents getting to spend extra time with family became another motivator to continue working from home. But an astonishing number of participants,40%, describe not having to dress up for work as a source of motivation.

While life will have to return to normal and offices will start working again. However, the question is are people willing to return back to commercial concretes?

The survey asked how often they'd want to - 59 per cent said two-three times a week and 10 per cent stated they don’t like the idea of going back to work from an office. When asked how they’d choose to communicate while working from home, chat/internet fatigue was visible in the answers as 48 per cent chose phone calls as a way to connect and spend time with colleagues.

Although quite a few participants seem content with WFH, 75 per cent wistfully recalled that they missed face-to-face interactions. The learning environment at a workplace and miscellaneous conversations with peers stood at par with each other at 44 per cent.

What People Miss and What They Don't

Another interesting fact revealed that 16 per cent miss office air-conditioning and 80 per cent of respondents don’t miss office coffee, yet 66% felt they work more hours when working from home. Maybe there is a need for offices to ramp up their coffee game.

Permanent Curfew - Yes or NO 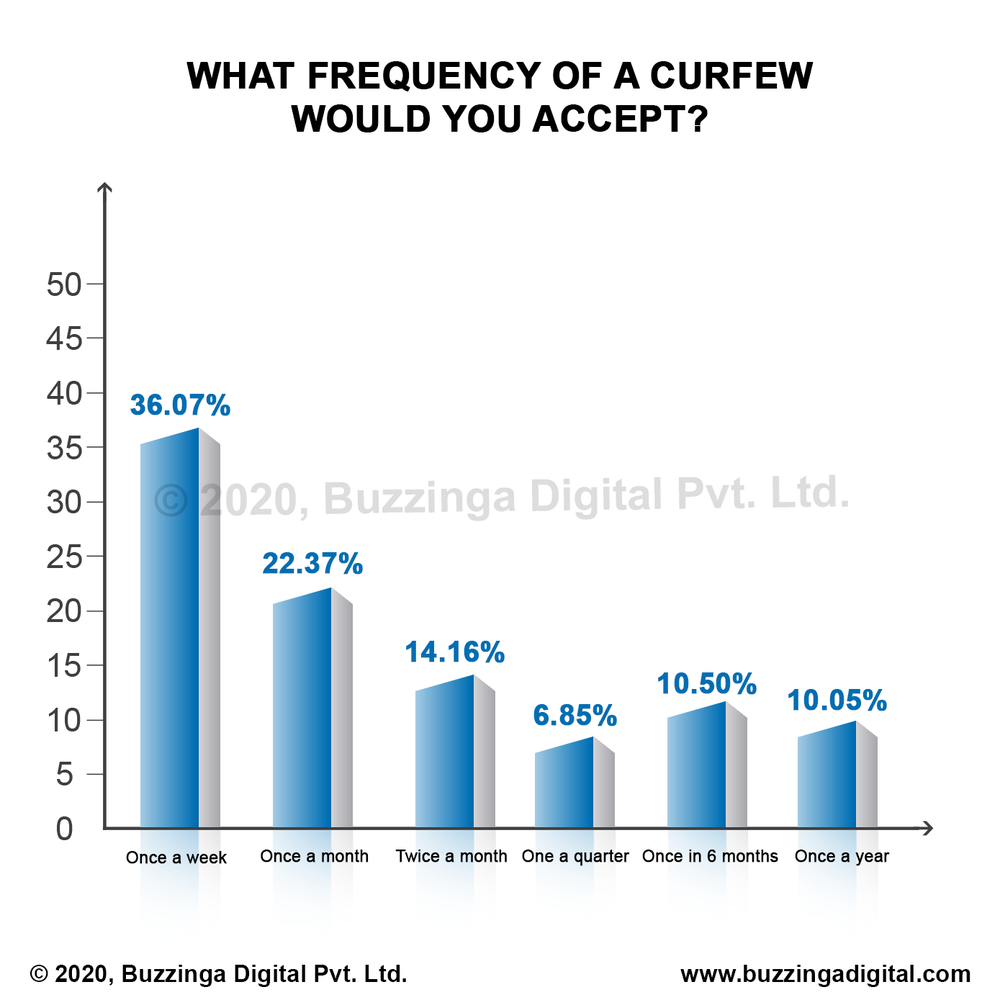 Very importantly the study also asked if post-Covid-19, individuals were would accept a curfew as a permanent fixture in their calendars. Instantly 45 per cent of the respondents replied ‘Yes’.

Furthermore, the survey inquired if a curfew were to become a common practice in the future, how frequently would they be willing to accept one? 37 per cent of participants responded once a week and 23 per cent chose once a month. However, 10 per cent say once a year is an ideal number.

A large chunk of the surveyed cites environmental reasons as their primary reason to accept a curfew with 77.02 per cent believing that it is good for the ecosystem. Another 61.49 per cent say that it can reduce the consumption of Fossil Fuels.

Overall, the survey indicates that WFH can potentially be the next big shift in India’s work culture. Companies that have conducted their business in traditional office spaces so far have been the hardest hit from lockdown restrictions. However, to avoid a similar fate in the future, even traditionally run companies are likely to embrace digitization.

“The world is embracing digitization. Computer sales have seen a rise as adults work from home and children take online classes. Virtual gaming is another sector that has witnessed a surge in popularity. All-in-all, these trends indicate that the shift from physical to digital will further accelerate cloud computing," said Pawan Awasthi, Head Consumer Marketing at NVIDIA India.

Having said for employees, this may herald a massive change in how they work. At present, how successful the WFH experiment will be is still a matter of speculation, but time will tell. However, it could be our best bet until the COVID19 pandemic ends and before the lockdown is lifted.