Despite Relaxations, Recovery Could Be Tough For Restaurants and Food Delivery Apps

According to a survey conducted by community platform LocalCircles, 74 per cent respondents said they will not be visiting their favourite restaurant in the next 30 days even if it was open.

By Debroop Roy May 22, 2020
Opinions expressed by Entrepreneur contributors are their own.
You're reading Entrepreneur India, an international franchise of Entrepreneur Media.

While India has made significant relaxations to the Coronavirus-enforced lockdown, which is now in its 4th phase, restaurants and food delivery companies have continued to face the pinch. Restaurants are yet to receive permission to open for dining purposes, and the latter, too, have suffered as customers continue to be wary of ordering from outside.

According to a survey conducted by community platform LocalCircles, 74 per cent respondents said they will not be visiting their favourite restaurant in the next 30 days even if it was open.

The survey, which received over 24,000 responses, saw participation from citizens located in 232 districts across the countey. 71 per cent respondents were from tier-I cities, 20 per cent from tier-II and the remaining from tier-III and beyond.

On why they wouldn't want to visit their favorite restaurant in the next 30 days even if the rules allowed, 38 per cent said they feared getting infected from restaurant staff, other visitors or via food while 12 per cent chose not wanting to spend on eating out right now.

49 per cent said they wouldn't due to both of these options. 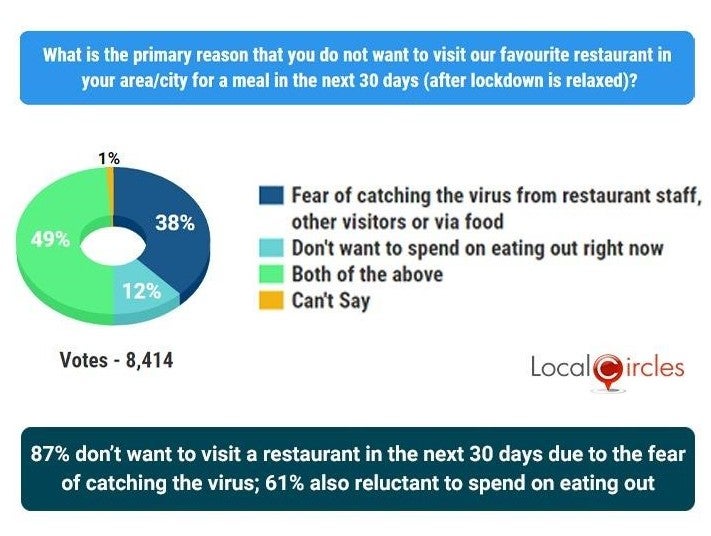 In an earlier interview, Kallol Banerjee, the co-founder of cloud kitchens operator Rebel Foods revealed that the company's overall sales had fallen about 30 per cent from pre-COVID levels while average ticket size had gone up 60-70 per cent.

People are now more likely to choose trusted brands over unknown ones, and avoid experimenting when it comes to food consumption, he had said.

While online ordering and home delivery of food is available, 65 per cent said they will not order restaurant food for delivery in the next 30 days, while 10 per cent respondents were unsure of what they would do. 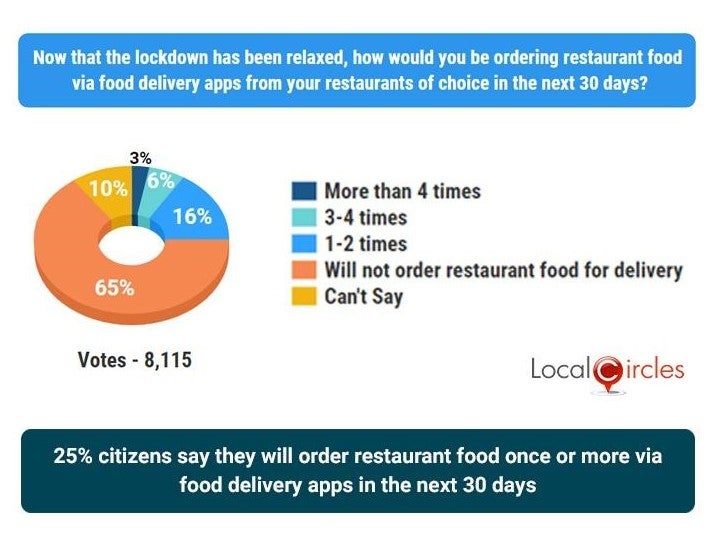 Earlier this week, the Federation of Hotel and Restaurant Association said at least 70 per cent of hospitality establishments in the country could face closure, in case of no help or support from the government.

Order Up: As Fast Food Continues to Turn Vegan, What's Next?