About 76 per cent respondents to a survey conducted by community platform Localcircles said they do not plan to take a flight in the next 30 days at least.

By Shipra Singh May 28, 2020
Opinions expressed by Entrepreneur contributors are their own.
You're reading Entrepreneur India, an international franchise of Entrepreneur Media.

Country’s skies opened up to domestic passenger flights on 25 May after 60 days. But, people’s sentiments to travel via air remains tepid, shows a survey.

About 76 per cent respondents said they do not plan to take a flight in the next 30 days at least, as per a survey by community platform Localcircles. While 10 per cent reported to have booked a flight ticket for travel in the next one month, 11 per cent said they have not booked yet but plan to soon. 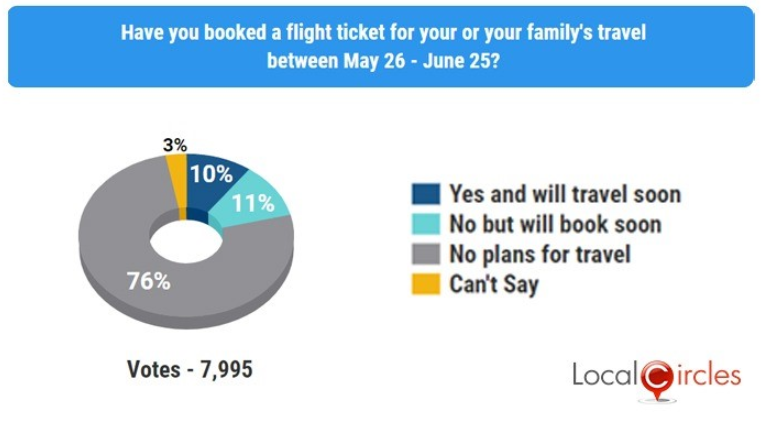 However, feedback from the survey respondents indicates that those travelling by flights are primarily the ones who were stranded due to sudden lockdown on 22 March 22 or those on temporary assignment/studies in different cities. These passengers are either returning home or visiting aged or unwell family members in need.

“The feedback from those travelling indicates that of the total travel by flights in the next 30 days, business travel would be less than 5%,” the survey stated.

The picture is not much different for train travel either. Ministry of Railways started 30 special air-conditioned trains mid-May and has announced to resume another 200 IRCTC special trains from 1 June. A meager 10 per cent reported that they or their family members plan to undertake a train journey between 1 June and 30 June, of which only 4 per cent have already made their bookings. 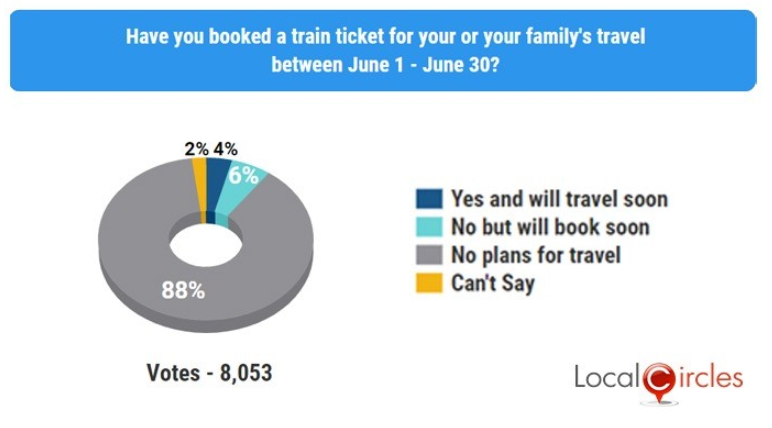 “One or more members of only 10% households will likely be taking a train in June,” the survey stated.

Feedback from train travelers also reveals similar reasons for travel. “With train providing better point to point connectivity than flights especially in Tier 2, 3 and 4 towns, people will be travelling but the reason is once again either to get home or to be with family that may be unwell or high risk.”