Covid-19 Impact: Only 16% MSMEs and Startups Will Survive Over 3 Months

According to a survey by LocalCircles, small and medium enterprises (SMEs) and startups are fast running out of cash to continue business operations even as country gets back in action in Unlock 1.0

By Shipra Singh June 17, 2020
Opinions expressed by Entrepreneur contributors are their own.
You're reading Entrepreneur India, an international franchise of Entrepreneur Media.

Even as the country is gradually coming back to action in Unlock 1.0, small businesses and entrepreneurs continue to grapple with cash flow challenges. According to a survey conducted by community platform LocalCircles, 42 per cent small and medium enterprises (SMEs) and startup respondents said they have less than 3 month’s worth of cash left to continue business operations.

The situation is grimmer for others, as 38 per cent reported to have run out of funds, while another 4 per cent have shut shops completely due to the impact of Covid-19 enforced lockdown. The report says that many businesses have reported a revenue drop of more that 80-90 per cent in the last two months, making it hard for them to sustain. 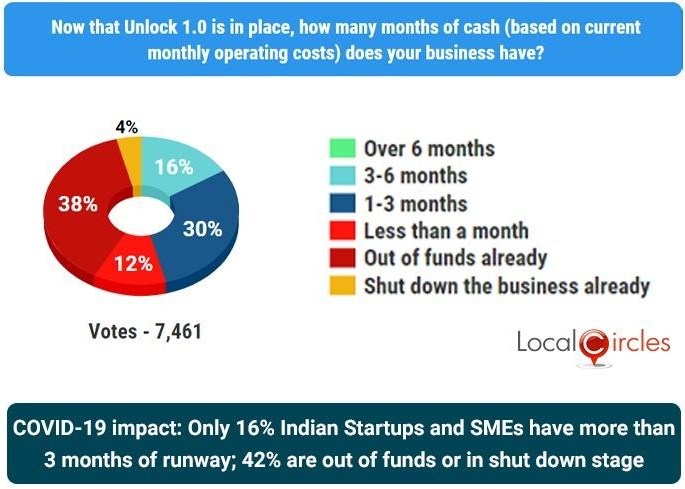 In the last three months, businesses have taken several cost cutting measures to sustain themselves. From cutting marketing costs to deferring expenses on human resources to downsizing workforce, enterprises have been forced to relook their budget to create a long runway for the coming months.

Despite such drastic steps, the percentage of startups and SMEs that have run out of funds has risen from 27 per cent to 42 per cent from April to June, as per LocalCircles. 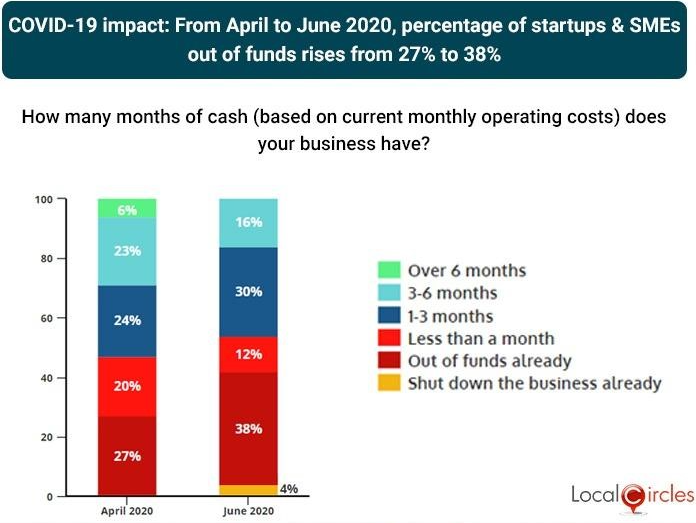 That’s not all. About 14 per cent businesses fear that they might have to shut down in the coming six months.

For most, growth plans have taken a backseat as they struggle to stay operational. On being asked at this junction of Unlock 1.0, what do they see happening with their business in the next 6 months, 35 per cent said they would be scaling down, whereas 16 per cent are unsure of the future. 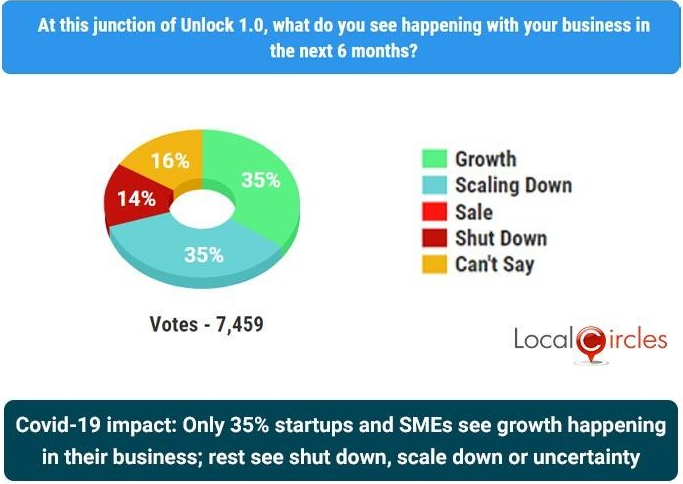 However, the silver lining is that the percentage of startups and SMEs that are expecting growth in the next six months has risen from 13 per cent in April (start of lockdown) to 35 per cent in June. The survey states this increase in growth prospects indicates that some businesses may have found new revenue streams.

The cabinet has approved INR 3 lakh crore emergency credit line for MSMEs but a majority of startups might not be able to avail it due to underlining terms and conditions. “A startup needs to have existing debt on their books to qualify, but most startups usually opt for VC funding, which makes them ineligible for this government scheme,” the report stated.

“While the Atmanirbhar Bharat stimulus has big numbers, how quickly startups and SMEs can see money in the bank remains the big question. For most of them, they can’t afford to chase the paper work and loans/funds for months and still sustain their business.”