Learn how to enhance your leadership skills from EY World Entrepreneur of the Year 2020 Kiran Mazumdar-Shaw who has succeeded in managing, influencing, and inspiring the business world for nearly half a century.

By Tamara Pupic June 22, 2020
Opinions expressed by Entrepreneur contributors are their own.
You're reading Entrepreneur Middle East, an international franchise of Entrepreneur Media.

The third edition of the Entrepreneur Middle East Live webinar series Against All Odds will look into why flexibility is an important factor enabling leaders to readily respond to changing circumstances.

There is no "one size fits all" leadership approach, but entrepreneurs such as Kiran Mazumdar-Shaw, founder and Executive Chairperson of Biocon, India’s leading biotechnology enterprise, have a proven ability to change, remain open to new ideas, and proactive during times of transition, and thus seem to always be able to produce vital outcomes for the business.

With over 40 years of experience building and growing Biocon, Mazumdar-Shaw can share many lessons on how to overcome skepticism and discrimination as a young female entrepreneur, how to use homegrown talent to make breakthroughs in science, how to keep reinventing a science-based enterprise in order to keep it afloat due to very limited resources, and much more. 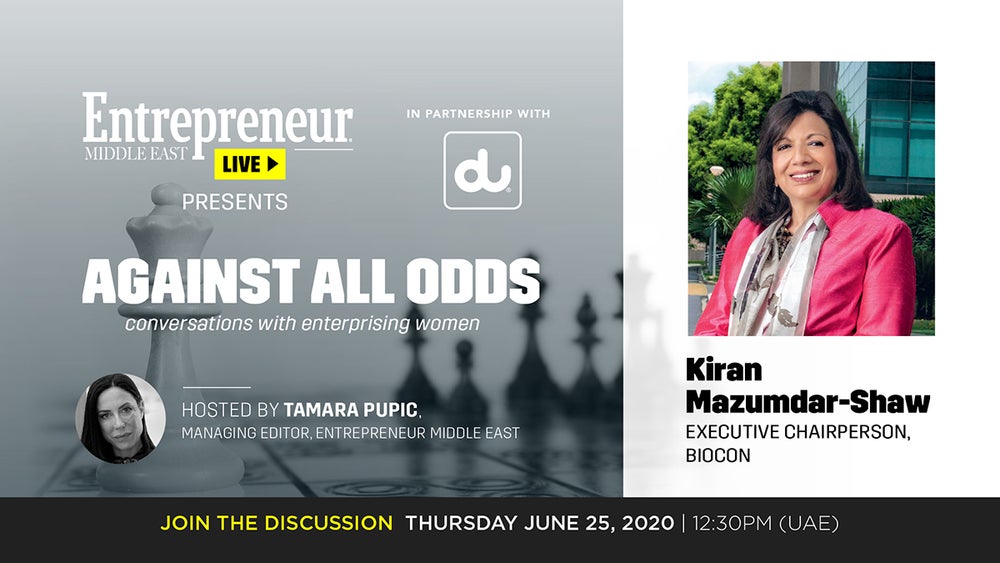 As someone who has been declared "India’s richest self-made woman," Mazumdar-Shaw is globally recognized for building a company that is committed to innovation and affordability in delivering best-in-class therapeutics to patients across the globe.

She has been named EY World Entrepreneur of the Year 2020, while her accolades also include being ranked among "World’s 25 Most Influential People in Biopharma" by Fierce Biotech, Fortune’s "Top 25 Most Powerful Women in Asia-Pacific" and Forbes' "World’s 100 Most Powerful Women" as well as the only Indian on its list of "World’s Self-Made Women Billionaires."

In January 2020, Mazumdar-Shaw was honored with the Order of Australia, Australia’s Highest Civilian Honour, for her significant service to advancing Australia’s bilateral relationship with India. She was also conferred with the highest French distinction – Chevalier de l’Ordre National de la Légion d’Honneur (Knight of the Legion of Honour) in 2016.

She was also bestowed with The Global Leadership in Engineering Award by Los Angeles based USC Viterbi, School of Engineering in 2016 for excellence in biotechnology worldwide. The U.S.-based Chemical Heritage Foundation has conferred her with the 2014 Othmer Gold Medal and the Germany-based Kiel Institute for the World Economy has awarded her its coveted 2014 Global Economy Prize for Business.

She has received two of India’s highest civilian honours, the Padma Shri (1989) and the Padma Bhushan (2005) as well.

Staged in partnership with du, the webinar will be held at 12:30pm (UAE time) on Thursday, June 25, 2020. To register and reserve your spot, please click HERE.