For The Greater Good: Basma Altwejri's New Book, "From Society, For Society," Looks Into Social Entrepreneurship Across The MENA Region

With the intention to give an unbiased, holistic view of how innovative yet socially responsible practices across different industries work, Altwejri's book tells the stories of people from across the social entrepreneurship spectrum.
Next Article

Over the years, through her volunteering work at charities and other non-profit groups, Basma Altwejri, founder of the Pay It Forward social initiative that was developed in March 2016, observed that social entrepreneurs exhibit certain characteristics that seemingly set them apart from other entrepreneurs and CSR initiators. “I noticed in my experience that a lot of entities don’t focus on solving the root cause of the issue, but rather the resulting symptoms; while social entrepreneurship is experimental and emphasizes highly on involving the beneficiaries in identifying the challenges they face, and the solution that will be developed for them,” says Altwejri, who is also a program analyst in the policy design and advocacy department at King Khalid Foundation in Saudi Arabia, and now, the author of From Society, For Society, a book in Arabic that discusses the stories of 16 people involved in social entrepreneurship.

An English version is already in the works, as per Altwejri. When asked to give a brief summary of the contents of her book, she replies, “The book has three sections: the first one features lessons I gained through starting my social initiative Pay it Forward, and how I found my area of interest to guide readers to find and follow their passion,” she says. “In the second part, I interviewed 16 leading social pioneers and advocates who contributed to different causes to share their journeys and insights. The third section is the practical aspect of how, which was a collaboration with Ethmar Center For Social Entrepreneurship, in which they simplified design thinking, the theory of change, and the social business model canvas comprehensively to guide readers on how to transform their ideas into visible projects and actualize their vision of change.”

With the intention to give an unbiased, holistic view of how innovative yet socially responsible practices across different industries work, Altwejri set out to tell stories of people from across the social entrepreneurship spectrum. One such story featured in her book is of architect cum entrepreneur Samira Taye, who helped renovate schools and offer students and educators a better, safer teaching environment through her volunteer group Ihyaa. Another featured discussion is that on Mouna Othman, the co-founder of Naqaa, a sustainability solutions venture that has designed recycling programs for more than 100 companies. “Through sharing their stories, we hope to encourage a culture of specialized voluntarism, instead of organizational-based volunteerism, to achieve a greater impact,” says Altwejri.

Related: For The Love Of Books: A Peek Into The Business Of Publishing 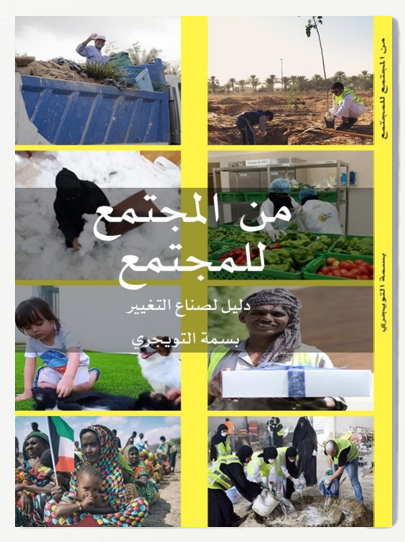 A key point that is constantly highlighted by Altwejri is the financial stability that most social entrepreneurship ventures supposedly achieve during their work. “Social enterprises focus on being financially sustainable instead of the constant cycle of requiring donations to continue their operations and deliver their impact,” she adds. “I did indeed notice that social entrepreneurs share similar traits, they have a sense of curiosity about both the challenge and the people affected by it, their bold, resourceful, adaptable, strategic and most importantly determinate.”

All these observations and research work have also helped Altwejri identify glaring loopholes in the corporate CSR structures within the MENA region. “I think one of the major problems is that CSR initiatives are often treated as a secondary thought, and I do understand that usually companies have a lot of internal challenges and priorities that they have to deal with, but as the term indicates they have to remember that they are responsible on the effect of their operations and that they are ethically obligated to at least not harm any of their stakeholders in terms of environmental impact and also their entire supply chain starting from their employees, suppliers and marginalized producers and workers making sure their working in safe conditions and being paid fair wages,” she elaborates.

When asked if she had any tips to share on how to better the current CSR initiatives, Altwejri says she has plenty. “When nonprofits or advocates like me say they want companies to do more, businesses usually assume more money has to be donated (which is a pivotal contribution), but they can make a positive difference in other ways too. Companies can simply facilitate the good-doing.” She further adds to the discussion, saying that outsourcing a company’s operational needs to foundations or groups that benefit the underprivileged is an excellent choice of an effective CSR initiative.

With such a wealth of knowledge at her disposal, Altwejri hopes to continue her work in this field, and already has plans for upcoming projects. Her hope for her current book is simple: for a wide audience to read it, whether simply as a self-development book, or as a guide on how to run a non-profit, social initiative. “I sectioned it clearly and sequenced it so both target readers can have an uplifting beneficial read in the topics they're interested in. The hard copy of the book is currently available in Kinokuniya, Jarir, Jamalon, and Aladab bookstores, and I’m working on launching both the electronic and audio versions to accommodate all reader’s preferences, as well as make it inclusive for visually impaired people.”

Related: Five Tips For Starting A Business In The UAE's Publishing Sector

All Entrepreneurs Have 2 Opposing Mindsets. Which Is Right for You?

My Book and Baby Are Due the Same Day! Follow Along on My Journey. Episode 9: My Due Date