In comparison to the G7 nations-France, Italy, Japan, Germany, the US, Canada and the UK- India has reported steepest fall in economic growth in the April-June quarter of this fiscal year

By Shipra Singh September 1, 2020
Opinions expressed by Entrepreneur contributors are their own.
You're reading Entrepreneur India, an international franchise of Entrepreneur Media.

The Covid-19 pandemic has capsized the world economy, completely eclipsing the impact of the 2008 global economic financial crisis.

Economies throughout the world have recorded historical decline in their growth figures, as Covid-19-led lockdown restrictions impacted business activities, consumer spending and trades.

India’s GDP suffered an unprecedented contraction of 23.9 per cent in the April-June quarter, its worst fall on record, as shown by data from Ministry of Statistics and Program Implementation (MOSPI). Also, this is the first contraction since India started reporting quarterly GDP data in FY1997.

In comparison to the G7 nations—France, Italy, Japan, Germany, the US, Canada and the UK— India has reported steepest fall in economic growth in the first quarter of this fiscal year. This is how growth figures of these countries look for the April-June quarter:

France’s GDP shrank by a dramatic 18.9 per cent, steepest decline among the 19 Eurozone nations.

Italy recorded a sharp correction of 17.7 per cent amid the coronavirus lockdowns. As per the data from the government agency that reveals the country’s official statistics, this is Italy’s lowest growth figure since 1995.

Japan’s GDP saw a dramatic decline of 9.9 per cent, which is the worst contraction for the country since 1980.

Germany reported a contraction of 11.3 per cent in its GDP.

Covid-19 led economic woes contracted the US economy by 9.1 per cent in the April-June quarter, largest decline since comparable data became available in 1947.

CEIC data showed that Canada’s GDP fell by 13 per cent.

Coming nearest to the Indian figures, the United Kingdom recorded a contraction of 21.7 per cent.

Indian economy had already been ailing in the last few quarters before Covid-19 pushed it into a free fall.

The preceding January-March quarter recorded GDP growth of 3.1 per cent, down from 4.1 per cent in the Oct-Nov quarter. To compare with April-June 2019 quarter, GDP grew by 5.2 per cent, while the FY20 growth was the slowest in eleven years at 4.2 per cent. 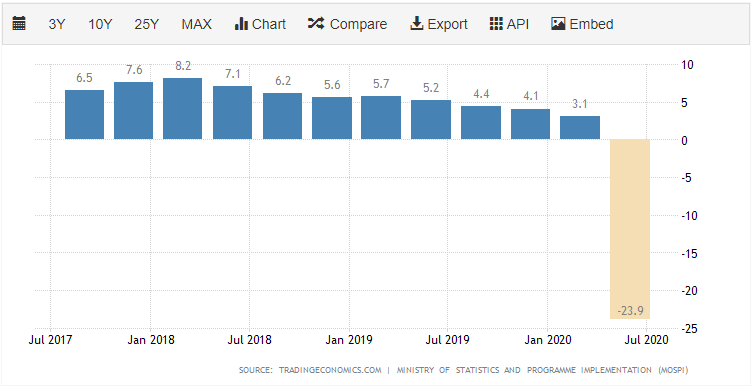 Looking deeper into the sectoral data, construction industry is the worst hit having recorded a massive contraction of 50.3 per cent. After construction, hotels and transportation recorded second biggest fall of 47 per cent, followed by manufacturing contracting by 39.3 per cent, as per MOSPI.

In August last week, Moody’s Investors Service said it expects India to record a strong pick up in real GDP in the second half of 2020. The rating agency also retained its projection of 3.1 per cent growth contraction for the country.

Enable the Creation Of a High-Trust, High-Performance Economy