This Startup Sells Second-Hand Two-Wheelers; Assures Buy Back Within 12 Months

Indians love two-wheelers. The sights on roads pretty much proves the point. Less expensive, easy to maintain, and perfect for short rides within the city are three main reasons driving the large sales numbers of two wheelers. For the financial year 2019-20, according to a SIAM report, India sold around 17.5 million units of two-wheelers in comparison to just around 2.7 million units of passenger vehicles.

However, over the time, high tax rates and addition of advanced technology has pushed the prices on the expensive end, making it difficult for the masses, thus forcing them to look for an alternative. Apart from these, India being a low disposable income country, second-hand two-wheelers fit their yearly expense book.

But, the used vehicle market in the country is fragmented and unorganized, and has been infamous for giving poor user experience. To address this issue, three IIT-Bombay graduates - Nikhil Jain, Sumit Chhazed and Nittin Mittal founded CredR in 2015.  Chhazed and Mittal left in 2017.

In an interaction with Entrepreneur India, Sasidhar Nandigam, who is Chief Strategy Officer and co-founder of CredR, shares the genesis behind the startup and how they were quick to recover.

Going down the memory lane, Nandigam shares that in 2015, Jain who was about to complete his course from IIT Bombay was looking for a second-hand two-wheeler to purchase. Nandigam said Jain scoured through popular classifieds like OLX and Quikr to find a viable option.

“Back in those days, if you dropped your contact numbers to any of the classified websites, you would get a slew of calls from dealers,” he said.

Jain bought a used bike worth INR 50,000. Nandigam said Jain was not given any bill and within three days his bike stopped working. The dealer unflinchingly denied the existence of the deal. Shocked by the behavior, the founders went back and tried to understand this market. They conducted a market research and found that almost all the customers had similar experiences. This is when they decided to create a consumer brand which will help customers to purchase  second hand two-wheelers hassle free. They launched CredR on February 14, 2015. The startup has recently raised INR 14.7 crore from Eight Roads Investments and ON Mauritius. Earlier it raised $6 million from Omidyar Network.

While launching the startup, Nandigam said that they wanted to provide a ‘kickass customer experience'. “Customer satisfaction is at the core of our business,” added Nandigam. The company when started acted as a coordinator for second-hand dealers and potential buyers. The company used to list bikes from multiple dealers on their website, and when a buyer showed interest, someone from the company would direct them to the dealer directly. 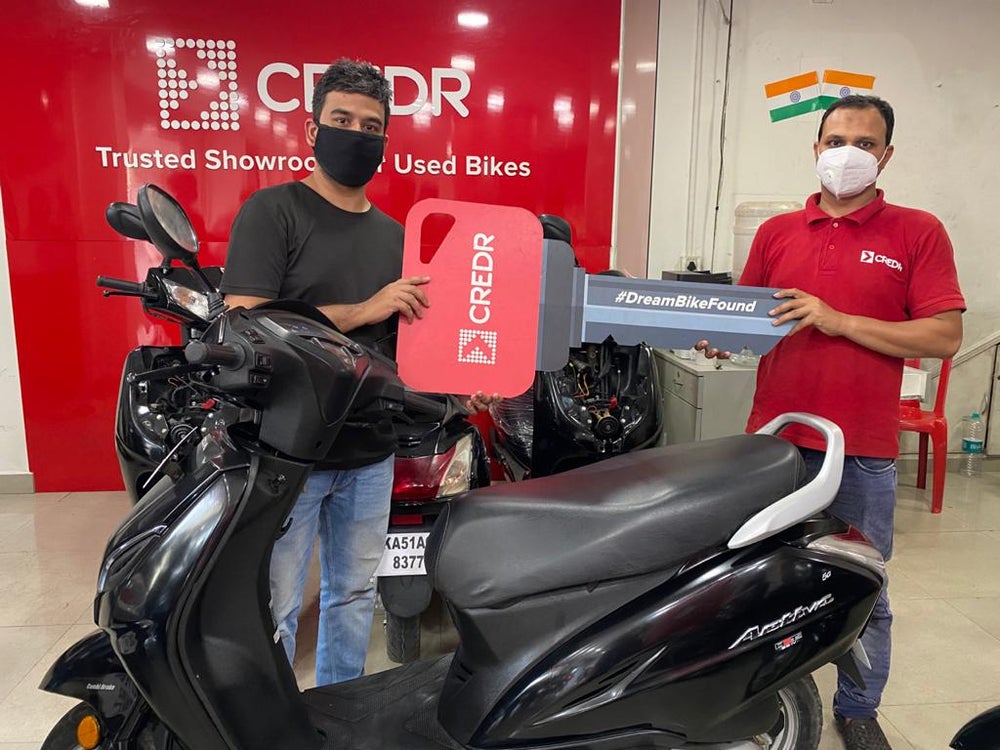 However, the founders realized that this business model was actually attracting bad user experience and was against their very idea of the startup. This is when in 2018, they opened their own showrooms and standardized the customer user experience. The company currently operates across major cities like Pune, Bengaluru, Delhi NCR, Jaipur, Kota, and Hyderabad through the franchise model. These showrooms offer customers with a wide range of used refurbished two-wheelers at the best prices. Using its proprietary technology and full-stack vertically integrated business model, CredR aims to provide a rich customer experience. The startup promises to provide 60-70 per cent of  buyback amount to its customer within a span of 12 months. It also provides six months warranty on engine and gearbox along with seven days buy protection to address any minor issue. CredR currently has four warehouses in four cities which houses around 500-600 two-wheelers.

A buyer can choose a two-wheeler from the website and complete the payment to get their vehicle delivered at his doorsteps or he can visit the showroom. Apart from these, a customer can also sell her two-wheeler directly or can even exchange it to buy a new bike/scooter. Recently, the startup has also collaborated with Ampere EV and Gemopai Electric in selected cities to provide price quotes for used petrol two-wheelers to streamline the exchange process.

Pandemic and Its Effect

As for the rest, April was bitter for Nandigam as the country was under lockdown with no requirement for travelling. However, once people had the reasons to go out they looked for personal vehicle options. Nandigam said as the public transport came to a halt  and was unsafe amidst the outbreak, their sales picked up gradually. According to him, in May, they recovered 50-60 per cent in terms of pre-COVID sales and fast forward to September they are back to 80-90 per cent of pre-COVID levels and are now low eyeing the festive season for complete recovery.

Nadigam said they are currently aiming for 10 to 20 per cent of sales growth by the end of this financial year instead of 200 per cent due to the pandemic.