That's why he founded BrandXR, an 'extended reality' startup, in his home state of Michigan.
Next Article Add to Queue

Let the business resources in our guide inspire you and help you achieve your goals in 2021.
Brought to you by Entrepreneur Partner Studio Staff


Mahmoud “Moody” Mattan’s passion is helping businesses tell better stories and build better products. But not in any conventional way. He believes that Augmented Reality (AR), Virtual Reality (VR), and Mixed Reality (MR) is the key to creating compelling, immersive experiences. That’s why he founded BrandXR, a platform on which virtually anyone can create AR/VR/MR for themselves.

Mattan’s foray into business began at a young age growing up in Dearborn, Mich., about 20 minutes west of Detroit. As a teenager, he worked at various family-run businesses in the area, including restaurants, travel companies, food distribution and real estate businesses.

“Entrepreneurship is in my DNA and it’s the same story for other second generation Arab-Americans with similar upbringings,” Mattan says. Metro Detroit is home to one of the largest Middle Eastern populations in the U.S. and has a “buzzing” small-business community, he says. Mattan’s father emigrated there from Syria as a young man and that’s where his family settled.

After attending college at Wayne State University in Detroit, Mattan left Michigan to earn an MBA and pursue a career in venture capital and business development. He ventured out to major tech hubs like Boston and San Francisco, and abroad to places like Jordan and Malaysia. While working at a venture capital firm in Silicon Valley, Mattan invested in an AR headset startup and he immediately became fascinated by how immersive technologies could change the way people can interact and do business.

Mattan then founded a company called PowisVR, which eventually became a multi-million-dollar virtual reality headset and mobile accessories business. It was there, while working with numerous brands, that many wanted to use VR for applications like marketing content and visualizing product development.

That’s when the idea for BrandXR was born. Mattan founded the company in November 2016 to “help businesses cut through the digital noise and deliver compelling and impactful experiences,” he says. With the BrandXR Studio, brands are able to create their own AR/VR/MR applications without the need for a development, engineering, or IT team.

“We have assembled a team of the brightest and hungriest minds in 3D, artificial intelligence, AR/VR/MR and game development giving our clients access to cutting-edge technologies and distribution in the world,” Mattan says.

Having traveled the world, it wasn’t Silicon Valley or New York or Berlin where Mattan wanted BrandXR to be based. “I realized that I could build a big tech company anywhere in the world, so I decided to come home and do it in Michigan,” Mattan says. “I wanted to be close to my family and set an example for future entrepreneurs to follow.”

It makes sense. Michigan is home to hundreds of startups across a broad cross section of the technology world. Michigan is a top 10 state for net tech employment, net tech jobs added, and share of workers in tech industries—and some of the world’s largest tech companies are investing throughout the state. Today, BrandXR has offices in Ann Arbor, Mich., as well as Orlando, Fla. 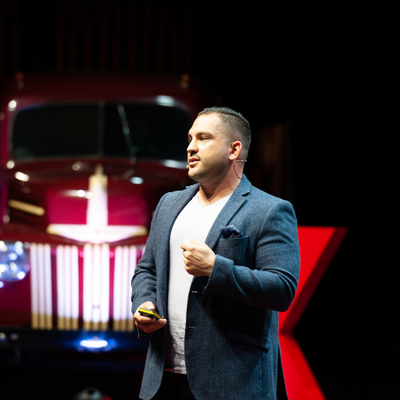 “The entrepreneurial ecosystem in Michigan is small but mighty,” Mattan says “Everyone knows each other from Ann Arbor to Detroit and is collaborative and helpful. We share advice, ideas, resources, and war stories with other startup founders who are going through the same challenges.”

That ecosystem has played a large part in BrandXR’s growth, too. In addition to the mentorship and moral support, BrandXR has been awarded nearly $100,000 in state grants, accelerator funds, and local innovation competitions.

“Michigan has been a hub for entrepreneurship for as long as I can remember, it’s just flown under the radar,” compared to places like Silicon Valley, New York, or Boston, he says. When it comes to tech, Michigan ranks in the top 10 nationally for degrees awarded in computer science, engineering, and mathematics.

“Michigan has always been good at building physical products but now it’s undergoing a digital technology entrepreneurship boom, where tech startups are starting to attract more attention from customers, employees, and investors,” Mattan says. There’s no other place he’d rather do business.