The athlete spoke at INCmty2020 about how inspiration and being realistic about his own talents brought him to the big leagues.

By March Violante November 3, 2020
This article was translated from our Spanish edition using AI technologies. Errors may exist due to this process.

Few know, but when Terrell Owens grew up in a poor Alabama neighborhood in the 1980s, he wanted to be a basketball player. Ironically, fate had prepared another path for him: to be inducted into the NFL Hall of Fame as one of the best receivers in the history of the league.

“He was a skinny kid from Alexandria, Alabama, who loved basketball and looked up to Michael Jordan. I didn't start playing soccer until I was 14 years old in high school, but I didn't know that one day I was going to play professionally ”, said the athlete at the beginning of his conversation with Juan Murra, rector of Professional and Graduate Studies of Tec de Monterrey at INCmty2020.

Raised by his mother and grandmother alongside his brothers and sister, Terrell had only one thing really clear on his mind: he wanted to be relevant. However, when he started working on the school team, he realized that his teammates were better players than him and that therefore he had to work a little harder.

"It is through sports that a child can learn the concept of teamwork, recognize that there are things he can and cannot do, evaluate when to give a little more," said the athlete.

When he was on the high school team, Owens shared a jersey with 90 other guys and he didn't really stand out much. By his own account, he was late in development, but was fortunate that when the recruiters approached his school, they were looking for a receiver, but they saw something worth exploring in him. This earned him a scholarship to the University of Chattanooga and from there his career began to flourish.

“I started to believe a little in myself. I knew I was not as good as everyone else, but I understood that if I put in the right effort and surrounded myself with the right people, I would start to forge my path, "said Owens.

However, not everything was honey on flakes for the player. When he reached the professional league, the draft was not the first pick. He ended up being chosen by the San Francisco 49ers, but that stuck start caused him great doubts.

“When I talk about the people who helped me become the receiver that I am, there are great coaches. One of them was San Francisco coach Larry Kirksey. During my third year there, I was struggling to get the best out of my game. He knew I loved basketball so he said to me, 'Imagine you're playing one-on-one with the player from the other team blocking you. You have to see beyond him, ”Owens recalled.

The athlete points out that although it seems like a cartoon anecdote, that explanation worked for him since he “turned on a light bulb in his brain” to understand what he should do to improve. However, it was not something that happened out of nowhere, but that moment taught him where he had to work to start improving.

“You've probably heard it many times, but it's real: you have to get out of your own way. You can overanalyze things and that is why you need to have people around you who can give you a good perspective of what is happening with you.

For Terrell, this path translated into a philosophy that can be applied both in the field and in everyday life.

"When I was first nominated for the NFL Hall of Fame, I didn't really understand how great that honor was," says Owens, recalling that as a child he didn't watch much television because his grandmother was strict. “I was not playing to get to the Hall of Fame or knowing that I would be 15 years in a national league; but at the time of the nomination, I didn't know that I had accumulated the statistics that put me in the best moment of my career ”.

Owens had to give many interviews after this nomination and it was then that, watching the broadcasts, he reflected all the way he had really gone to get where he was.

He wondered how the skinny boy from Alabama got there and developed his philosophy of 3 D's: Desire, Dedication, and Discipline.

This became a mantra for Owens, who while he never won a Super Bowl, he did not let it affect his mindset.

"Even though I'm not a champion in the books, I always played like I was."

Anyone can use those 3D, whether you are an athlete or not.

You must find joy in what you do

Working very hard is a basic ingredient to being successful and making your mark on the world, but it's worth nothing if you don't enjoy what you do. At least that's what the former NFL player thinks.
“You must find joy in whatever you do. If you don't enjoy it, then everything you do, no matter how much you love it at first, it will just become a job that won't thrill you. "

If you find joy in what you do, says the athlete, the results will find you.

Recalling some moments in his career where he was criticized, Owens pointed out the importance of believing in yourself, not just one day not understanding that you deserve to be better.

“There is no magic rule for being better. It's simple: you want it or not ”.

Terrell points out that the secret for him was being realistic; know that he was not as good as the others. So he always took every opportunity to work extra to improve and ask questions.

“When my classmates went on trips in the summer when I was in college, I couldn't afford that. So I used that time to go to the school gym to improve my physique. "
Given this, Terrell stresses that every effort adds up. You may not see the results you want immediately, but little by little you will be preparing to take advantage of the opportunities that are presented to you and that you have dreamed of.

“Many people think they deserve something and maybe they do, but life may just not give it to you. Keep working and working so that you can build your own path ”.

During his career, Owens was widely criticized for certain actions or for being very vocal in his opinions. Asked how I handle it, the former NFL player simply said: The opinion of others is not your problem.

“My grandmother raised me to identify right from wrong. And in my life I have learned that you will not always like everyone, "he said. "People are going to talk about you one way or another, but at the end of the day, you have to let your work on and off the court speak for themselves." 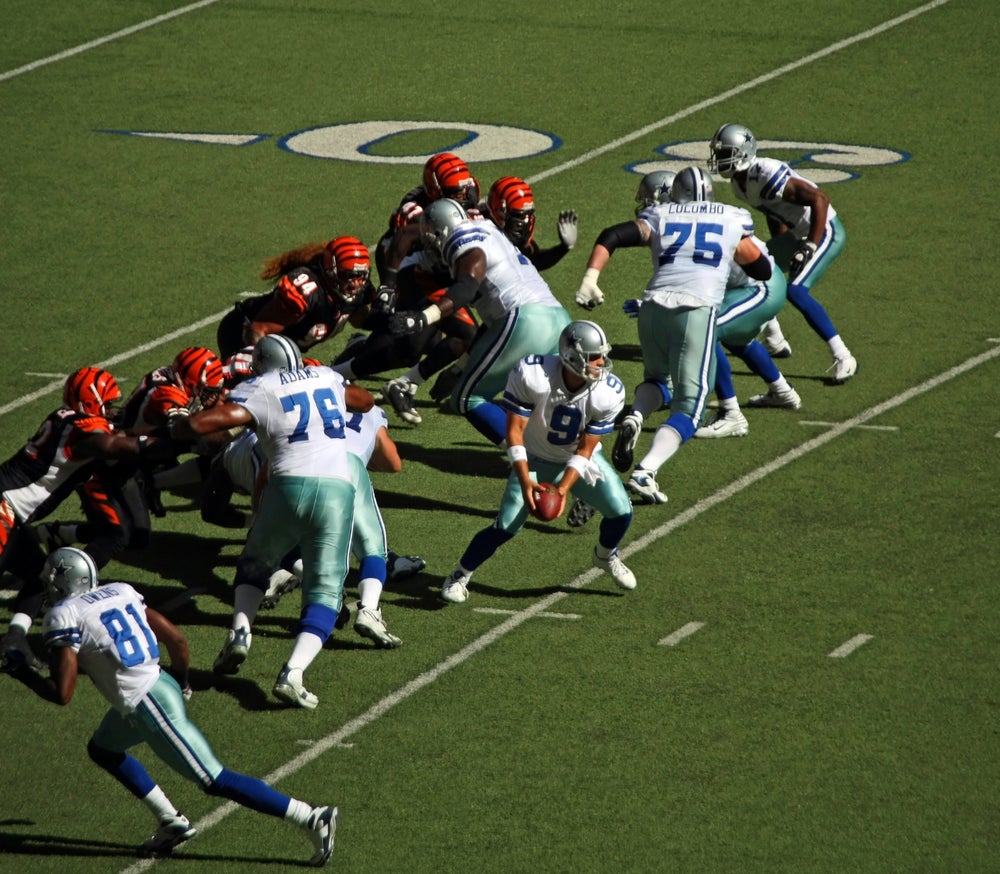 Owens in the field / Image: Depositphotos.com

Talking on a historic day

This talk by Terrell Owens before thousands of people connected to the INCmty takes place on the same Tuesday as the presidential elections in the United States. In this regard, Owens - who is in one of the key states for the contest, Florida - pointed out that this vote is about the future.

“That's why people voted early in record numbers and today they are lining up at the polls, because they are voting for their children and grandchildren. No politician is going to be 100% good, but it's about finding the person who works for the American people. "

He noted that he personally does not care who is in charge as long as it is a person who understands the importance of democracy, decency, compassion and empathy.

“After what happened with George Floyd and being an African-American father, I couldn't keep quiet,” reflects the athlete. “I am not a politician, but at the end of the day it is about simple human decency. To recognize between what is good and what is bad ”.