Bad bosses ARE ABOUND, but successful people know how to handle them to get the most out of the situation.
Next Article

Travis Bradberry
Bestselling author of The Seagull Manager
menu_book
This article was translated from our Spanish edition using AI technologies. Errors may exist due to this process.
Opinions expressed by Entrepreneur contributors are their own.

Bad bosses pollute workplaces. Some do so openly, while others manipulate their employees to use them as mere instruments of their own success.

Regardless of their methods, bad bosses do irreversible damage to their companies and employees by preventing them from performing to their full potential and by creating unnecessary stress.

One of the greatest skills a person can develop is the ability to neutralize toxic people, even those to whom they have to report. It is not easy and requires a lot of emotional intelligence.

The most obvious solution to dealing with a bad boss is to find another job, however, this is not always possible. Successful people know how to make the best of a bad situation and do not allow a bad boss to stop them because they know that success comes from learning to play to the maximum with the "cards" that life gives them.
Here are the six most common types of nefarious bosses and the best strategies for working with them.

1. The inappropriate "buddy"
It is the boss who is too friendly and not in the way that could help build a good team. He invites you out for a drink outside of work hours and he's gossipy. Use your influence to make friends at the expense of your job. He has favorite employees and creates divisions among workers who are often frustrated by an imbalance of attention and respect. You can't make tough decisions like firing those who need to be fired (unless they are people you dislike).

How to neutralize it: the most important thing with this type of boss is to set very clear limits. Don't let him use his position to intimidate you. You can take control of any situation by consciously and proactively setting a limit. For example, you can remain polite to your boss throughout the day while not being afraid to say no to his invitations to drink with him while leaving work.

The difficult thing here is to maintain continuity with your limits, even if your boss insists.

It is important that you do not set limits that make you look like an unapproachable person. It's better for this type of boss to see you as an ally than an enemy.

2. The micromanager
This type of boss makes you feel like you are under constant surveillance. They are the kind of people who, if they tell you that your handwriting could improve, waits until you leave to throw away your pencils and replace them with pens so you can write better. It is capable of giving you a 20 page report back because you used a paper clip instead of a staple. The micromanager pays too much attention to small details, and his constant vigilance leaves his employees disappointed, frustrated and even uncomfortable.

How to neutralize it: Successful people approach micromanagers showing that they are flexible, competent, disciplined and open to constant communication. Micromanagers naturally reach out to employees who produce jobs as they envision it. The challenge with micromanagers is to find the “vision” that these bosses have and then fulfill it.

The trick is to ask specific questions about the project they leave you, have constant reviews, and see if your boss's feedback follows specific patterns. Of course, this does not always work. Some micromanagers never stop looking for something to overanalyze and criticize. When this is the case, you should seek satisfaction with your work within yourself. Don't let your boss's obsession with details provoke feelings of little value in yourself because that will only create stress. Remember that a good report without a staple is still a good report.

3. The tyrant
This boss uses Machiavellian tactics to constantly feed his ego. His primary concern is maintaining power and he will manipulate and intimidate whoever is necessary to do so. The tyrant believes that his employees are a gang of pirates inside his ship. It ranks people in its head and treats them according to its own judgment: those employees who challenge its thinking are the enemy seeking to provoke a riot. Those who support him become "first admirals", while those who do not perform as well as they should are condemned to "wash the deck and carve the latrines."

How to Neutralize It: A painful, but effective way to deal with tyrants is to present your ideas in a way that allows them to take some of the credit. A tyrant can maintain his ego without having to limit your ideas. Always give them some recognition even if they never do the same for you. Also, you have to choose your battles wisely to survive such a boss. If you can manage your emotions, you will be able to rationally choose when to fight and when to let him win.

4. The incompetent
This boss was hastily promoted or hired without knowing if he was capable of holding the position. Not that he's completely useless, but there are people on his team who have been with the company longer and have the information and skills that he lacks.

How to neutralize him: Most likely, if you are frustrated with having this type of boss, it is because you have the skills that he lacks. It is important to swallow your pride and share your experience and knowledge without showing it off. In this way you will become their ally and confidant.

5. The robot
In the robot's mind, you are employee number 72 who generates a level 84 production and has an experience of 91 points. This boss makes decisions based on numbers and when forced to take action without the necessary figures, he destroys himself. You make no effort to connect with your employees and only look at the percentages to decide who is valuable and who is not.

How to neutralize it: you need to speak its language. Make sure you have as many figures as possible to support your ideas. You also need to find out what things they consider valuable and show them that you can deliver on them. Once you do that, you can start trying to get him out of his antisocial comfort zone. The trick is to find ways to connect directly with him without coming across as rude. Respond to his emails directly at his office so that he begins to identify you beyond a number. Just because you are interested in numbers does not mean that you cannot be the exception. Do it in moderation because it is likely that it will not respond well to a "social assault."

6. The visionary
The strength of this boss is based on his ideas or innovations. However, it lacks the leadership necessary to implement these plans. When it comes time to execute on one of his big ideas, he's already planning something else and leaves it up to you to figure out how to make his original vision come true.

How to Neutralize It: The best way to deal with these types of employers is to "disarm" the way you think. These bosses have a very general vision of things so your duty will be to focus it on practical actions. To do this, you must ask him many specific questions to force him to consider the real obstacles to his plans. Do not throw your projects directly, instead focus your attention on what will be needed in a practical way to achieve your ideas. Many times these questions will dilute these bosses' unrealistic plans, but when they don't, you'll have to make them understand that it will take a lot of real effort to make their vision happen.

7. The seagull boss
We have all had a boss like this: the one who is always absent and one day decides that it is time to work, makes some changes to the project in turn and gets angry when they do not understand the progress of the project. Rather than taking the time to look at the facts and work hand in hand with his team, the Seagull boss just throws in a bunch of formulaic advice and then drops the job. In fact, seagull bosses only interact with their employees when a crisis needs to be solved and many times they make the situation worse by not knowing how to work with their team.

How to neutralize it : The best way to work with these bosses is to do it as a team. If you can get all the employees to sit down with him to explain that his abrupt meddling is not considering all the facts of a long-moving project. Many times, seagull bosses don't know where they are going wrong and when you point them out in the right way they usually change for the better. 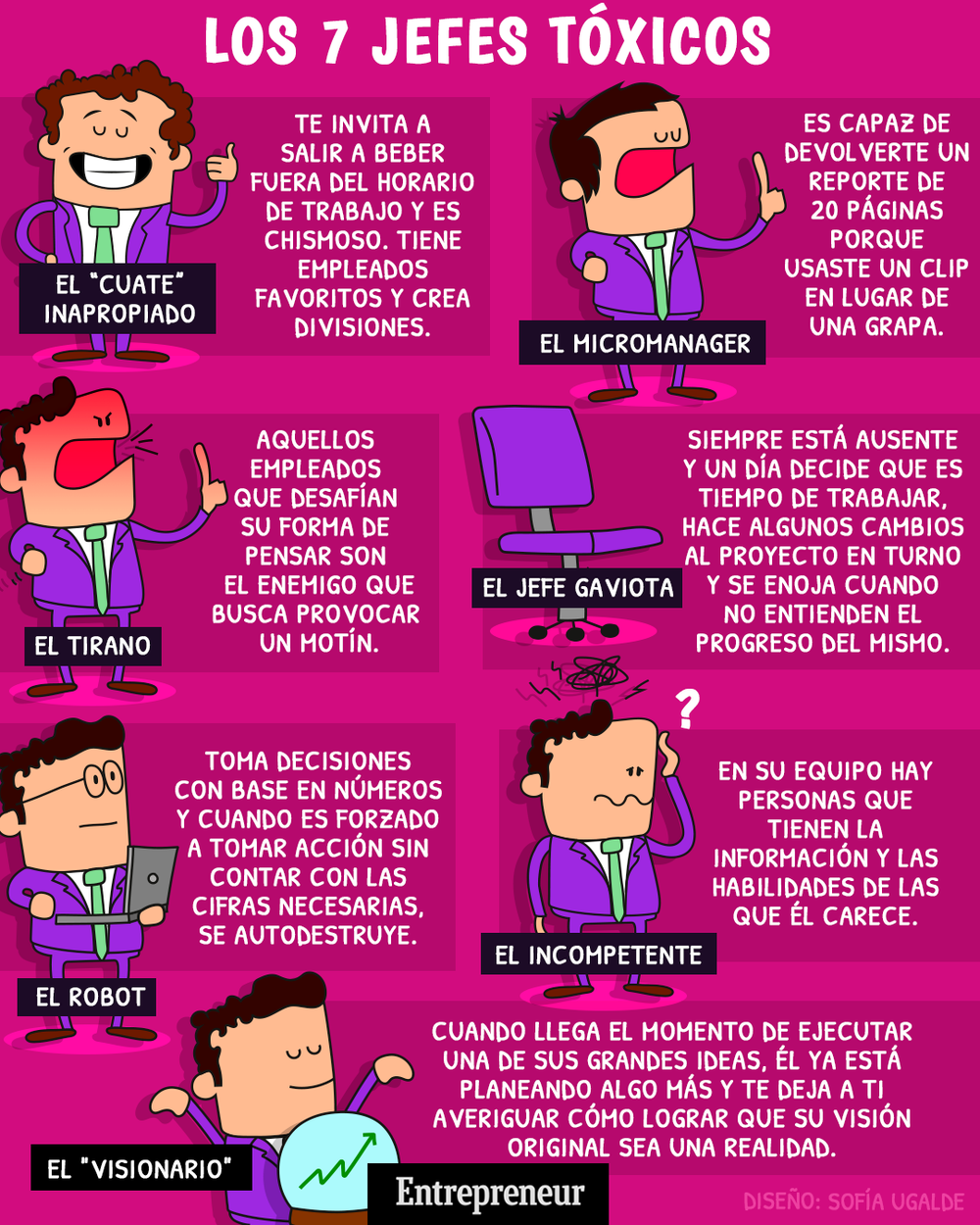