Everything related to the founder of Apple causes great interest, but the characteristics of this letter from 1991 make it a valuable object of desire.

By Entrepreneur en Español December 17, 2020
This article was translated from our Spanish edition. Opinions expressed by Entrepreneur contributors are their own.

An extremely rare letter signed by Steve Jobs is up for auction and could fetch a price tag of $ 25,000. It's about the stratospheric job offer that the Apple founder sent Del Yocam in 1991 , offering him the position of president and COO of NeXT Computer Inc.

“Letters signed by Steve Jobs are very rare. We've been in business for over 40 years and this is the first we've seen , ”Bobby Livingston, executive vice president of RR Auction , the Boston-based auction house in charge of the bid , told Fox Business.

In the letter, Jobs offers Delbert W. Yocam a salary of $ 250,000, 660,000 NeXT common shares and support to join the company's board of directors, among other benefits.

"On the signature line is written: 'I accept this incredibly great offer!' This last sentence became a kind of motto for Jobs to introduce the Macintosh, ” reads the RR Auction website . 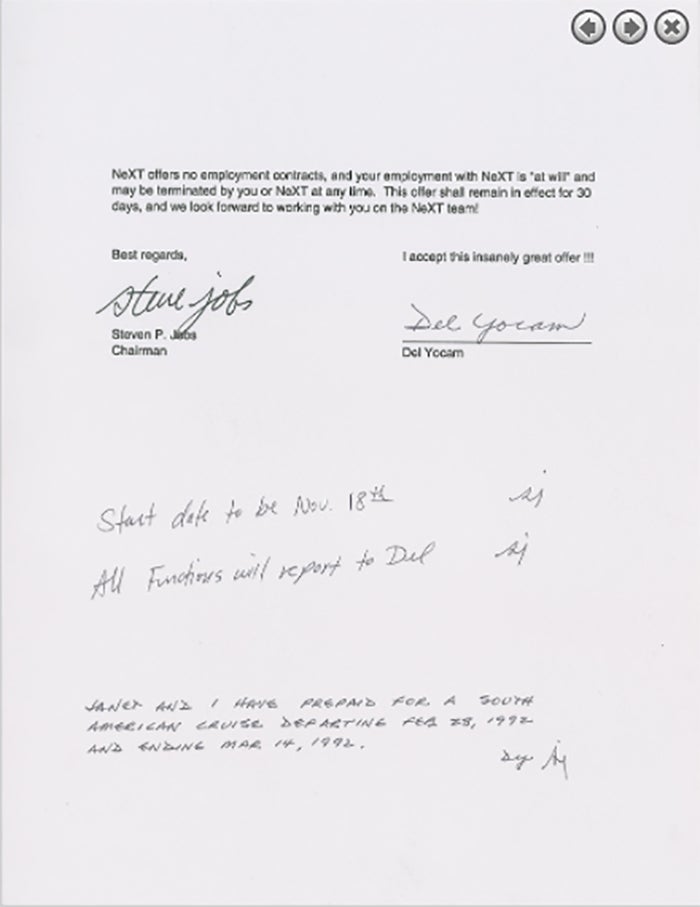 Although he accepted the proposal, Del Yocam did not join the ranks of the technology giant NeXT, the company that Jobs founded in 1985, after being ousted from Apple over disagreements with John Sculley, the CEO that he had appointed.

Although Yocam was Apple's first COO and held other positions from 1979 to 1989, the same year of the offer he accepted a senior position at Adobe Systems.

Jobs returned to Apple in 1997 , when the company bought NeXT for $ 429 million and 1.5 million shares of Apple. The legendary computer entrepreneur passed away in 2011 at the age of 56.

In February, RR Auctions auctioned off other items related to Jobs , including an original contract for the Apple II PC signed by him, an original Apple Macintosh 128K computer from 1983, a performance bonus memorandum signed by Jobs, and an original hoodie from Macintosh for $ 800.

Currently, the same auction house is up for bid for a rare Apple I computer signed by company co-founder Steve Wozniak. It is estimated that it could sell for more than 400 thousand dollars.

There's also an Apple keyboard signed by Jobs and Wozniak , estimated to be worth more than $ 30,000, as well as Wozniak's rainbow glasses that could sell for around $ 1,000.

From Steve Jobs to Elon Musk, Similar Personality Traits Emerge: How Do Yours Compare?