Happiness Project: How Four Friends Are Building a Brand to Elevate Positivity and Support Mental Health

The clothing brand's four co-owners discuss their unexpected journey to launching a lasting and impactful business.

When a classmate tragically lost his battle with mental illness and died in 2017, high school junior Jake Lavin was hit with an overwhelming desire to help others who might also be struggling. And so at the age of 17, he started Happiness Project, a clothing line of hoodies, t-shirts and accessories centered around ending the stigma of mental illness that gets in the way of people seeking help.

Happiness Project immediately resonated with the local community. After a year and a half of flying solo, Jake was joined by his friend Joey DeFilippo, and soon after that, co-owners Mike Jones and Joey Ruben. Since its inception, the company, which donates 15% of its profits to the National Alliance on Mental Illness, has gone from shipping 50 orders a month to thousands per month.

Related: Zak Williams, Son of the Late Robin Williams, Is Willing to Get Personal for the Sake of Public Mental Health

We connected with the four co-owners, whose ages range from 22-18, to find out about how they launched and grew the brand, and how one day, they aspire to not be working out of a basement.

What was the starting point for Happiness Project?

Jake Lavin: When I was a junior in high school, a classmate named Nick Spaid passed away after struggling with mental illness. It wasn't a topic that people would want to talk about. I remember it was just really awkward, no talking in the hallways and no one was really saying anything. So I was like, “How can I make a difference? And do it in like a cool, fun way to make people start talking about it?” So Happiness Project was born and I started selling t-shirts just door-to-door, to friends and family. I continued working on it through high school, and then Joey DeFilippo hopped on the team. We worked on it for about a year and a half, and then once quarantine hit, we went full throttle on it and started working every single day of the summer. We're doing really well and hopefully going to be moving out of the basement pretty soon!

What have been your biggest hurdles and how did you overcome them?

Joey DeFilippo: We're still overcoming it as we speak! The biggest issue we have now is that there's so much demand for our product and we don't have enough supplies. Every time we stock something on the website, it's pretty much selling out within 24 hours. We've been getting hoodies printed at three different shops just to get them to sell. We're pulling strings left and right to make it work. 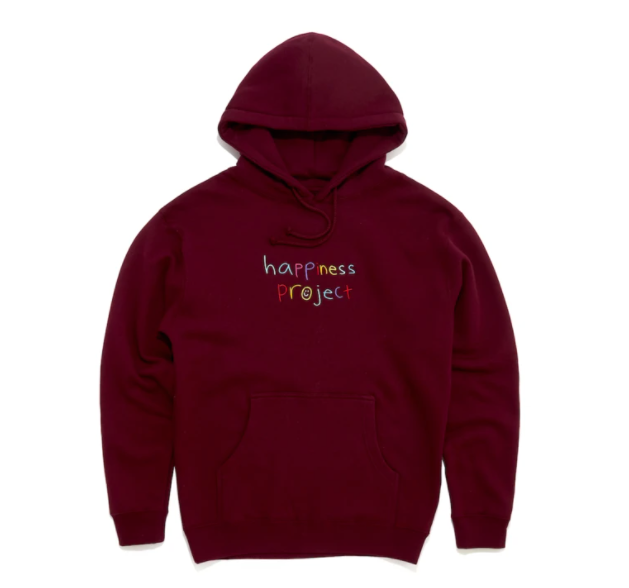 How have you gotten the word out?

Mike Jones: We’ve grown fast on social media. We now have close to 80,000 followers on Instagram compared to 10,000 at the start of this past summer.

Joey Ruben: I’ve reached out to many large influencers over the last few months and nearly all of them have loved our brand and the message we put forward. Some of the influencers who posted themselves wearing Happiness Project clothes include Addison Rae, Tyler Cameron, Kendall Vertes, Zedd, Louis the Child, Big Gigantic, and NLE Choppa.

Mike Jones: And a lot of our content on Instagram is not just about pushing our merch. We promote a lot of positivity, mental health tips and tricks and statistics. So people don't follow us just for the clothes. They follow us for the mental health aspect of it as well.

Related: The Dangers of Digital Fatigue, and How to Prioritize Your Mental Health

As your business grows, how are you adjusting the way you run it?

JL: At the end of the summer, we were trying to do every single little thing ourselves and burning ourselves out. It was literally 8:00 AM to midnight for four months straight. Tie-dying hoodies for six hours every day can get pretty draining! So we're starting to delegate roles and we now have a couple of people who handle fulfillment for us, and we have someone who does customer service.

MJ: We’re really inspired by the way Lululemon approaches management. We don't want people working for us, we want people to work with us.

What’s been key to successfully working with friends?

JL: Transparency. If you're working with friends, you can be holding each other accountable, but you want to be transparent at all times. No one should be out of the loop. Everyone should be on the same page together because that's how riffs happen.

Related: Welcome to the Era of the Anti-Hustle

What are your future goals?

JR: We are planning on drilling down on content creation in 2021. We want to add real value to our followers' days and not just fluff. In order to do this, we have launched our TikTok page, where we post positive and uplifting content. In just over a month, we have gained almost 150,000 followers. We have also set up a text list where every single Monday, Wednesday and Friday our subscribers receive a new happy reminder or positive message!

JD: We also have a lot of unique designs and amazing products coming out that we’re really excited about. Now that we’ve seen a lot of success with our clothing, we really want to zone in on the actual mental health side of the business going forward into the new year.

MJ: Our biggest focus in 2021 is the “project” side of Happiness Project. While the pandemic put a hinder on it, we’re really excited to start doing fundraisers and mental health initiatives not only in our community and Chicago, but across the country. In our long-term vision for the brand, it’s our goal to be known as an ambassador in the mental health community first, and a clothing company second.

JL: We’re excited to announce we donated over $50,000 in 2020 for mental health research and going into the new year, we’ll be partnering with the AFSP (American Foundation for Suicide Prevention). Our entire team will be receiving training from them about mental health and suicide. One goal of ours has always been to go on a college tour with a speaker to talk about mental health. And this training will allow us to become that speaker ourselves. Together, we hope to be way more than just clothes in the next five years. We want to be an ambassador for the mental health community, providing our own resources, hosting events and making a difference in people’s lives.