The photograph of the summit of the highest mountain in the world filled with waiting climbers reveals a management problem that could be similar to the one that governs your to-do list. This is how you could clear it.

By Eduardo Scheffler Zawadzki June 7, 2019
This article was translated from our Spanish edition using AI technologies. Errors may exist due to this process. Opinions expressed by Entrepreneur contributors are their own.

I see the image on my cell phone screen and I want to think that it is a hoax. One of many photos altered by Photoshop that make us see things that are not true. The tweet belongs to The New York Times, a rigorous medium that confirms any information before publishing it. It shows the top of Everest , the mythical mountain that was conquered for the first time on May 29, 1953, saturated with mountaineers who advance in single file towards the highest place on the planet. 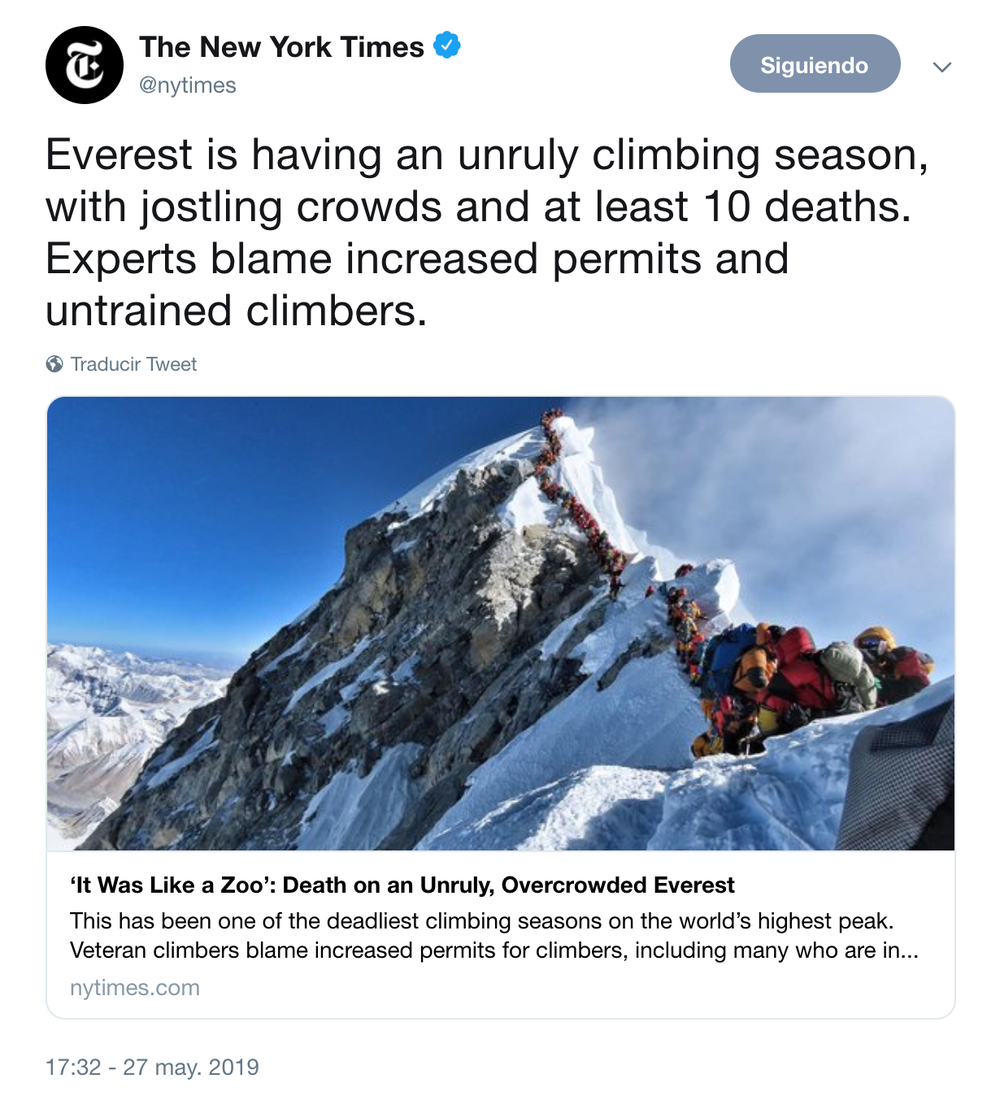 Dressed in jackets and windbreakers in multicolored fabrics capable of repellent cold, they try to advance like banshees towards the point where they can turn around to return victorious to their place of origin. But can not. There are so many that they have caused an absurd traffic jam in the same place that 70 years ago had never been stepped on by a human being.

The image shocks me. Because of what it means and what it communicates. Because it could symbolize a world that is getting smaller, saturated and invaded. A planet that little by little loses its sanctuaries, its peaks, its quiet places.

The multitude of mountaineers at 8,848 meters above sea level inevitably reminds me of the hundreds of slopes that seem to fill each of the days of my working life. They are too many. They yell at each other, push and fight for the right they have to be in that space and place.

No matter how many hours I work, or how disciplined I am, the earrings find a way to multiply by forcing me to juggle to prevent one of them from falling down the gorge. In real time, I manage a myriad of fearless tightrope walkers who roam overhead demanding attention. Any misstep, any distraction, will inevitably fall to certain death, condemning me to despair.

How did we get to this?

In the case of Everest, the story began to accelerate after the ascent to the summit by Edmund Hillary and Tenzing Norgay 66 years ago. They were the first, but many more followed. The human desire to excel has drawn a huge number of people to prove to themselves and others that they are capable of conquering the Chomolungma (the name that the Tibetans give to the immense mountain). Today it is easier to do it than in 1953. The reason? On the one hand, the technological advances in the increasingly light and resistant mountaineering equipment; on the other, the change in the geography of the mountain itself. In 2015 an alleged earthquake knocked down the so-called Hillary Step , a vertical face of rock of about forty feet that required a last and superhuman effort before being able to reach the top. The disappearance of this pass dramatically facilitated the climb and opened the possibility for less-prepared mountaineers to achieve the dream of a lifetime.

The tourism offices of China and Nepal took advantage of the change in Everest to promote its climbing and offer massive permits creating a juicy niche for adventure tourism. Between April and May 2018, nearly 800 people reached the summit, beating the previous record of 667 climbs in 2013.

But the mountain is not ready for it. The ascent routes at the top are narrow and allow only a few climbers to advance at a time. Forcing it can cause accidents and deaths that could have been avoided (11 in the last two weeks).

In the case of our earrings, technology could be to blame . With information that arrives instantly and platforms that condemn us to be locatable every day of the year, 24 hours a day, the slopes that seek to reach the top accumulate somewhere in our head. Notifications interrupt us, pressure us, overwhelm us and distract us from those matters that we really should be attending to.

Both in the mountains and at work, the solution to the saturation problem seems to lie in management.

Just because an earring demands your attention through a ring or vibration does not mean that it has to be attended to in real time. You must be able to identify the importance that each one of them has and assign them a suitable place on your to-do list. If they were climbers, you should let those who have demonstrated that they have a reason and sufficient merits to be there to reach the top. This does not mean that there cannot be a new mountaineer reaching the summit, but he should be obliged to show that he has the ability to occupy a place at the top of the world.

If you don't set a limit, the slopes (and the climbers) will keep coming. Learn to say no. It's about recognizing your ability and accepting a sensible and appropriate workload. There are sure to be tasks you can't refuse, but negotiate sensible lead times then. Many times we are the ones who play the hero and we pretend to do much more than we can solve. We put ourselves at risk unnecessarily, we wear ourselves out and don't choose well the battles we must fight (or the mountains we must climb). Try to classify your tasks and tasks to be done and, as far as possible, follow the famous Pareto Principle: dedicate 80% of your time to 20% of your tasks (the most important ones!).

Remember that, both on the mountain and in life, you - and no one else - should be the priority. A mind saturated with slopes to the point of generating paralysis does not serve you, your work team, or your business.

Not to that mountain that you intend to conquer.